Momentum Heading Into 2018 is Huge!
Dear Reader,
For the first time in 11 years, more than half of the country believes the economy is good or excellent.41% expect it to continue to improve next year, which puts expectations near record highs. 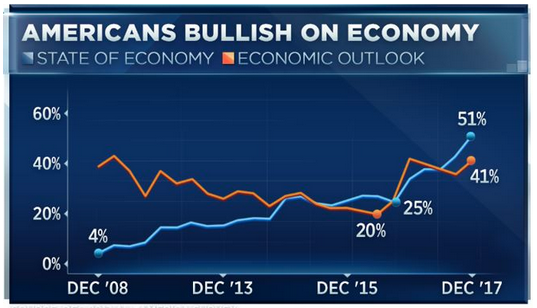 Less than a year ago, you could find headlines in the Los Angeles Times and New York Times about President Trump seeing GDP over 3% being a pipe dream.

The Congressional Budget Office, which has the worst forecasting record, has projected U.S. GDP to hit an average of 1.9% well into the next decade.

Defying all of this, the U.S. achieved a higher-than-expected annualized growth rate of over 3%, and the latest forecast by the NY Fed is now 4%.

The White House is doing three very fundamental things that will help to continue this economic optimism.

1. It’s cutting regulations by a 22-to-1 margin. This is big because regulations are a misallocation of time and money, and for the most part, they’re created to crush the little guy.
Crony capitalists use thousands of regulations to make it impossible for new competitors to join the marketplace. They also create a false sense of safety for consumers and send billions into bureaucracy compliance, rather than improving sustainable businesses.

2. It’s making a HUGE tax cut. Of course, on a dollar basis, the rich are going to get the larger amount. It’s basic math: 1% of the population in the U.S. is paying for 43% of the income taxes, so they’re going to see their taxes reduced by a larger number.

And in the end, never forget that the money is yours to keep – tax cuts are just a reduction on forced theft from our fellow citizens.

3. The power of suggestion. The day President Trump announced he was running, I said this: “Trump understands the power of suggestion better than anyone. He makes 100-million-dollar real estate deals by using it. It’s in his DNA. Americans have never experienced it on this level, and if he wins, which he probably will due to this mastery of suggestion, he may even be able to turn this sinking ship around as optimism spreads and the wealth effect churns the engines of the U.S. economy.”

The power of suggestion, along with his voters oozing with optimism, is undeniable. It’s helping the economy, and from consumer spending to small business, things are picking up.

In our opinion, the trends that are working will continue to work in 2018.

We are especially turning bullish on some of the critical metals that find themselves in supply deficits, like silver, zinc, and uranium.

Tomorrow, I’ll reveal the one stock that I am buying in the resource sector.

Look for our alert early in the morning.