The emergence of an unexpected BREXIT victory, followed by an even more unlikely event, a Trump presidential victory are the outgrowth of the global elites having far exceeded their [almost] unspoken, unchallenged rule of the world, accomplished mostly by controlling the world’s money.

Money.  One of the most common words in every language, yet the least understood, and by preference and design re the moneychangers.  We will address “money” solely from a US perspective, not out of arrogance, but because money has a lawful definition that has been turned upside down by the likes of Rothschilds and other banking elites.

We have been down this road before, but people either do not get it, do not care, or are so woefully ignorant beyond salvation.  There is only one form of money [also true throughout much of the world but lost in globalization over so many decades], and that form is in gold and silver.  The Coinage Act of 1792 established silver as the monetary money of account in the United States, and while the government and federal courts still refuse to acknowledge it, that law has never been overturned and still applies, [at least it is supposed to apply.]

A U S dollar is not a piece of paper, such as what circulates today as fiat Federal Reserve Notes.  They are not Federal; there are no reserves; and they do not even meet the definition of what a Note is.  Yet, [almost] everyone around the world accepts the worthless fiat, spending their lives working for it, willing to steal, go to jail, even die for the fiat, all without the slightest idea of the difference between a lawful dollar of silver and a “dollar” issued by the foreign banking cartel, the Federal Reserve.

A U S dollar is the standard for all silver coins and shall consist of 371 grains and 4/16ths part of a grain of pure silver, or 416 grains of standard silver.

A Federal Reserve Note, issued by the gangster cartel of foreign bankers, is a debt instrument.  All so-called legal tender in this country is debt.  Debt is the opposite of money.  You can thank the foreign cartel for having passed the Federal Reserve Act in December of 1913, in which the bankers finally took control of the money supply of the US, and turned the definition of money upside down to the extent few in this country, indeed the world, have a clue what lawful money is.

The greatest growth and prosperity in the US occurred in the 1800’s when gold and silver were the only form of money.  The biggest change began starting in December 1913, and just over a century later, the entire world is awash in debt-considered-to be-money-but-is- not!  For anyone to say there is not enough gold and silver in the world today to support a specie-backed currency is merely espousing banker gibberish.  It all all a matter of price.  Plus, by using gold and silver backing, the money changers and the governments they control would be too constrained in the fiat paper money they issue without any backing whatsoever.

Even with this brief, but totally accurate depiction of what money is, people prefer to believe in the lie, that lie being the biggest Ponzi scheme ever, Federal Reserve Notes, debt instruments accepted as real money.  Fiction takes precedence over reality.  It is no different for the EuroZone, another forced-upon-the-people fictional Ponzi scheme where unelected bureaucrats from Brussels dictate European lives, to their detriment.

The chart below is a more current depiction of the value of gold and silver as true money over anything else.  Note the price stability between the arrows at the bottom of the chart, between 1865 and 1973, with the question, “WHY?”  The answer is deceptively simple: during that period of time, oil was priced in gold!  In 1973, the banking cartel, through yet another puppet-president, Nixon, closed the gold window.  The financial world has never been the same since.

That period of time also marked the establishment of the petrodollar as the world’s reserve currency wherein all business transactions had to be settled in fiat Federal Reserve Notes, more widely known and accepted as the “dollar,” to this day.  Foreign countries now had to buy Treasury bills/bonds as their foreign reserves.  Look at how the [unsustainable] growth has risen.

Both charts from an excellent article by Grant Williams, The Death Of The Petrodollar.

The global banking cartel has been so cunningly deceptive and so well-organized to pull off this incredible scam on the world to the extent that most remain in the dark about their being financially stripped by the moneychangers, all in exchange for worthless paper.

Europe has not done any better.  According to Eurostat data, €213 billion of taxpayers’ money – equivalent to the GDP of Finland and Luxembourg or more than 3 years of all military expenditures of the Russian Federation – has been permanently lost as a result of the various bailout packages in the EU. Statistics from the EC Directorate General for Competition indicate that more than €1.5 trillion was used in different forms of rescue packages between 2008-2014.  In other words, bail out the bankers at the expense of people.

Source: The Bailout Business In the EU

Europeans can point fingers at and criticize President Trump all they want.  Every time anyone points finger at someone, there are still three more point back at them.  What made BREXIT and Trump possible is the insanity of the world in which we live.  The US has Trump.  Europe has Merkel and Brussels.

We would like to say that Trump is at war with the Deep [Political] State in the US, but in truth, it is the Deep State fighting for their non-Hillary existence in keeping their losing grip over this country, and by extension, Europe, our 51st State [of chaos].

When elite-puppet extreme, Barack Obama, passed the massively expensive and equally massively failed Obamacare, he falsely stated to the people of the US, “If you want your present healthcare, you can keep your healthcare.”  What a disaster.  With that explanation, perhaps our European readers can appreciate a similar disaster confronting them: “If you want your refugees, you can keep your refugees!”  How has that been working out for Germany and Sweden, amongst a host of other countries losing their national identity and unable to point the finger at the perpetrators, Islamic terrorists.  Shame on Europe, and now shame on Canada for trying to get Islamicphobic laws passed to prevent exposing the Islamic terrorists for the rape, riots, and deaths they are creating.

Keep your Merkels and Brussels non-leaders.  What most Europeans fail to realize is that as goofy as Trump may seem to them, he is a breath of fresh air in fighting the fascist state- controlled federal government.  All of Europe have their collectives heads up their ass by allowing the destruction of their own nationality.

Whistleblowers, like Snowden and Assange have done more to expose the criminal spying by all governments, yet they are treated as criminals for their brave acts, while the CIA and the British government-run-amok trumpet their criminal spying activities and their theft of national identity and freedom of their citizens with impunity and no fear of government reprisal.

It is this never-ending kaleidoscope of insanity by world leaders, [Trump, May, and Putin get a pass, for now] that those who have been buying and holding gold and silver continue to question when will sanity return[?], for when it does, both gold and silver will likely reach price levels never seen before.

Who knew the corrupt bankers could keep their Ponzi schemes alive and functioning for so long, way past the expiration dates of sanity and reason.  We stopped trying to guess when reason would prevail back in 2014, but we have never wavered in our conviction that one day, the ownership of physical gold and silver will be a God-send to individual holders.

Speaking of criminal activity, where the “war on drugs” did nothing more than criminalize large numbers of Blacks and Latinos in this country, [yes, Whites, too, but to a far lesser degree], it has been a massive failure.  Now, we are about to engage in the “war on cash,” where the further criminalization of financial transactions outside of banking cartel- controlled system, as well as the criminalization of financial independence will all become yet another failed “war” against the people by the governments that supposedly serve them, but not before untold damage is wreaked upon the populations.

There is no clear answer as to how the “war on gold and silver,” will work?  It will create some havoc, to be sure, but no government “war on ____” has yet to work as intended.
All we can say is to remain steady in resolve and keep your physical PMs close and, as importantly, as private as you can.  Those without will be more than ready to “turn in” those with, and probably for some kind of traitorous reward, so be careful.

The charts, for us, are the best framework for depicting where price is headed, or not headed, as is currently the ongoing situation for PMs.  If you look at the weekly chart, it inescapably says price remains locked in a sideways move.  One day, there will be a breakout, but no time soon, as these charts suggest. 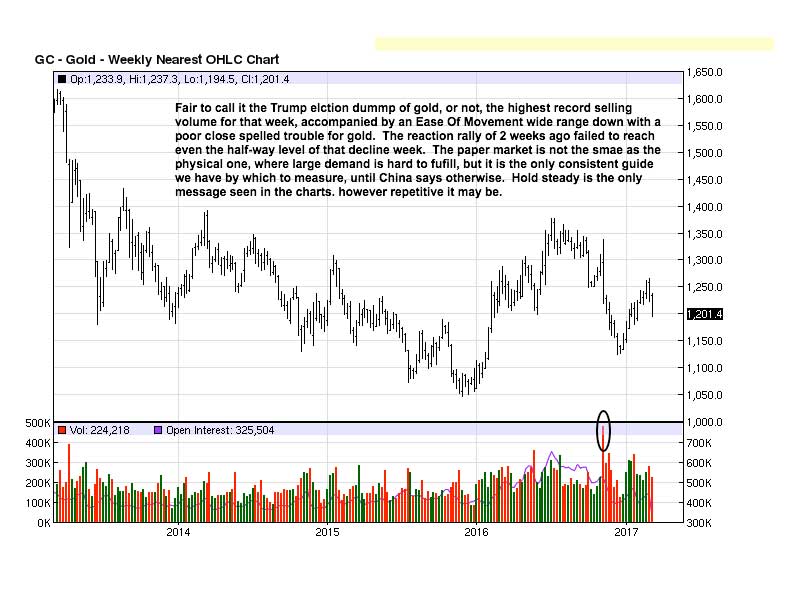 It appeared that gold was trying to make a statement for the upside, but the manner in which the market was developing was not that of an upward trending market, which gold is not. 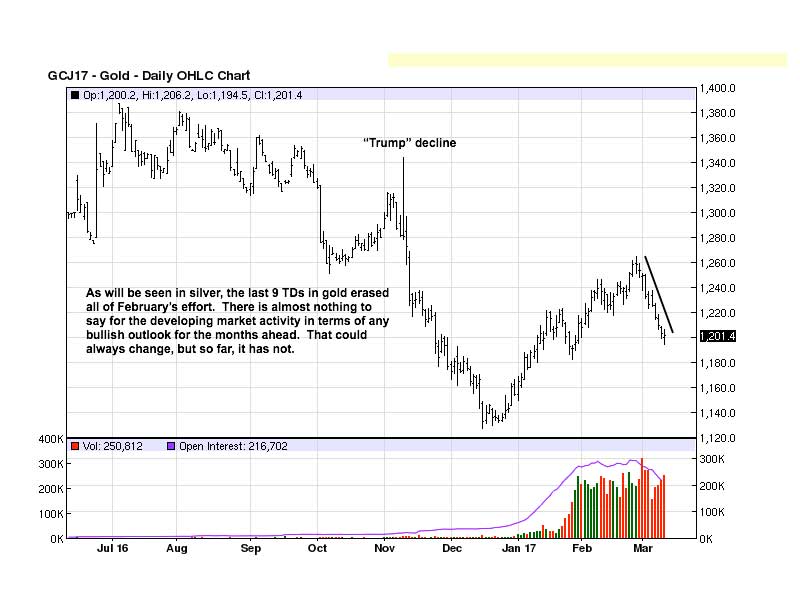 What was said for gold holds true for silver.  The rally from the December 2016 lows was of small range bars with little to no dynamic rallies to the upside.  The largest bars are still those that are to the downside, and it is large range bars that show Ease Of Movement. 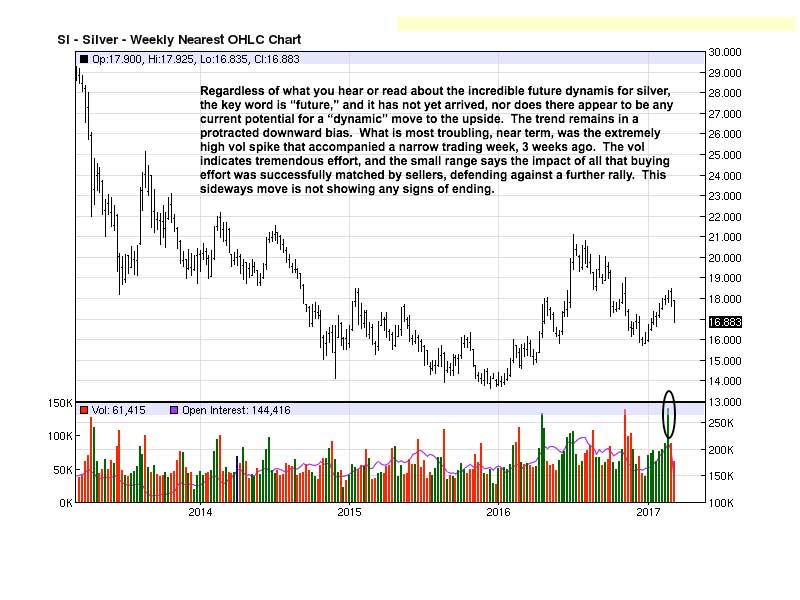 Silver made greater headway into the November “Trump” decline, not blaming him for it, but the development of silver has been slightly flatter relative to gold, and the Gold:Silver ratio is staying within a range, 71:1 – 68:1.  Nothing new to see here. 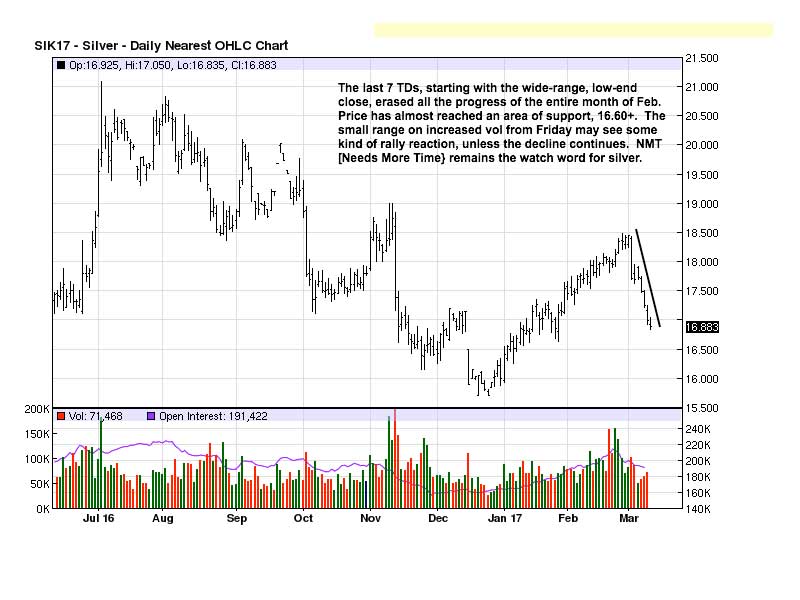