King Dollar: How Much Longer?

The Dollar is Safe for Now

The dollar accounts for 63% of central bank holdings.

The 2nd runner-up is the euro, which is 20% of central bank holdings, however, with all that is going on there, it’s hard to believe that the world would exit the dollar in favor of another currency.

Europe is clearly in the past. It’s been in decline for more than 70 years now, and its demographics show that the decline is far from over.

The U.S. looks like it’s also peaked and has been in decline since the late 1990s.

Without a doubt, we are in a transitionary period that will take decades to fully play out.

The world’s 3 biggest nation-state economies are the U.S., China, and India, with the U.S. in decline as a percentage of global GDP and India and China on the rise.

For 2000 years, India and China accounted for the largest economies on Earth, so if you consider the big picture of history, it’s not a real shocker that these two are rebalancing the world to look more like our past.

There is no conspiracy to the ending of the dollar as the reserve currency – it’s not a secret at all. 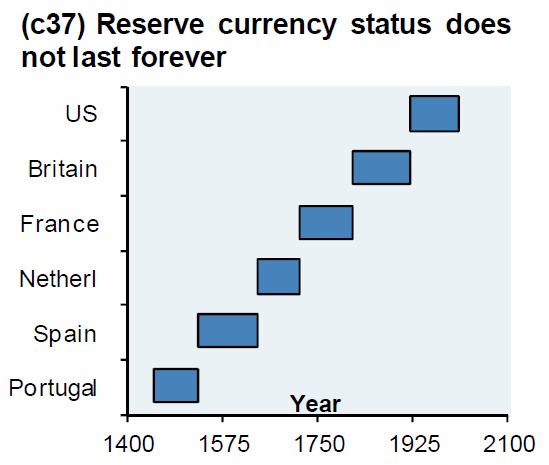 The World Bank’s former chief economist has openly proposed and advocated for the replacement of the dollar with a global supercurrency.

However, for the near-term, the dollar is very safe. Cross-border financing and trade have increased dramatically since the 2008 financial crisis.

As for now, no other currency has the global utility and liquidity the dollar has – not even close.

We continue to recommend silver, gold, and Bitcoin for currency diversification.

For the precious metals, if I had to guess where they stand today, I would say it’s the calm before the storm.

Never base any decision off of our emails. FutureMoneyTrends.com stock profiles are intended to be stock ideas, NOT recommendations. The ideas we present are high risk and you can lose your entire investment, we are not stock pickers, market timers, investment advisers, and you should not base any investment decision off our website, emails, videos, or anything we publish.  Please do your own research before investing. It is crucial that you at least look at current SEC filings and read the latest press releases. Information contained in this profile was extracted from current documents filed with the SEC, the company web site and other publicly available sources deemed reliable. Never base any investment decision from information contained in our website or emails or any or our publications. Our report is not intended to be, nor should it be construed as an offer to buy or sell, or a solicitation of an offer to buy or sell securities, or as a recommendation to purchase anything. This publication may provide the addresses or contain hyperlinks to websites; we disclaim any responsibility for the content of any such other websites.  Please use our site as a place to get ideas. Enjoy our videos and news analysis, but never make an investment decision off of anything we say. Please review our entire disclaimer at FutureMoneyTrends.com.