Did the Illuminati Crash the Oil Price?

Everyone, including those living in their mom’s basement, have noticed the oil price crash of the last 6 months. World crude went from $112 in late June to now $48 per barrel. That’s a 57% price drop. 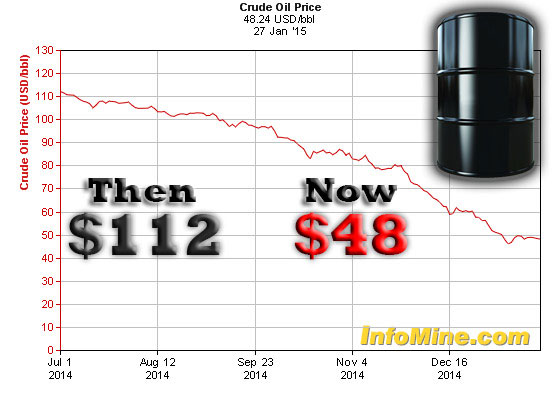 With such a dramatic move, all types of conspiracy theorists come out of the woodwork with their own sophisticated reasoning…such as:

My basic belief is that this was just the inevitable result of current supply and demand.

Which countries have increased their growth recently?
None that I can name. China, the biggest driver for demand of the last decade is slowing down.

Which countries have increased production?
Russia, United States, Brazil and even Iraq just to name a few.

The Fast Pace of the Crash

Now the fast pace of the crash could definitely be a result of manipulation or just crazy speculation. Once the market realized there was a glut in supply, no one wants to be left holding the bag or trying to guess where the bottom in oil is. Volatility definitely hurts markets and world economies; though oil importing countries should have some benefit. It is a double-edged sword for the United States however, if you want to see how bad, please, just read on and I will explain.

In late 2008 the U.S. produced 5 million barrels of oil per day (mbpd). By 2014 production increased an incredible 80% to 9mpdb. But the number of rigs pumping oil can be very volatile. The oil price crashed from $140 all the way to $40 preceding the biggest swing in the crash of the Dow Jones from 11,000 to 8,000. At this time U.S. oil rig count cut in half to under 200 from over 400. Today there are under 1,400 and crashing fast from a high of 1,600 in October 2014. There are so many new rigs, if you haven’t heard, because of these employed techniques: Horizontal drilling and Hydraulic fracturing. But these methods are used for getting what’s known as ‘tight’ shale oil that costs more to extract. Oh, it’s also called ‘fracking’ as slang.

Jobs are being cut left and right from the fall in prices due to the high cost of extracting in these new innovative ways to pump oil. Companies including Haliburton, BP, Baker Hughes, Civeo, Schlumberger have announced cuts explicitly accounting for tens of thousands of jobs. Texas alone could lose 140,000 jobs as predicted by the Dallas Fed two weeks ago. What’s worse than a normal recession is that these are not your average ‘recovery’ jobs, these are high paying skilled labor. Texas had increased production to an amazing 3.4mpbd from under 1mpbd just five years ago. That’s on par with Iraq and over a third of the total United States production taking place in just one state. About 5% of Texas’ tax revenue comes from oil and gas production taxes.

Another state is even more reliant on oil for revenue. Alaskan legislators left in April 2014 with oil at $107. Now with the 50% and great price plunge, a 80% decline in oil production taxes year of year is what they’re legislature is facing. Drastic changes will have to be made to the state budget. New governor Bill Walker will have to look at new revenue streams even as dip into the state’s savings fund. Their $3.5 billion budget deficit for 2015 is bigger than the entire state general fund in 2006. Their deficit to GDP ratio is over twice as off kilt as even the federal budget of the United States.

Continental Resources, a $17 Billion company Jim Cramer recommended, was down as much as 61% by December 15th from August 29th. It is now still down 43%. At one point it had a $30 billion market cap last year. It reached three year lows in fall 2014. 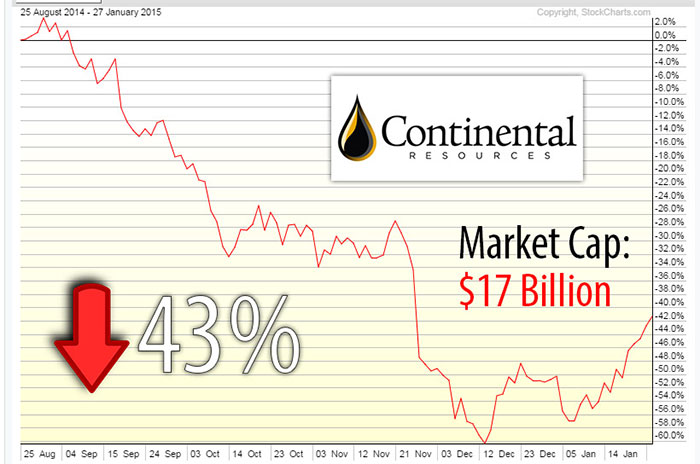 Sanchez Energy and Goodrich Petroleum stock crashed 80% and 90% respectively. Most companies have not even made a profit yet. The capital expenditures have exploded resulting in six straight years of negative free cash flow. The Oil & Gas Equipment & Services ETF is down 50% since July.

So energy companies and states with high production will be hurt, shouldn’t the rest of the market be okay? No, not at all. As Marin Katusa, chief energy strategist for Casey Research recently pointed out in an RT America interview, the debt in the U.S. oil market will spillover into an economic crisis that will be even bigger than the stock market crash in 2008 that saw Lehman Brothers go by the wayside. economy. Junk bonds from energy companies makeup 18% of all junk bonds. There’s $334 billion in debt for oil exploration and production companies. There’s $1.7 trillion in total debt for the full energy sector! According to a report by JP Morgan, three years of oil at $65 a barrel would likely result in a 25%-40% default rate across the energy junk bond market. Just think if oil stays around $50! Andy Xie, former head economist for Morgan Stanley and also the IMF said he believes oil at $60 will be the normal for the next five years! This will price the shale plays out of the market.

Remember the headlines, America was supposed to be energy independent by 2030! We were on the path to be the world’s top producer by 2016. In fact, if natural gas was included we ARE the world’s top producer. Yet, we still import 50% of our consumption. It looks like Chris Martenson was right and shale oil is not the great savior to the American economy so many hoped for. Shale oil is a bubble.

Already this sounds very bad, but oil could go even lower than it is today. Harry Dent, economist and author who predicted the Japanese recession and the stock market boom of the 1990’s, said he thinks oil will hit $32 this year. Even Bank of America predicted oil at $31 by the end of the 1st quarter 2015!

What if we could see a black swan: oil price crashing and exploding in quick succession?
If shale oil production crashes, world supply is tapered and then price should go up. After price spikes supply will pickup but demand will fall and then the cycle will repeat with a crash in prices. Originally it was the quantiative easing, money printing and easy money that led to the shale boom. Then it was the end of QE that caused the dollar to gain value and helped collapse oil prices. With oil down, we should see lower inflation and the Fed may need to come back in to print more to increase inflation targets. The European Central Bank already announced their own money printing of over $1 trillion and we’re barely a few months off of the Federal Reserve officially ending their asset purchases.

Currently the world is oversupplied by about 1.5mpdb. It may take over a year for shale oil to reduce production. By that time, oil price will rise and shale production will have to catchup later if the sector is not completely destroyed by the implosion of the energy junk bond market. Some OPEC countries are also hurting severely. Venezuela is seeing dangerous inflation levels of over 60% and shortages of basic supplies like toilet paper. Venezuela has been talking with Iran on pushing Saudi Arabia and OPEC to cut production.

What if Venezuela and Iran leave OPEC?
The next meeting is not until June 2015. Oil analyst Tom Koza for CNBC said if OPEC doesn’t reach an agreement to cut production by the first half of 2015 we could see oil slump to $35 per barrel. It’s not looking like they will budge. If they lowered production and raised the price, that would only save U.S. shale producers. OPEC wants to maintain market share, that is their best way to profit in the long-term. Saudi Arabia can easily survive at $60 oil for years. They could also increase their production from 10mpdb to 12mpdb. Their oil minister said they would not even cut if oil went to $20 per barrel.

Currently the world consumes 77mpdb (92mpdb if natural gas and other similar energy). OPEC produces 30mpdb or 38%, but this is much lower than their share used to be. It was 50% in the 1970’s. They’re reported to have the capacity to drive production up to 35mbpd. With current trade wars, currency wars, and even the new Cold War with Russia, there are so many potential black swan events to be scared of making any long-term estimate of oil’s price.

However, assuming no major shifts in the economy such as OPEC cutting production, more quantitative easing changing the dollar index, etc., I predict the following oil prices for 2015. Let me know how wrong I was when the time comes.