We are All Living in One Big Consumer Credit Illusion

From the Wall Street Journal…

“Abe Schilling, a 33-year-old car salesman in Great Falls, Mont., said he signed up for more than five credit cards over the past year, from issuers including Capital One Financial Corp. and Discover Financial Services , after he received offers in the mail. He also took out a $36,000 loan to buy a new Jeep Grand Cherokee.

Schilling, who currently rents his home, said the offers have been arriving as his credit score has improved. He previously had dozens of collections and other negative marks on his credit reports after failing to pay back bills. With a steady income and months of debt counseling behind him, Mr. Schilling says he feels confident in his ability to pay for his debts.”

This guy is a total idiot and is living in a fantasy world.

Unfortunately, he’s not alone – there are a lot more just like him.

Consumer debt, excluding mortgages, is at the highest level on record!

The average repayment period for car loans has also recently hit a new record of 69 months.

Consumer deficit spending is borrowed prosperity. It may help the economy today as a real spending stimulus, but what about tomorrow or next year?

These consumers not only eventually max themselves out, but also have to deal with rising rates, which could easily crush many of them.

***78% of full-time workers in the U.S. said they were living paycheck to paycheck, according to CareerBuilder.com

***56% of them actually admitted that their debt was already unmanageable and that they were in over their heads.

***Last year, BankRate.com came out with a startling study that 57% of Americans don’t even have enough cash to cover a measly $500 unexpected expense!

Government debt is also exploding to the upside, and all of the Federal Government’s debt is like an adjustable-rate mortgage, with liabilities on the books estimated to be over $100 trillion.

At some point in the very near future, we will see a systemic debt crisis. Both private and public debt are reaching insane levels, and the next crisis will be far greater than the 2008 financial crisis.

The coming debt crisis will include sovereign nations, as well as some of the most perceived successful first-world economies on the planet.

From Canada to Norway, and even China, the whole world is flooded with debt.

Our friend Craig Hemke, at TFMetals.com, recently pointed out the relationship between U.S. debt and gold.

“It could be said that, beginning with The Great Financial Crisis, gold got ahead of itself. Price had consistently risen with the accumulated debt through 2009, but, by 2011, it was considerably above the established trend. In the correction that followed and ended in 2015, you might note that price fell to roughly the same distance below the established trend. Perhaps this visual aid will help?” 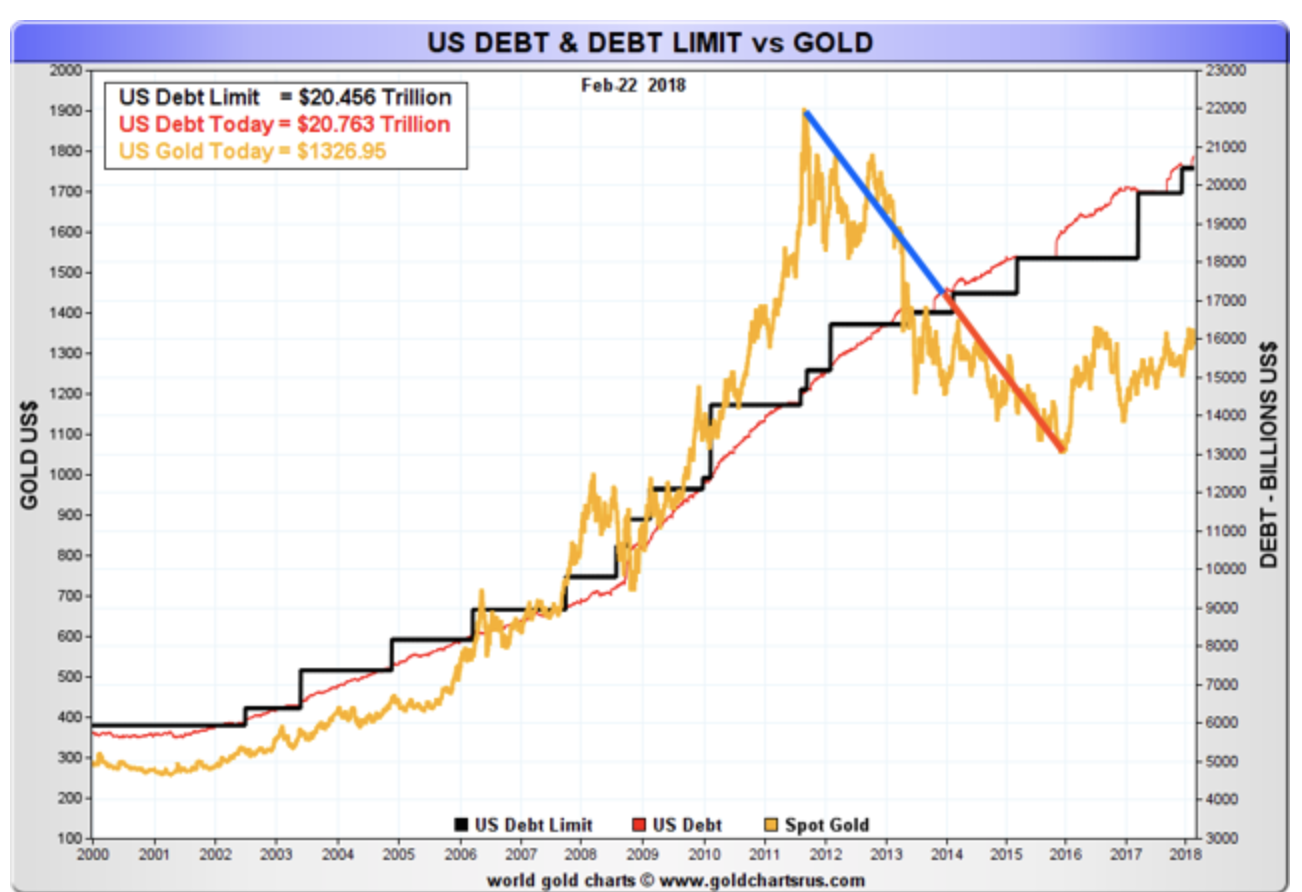 As pointed out last week, we know that the U.S. stock market needs a lower dollar to continue making new highs… something President Trump will fully support.

We also know that the debt is about to explode to the upside, with no real spending cuts even being talked about. In fact, as horrendously large as the U.S. military budget is, Congress just cleared the way for even more spending!

The nation’s debt will soar higher, consumers are one small recession or hiccup in the economy away from defaulting on all their new debts, and the stock market needs a falling dollar to continue making new highs.

The safest prediction of 2018 to 2020 is that the dollar will fall, inflation will become the story of the next 3 years, and gold, without a doubt, is about to make new highs and enjoy a very healthy rise that could eventually end in a parabolic spike higher if we end up seeing a real dollar crisis at the end of this decade.

In my opinion, you could not be buying gold at a better time here in early 2018.