The Next Recession is Here

The majority of Americans (65%) aren’t sleeping right now, and its due to money issues.

Earlier this month, the Federal Reserve reported that credit card debt has now surged over the $1 trillion mark! 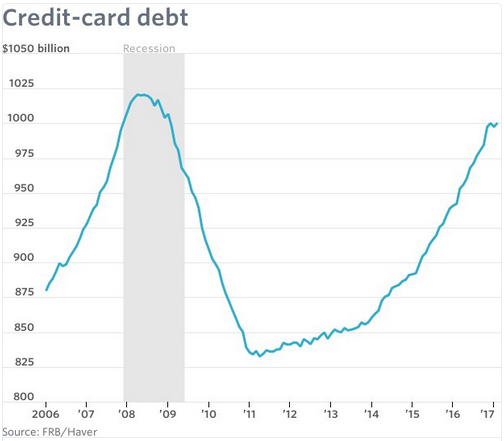 The economic numbers are turning very gloomy.From the home builder sentiment to the manufacturing numbers, it looks like the U.S. may already be in a recession.

For the past 10 years, the U.S. has grown at a rate that is less than its potential and historical average. For our own analysis, we believe that since about 2004, the U.S. has actually been in an economic depression – a slow motion train wreck where the middle class continues to grind down and fade away.

Growth has been around 2%, yet our debt has been increasing by 3 to 4% annually.

This is really the underlying support for gold and bonds right now. Stocks are up and will continue to hold up as foreign money makes its way into the U.S., and especially if the Euro breaks apart, we could see gold, bonds, and stocks make massive moves higher.

We live in very unusual times, however, seeing the dollar, bonds, and gold rally together has happened twice in the last 40 years, and both times, it ultimately led to gold making a record run.

As early as next week, the U.S. could be looking at a government shutdown. The debt ceiling needs to be extended, and a budget will have to be passed.  We could literally see a shutdown of the government, with a $4 trillion budget coming to a screeching halt because of $80 million going to Planned Parenthood and a $1.4 billion down payment for President Trump’s big, beautiful border wall.

To ensure that D.C. grinds to a halt, we also have sanctuary city funding and Obamacare subsidies that, if they aren’t renewed, will absolutely implode the (un)Affordable Care Act beginning on May 22nd.

Summary: Not only is the U.S. headed into a recession, but it’s littered with economic land mines that could throw us into a massive panic not seen since the 2008 financial crisis.  Take steps now to cut spending, reduce investments to core holdings, and focus on income growth.  You’ll want to be cashed up and ready to take advantage of any financial disaster.

Lastly, gold is being supported by strong fundamentals here – buy it.

We expect the physical gold price to make new 52-week highs in the early summer, and even new all-time highs are in the cards for 2017.

Have a great weekend,