Precious Metals in the Dumps: What’s Next…

We saw a correction, yes, a likely pullback given the rebound of 2016, but its performance of the past few months has been disappointing, to say the least.

I can’t go back in time, so let’s look at where we are right now.

For gold, the best rallies occur when we see a high level of short positions and extreme bearishness.

The precious metals sector, more than any other, is moved by sentiment.

Today, the gold bets are all bearish, to the point that we haven’t seen this high of a short position since 2015.

Here is a chart from our friend Marin Katusa, founder of Katusa Research. 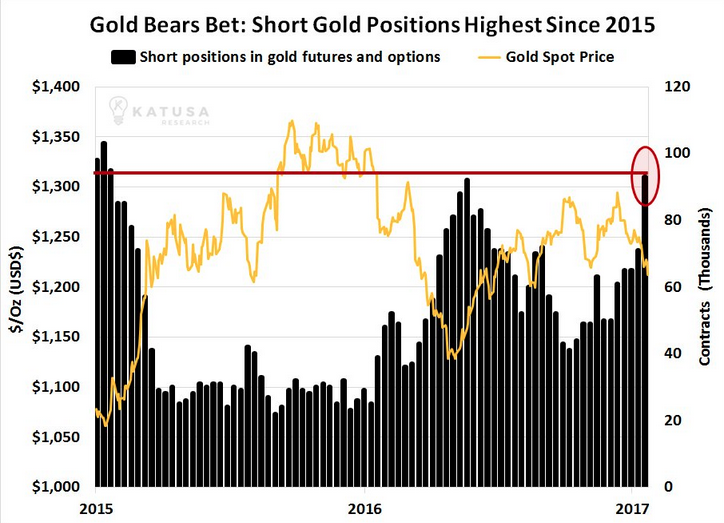 In our opinion, a gold rally in early August or September is a near certainty now.

Don’t forget that the fiscal year is coming to a close and D.C. still needs to come together to pass a budget and raise the debt ceiling. President Trump and the Freedom Caucus have already stated that without border wall funding, the government will shut down.

For silver, we see an epic rally coming.

The bottom line is no one wants anything to do with the precious metals, to the point that they are hated.

We need to see an uptrend confirmed, but in my opinion, we are within weeks of seeing this.

Look for more updates on this sector from us next week.