Is The Bear Market In Gold And Silver Ending?

In his latest weekend review, professional trader Dan Norcini provided an in-depth analysis on the gold market. We prefer to look at the charts and raw data ourselves with the aim to remain as unbiased as possible. Rarely do we refer to other analysts, but we have find great value in Norcini’s latest chart and market commentary. 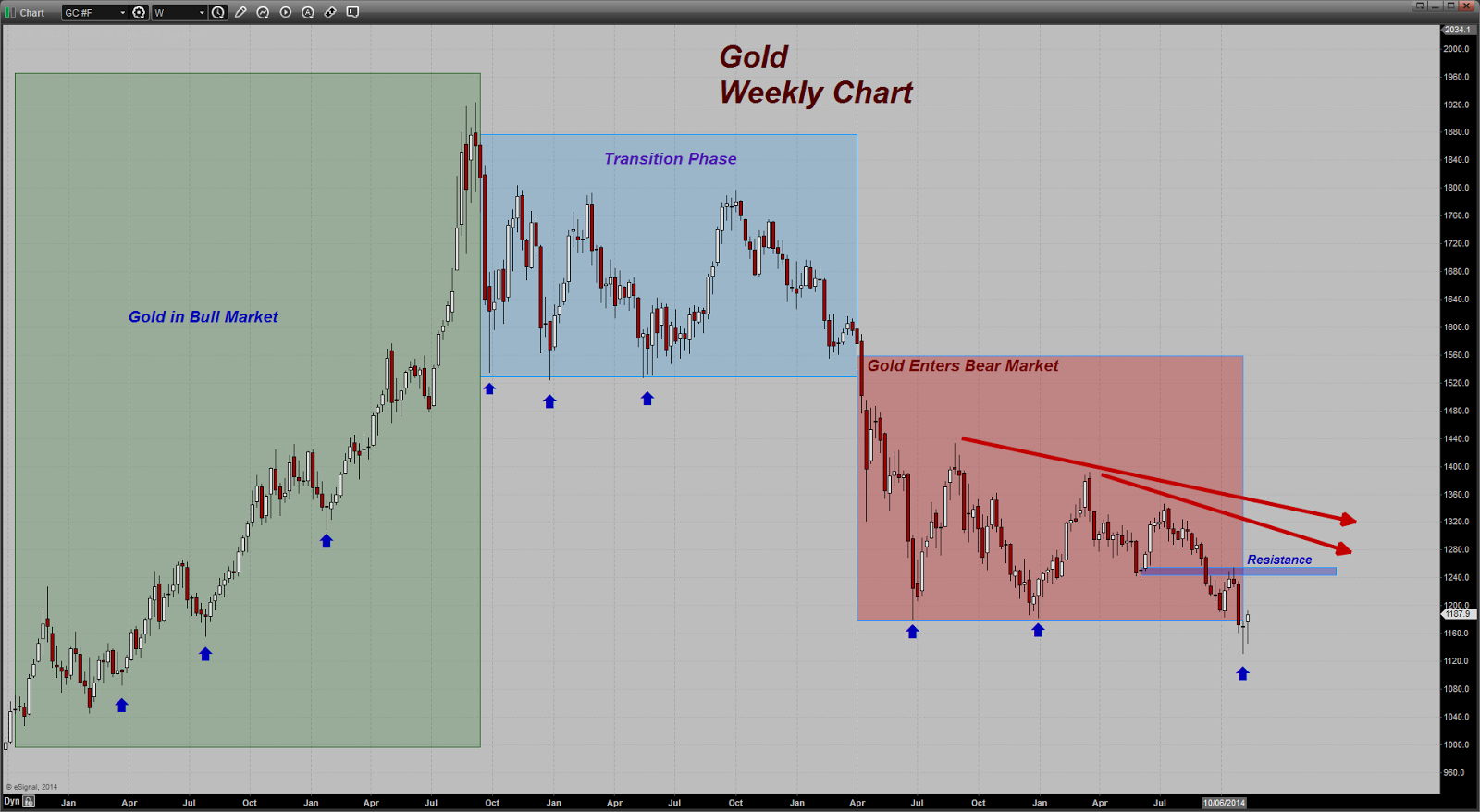 The key observation that can be derived from the above chart is the distinction between the three phases. Gold had a huge ramp up to the all-time high of September 2011, after which it experienced a huge continuation pattern and a breakdown to a lower trading range. The bear market of the last 3 years has materialized in two big trading ranges.

The other important observation is key in understanding that, potentially, the bear market in precious metals is ending. Let us be very clear here: the word “potentially” should not be understated. No one can know for sure what the future will bring. A continuous and unbiased monitoring of the charts and key market data (think of COMEX futures positions, sentiment, etc) are essential in understanding the market direction and assess the probability of potential bottoms, tops, trading ranges.

Back to the weekly gold chart. The stand-out feature on the price chart is the wild swing that is associated with tops and bottoms. For instance, the spike which had set the all-time high proved to be a reversal with a very sharp pattern and short-lived. The bottoms and tops of the trading ranges that followed were also sharp and had the form of spikes. In the words of Norcini: “Notice that in ALL THREE PHASES of the gold market (bullish, transition, bearish) these spike bottoms are present. What does this tell us? Simple – gold has a tendency to put in spike bottoms when it reverses direction.”

Notice on the chart how the latest four weeks have been characterized by a similar spike, somehow comparable to the huge top of September 2011.

How do we know whether the $1,130 price was the bottom? Evidence should come from the break through the downrend. The red arrows on the chart indicate the short to mid-term downtrend. If the ongoing rally would mark the end of the bear market, it is a must break through those trendlines. In other words, gold must climb above $1,320 in the coming weeks and months, and stay above that price, to have basic evidence of a new bull market.

This is what Ted Butler wrote to his premium subscribers past weekend: “More than ever, the current setup brings an old theme of mine directly into the crosshairs. To the point of redundancy, Ive written over the years that the speed and extent of any silver rally would be determined by whether JPMorgan and the other 7 big concentrated shorts added to short positions for the purpose of capping the price of silver. The events of the past two weeks bring that premise into sharper focus than ever before. With an assured reduction of potential raptor long liquidation, if JPMorgan and the other big concentrated shorts dont add significant new short positions on the next silver rally (possibly begun past Friday) silver will fly like a rocket to the moon.”

Follow the market, pay close attention to market developments and monitor changes in key market data with ongoing price action. That is the only way to stay on top and unbiased.