Another gigantic bubble is setting up, in front of our own eyes: the government debt bubble. And here is our best guess: we are on the eve of the euphoria phase in this bubble.
Central bankers around the world are truly going wild. That is no surprise, and we all have seen the monetary base going off the charts in recent years. But the point is that they do not seem to be caring: they will do “wathever it takes” (to quote Mr. Draghi) to fight deflation, and achieve a minimum of inflation.

The reason behind their thinking is known for a long time: with deflation, their debt burden becomes bigger, as debt in real terms increases, and interest payments become harder. This week, we had another confirmation of our point of view. ECB President Mario Draghi made it clear that he would be willing to extend ECB money printing, as well as increase the charge on banks holding money at the ECB. In other words, he is saying that negative deposit rates will be rolled out on a large(r) scale.

In the same announcement, we read this quote: “We have deflation, so you have to do something.” If you would think that only the ECB is engaging in extreme measures, then you would be wrong. The following quote comes from the minutes of the U.S. Fed from end of October:

“Several participants indicated that, in the current low interest rate environment, it would be prudent for the Committee to consider options for providing additional monetary policy accommodation if the outlook for economic activity were to weaken to a degree that seemed likely to undermine continued progress in labor market conditions and impede the movement of inflation…”

And here is even Goldman Sachs, predicting how central banks will continue to create debt. The first chart shows the predicted debt creation in the coming 24 months. 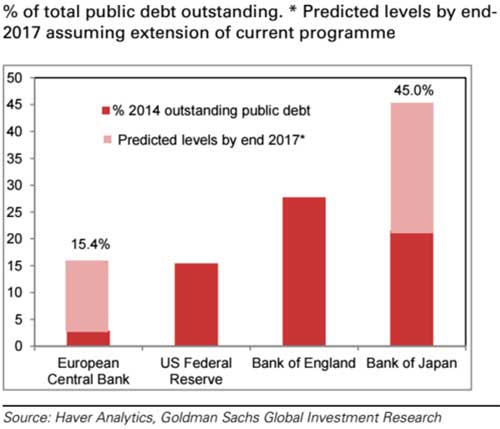 Next to that, we know that interest rate manipulation is one of the limited number of monetary policy tools that central banks (ab)use to get what they desire. And there again, the long chart (represented by the government bond yield) shows the frenziness.

As if 7 years of zero percent interest rates is not sufficient. 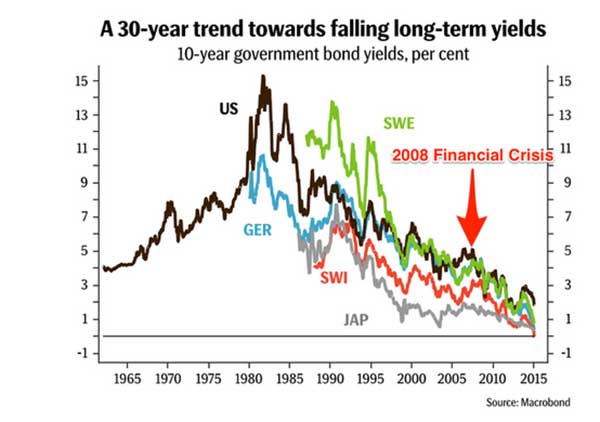 Extreme monetary policies cause a serious distortion in our monetary world. In such a world, gold is and remains the go-to monetary asset, as it protects wealth.

Although the price of gold can fluctuate, one should look to gold in two different ways. First, physical metal preserves wealth, so it is a mandatory asset in a diversified portfolio. Second, one can look at precious metals as an opportunity: as central banks will ultimately achieve some form of inflation, precious metals miners will rally strongly, as they are the most oversold segment in the stock market.

You better be prepared.