Why is Disinflation, Currency Wars and Slowing Monetary Growth a Dangerous Mix?

This article provides an exclusive insight in what was discussed in the latest Advisory Board which took place earlier in October. The meeting focused on the investment implications as a result of the disinflationary forces at work.

The inflation signal switched to “neutral” at the beginning of August and then very quickly it indicated “disinflation” once again. A rather dramatic move in the USD, commodities, gold and silver followed. As can be seen on the following chart, the signal works well in real-time.

Growth of monetary inflation is currently slowing down dramatically, as can be seen in the next chart. The bars in the chart represent the combined balance sheets of the Federal Reserve, European Central Bank, Bank of England, Swiss National Bank, People’s Bank of China and the Bank of Japan. 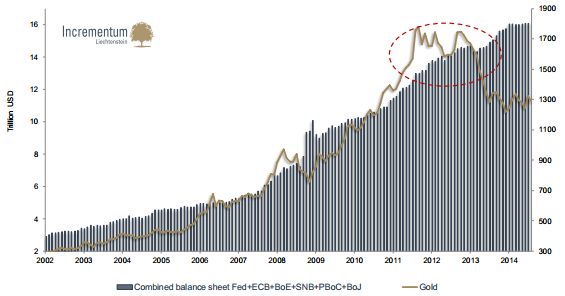 One can also see that monetary inflation is losing momentum in the broader monetary aggregates: 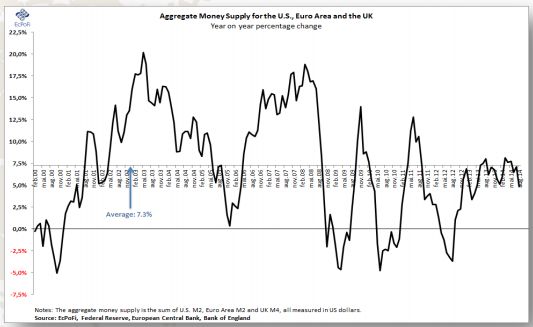 What is the expected effect of these disinflationary signals, along with a slowing pace of monetary inflation? Could there be a significant correction/crash looming for asset markets?

One should note that a crash is a very low probability event. However, as of 1987, central banks have become much more activist and have continually increased the size of their interventions. This means: Not only has the amplitude of asset bubbles increased, but also the probability of crash-like events.

Pater Tenebrarum, author of the financial site acting-man.com, points out that in an inflationary bubble, it is bad news when the momentum of monetary growth is slowing down. Moreover, it is almost impossible to define what level of money supply growth is necessary to support an asset bubble. So, the demand to hold money has increased considerably.

Investor sentiment remains extremely bullish, although not as extreme as in in 2000 (only sentiment amongst professional traders is very positive at the moment). This is a very strong warning signal, but definitively not a timing indicator.

The most important point: banks are no longer making the market anymore, because of legislation, the likes of Frank Dodd, etc. Banks do not do any prop trading in high yields anymore. This means that it has become a very vulnerable market. While there has been a huge amount of issuance, liquidity levels have fallen. This will have a major influence if the market goes down.

Jim Rickards, being part of the Advisory Board, shared his take on the ongoing development with currency wars.

The market expects interest rates to be raised by mid 2015. This leads to all kinds of dynamic outcomes, including a strong dollar, capital outflows from emerging markets, unwinding of the carry trade, weak commodities and so on. At the same time, there are growing deflationary pressures, as shown in the charts. The only reason the Fed will raise rates is inflationary pressure. Janet Yellen wants to address the labour issues in the US. If there would be one economic number that is most important for the Fed at the moment, it would be real wages. She looks at real wages as the thermometer of inflation. If labour markets are tight, wage pressure should increase and this would be a leading indicator for the Fed. Right now, real wages are not going up and labour market participation continues to decline.

So the market is discounting that the Dollar will continue to strengthen, deflationary pressure is increasing and the data suggests that the Fed has tightened into weakness.

Right now, we have the most hawkish FOMC in a very long time, but in January this will change. The two hawks Fisher and Plosser come off the FOMC and will be replaced by super-doves Evans and Lockhart. Also, Yellen will have been in the job for one year in January and she will feel that she’s in charge and that it’s her board.

So, you have a very hawkish FOMC today and we will have a very dovish FOMC starting in January. So the whole world is set up for a stronger dollar, a strengthening US economy and rising rates. The data and politics are showing deflation, a very weak recovery, a dovish board. Rickards his expectations are that the Fed will launch QE4 as of next spring. That will not only be a reversal of policy, but it will come as a shock! This will result in a rally in US stocks and emerging market stocks, a weakening USD and rising commodities.

Investors should not expect raising interest rates in 2015. Tapering has failed twice and it will fail again. The coming 4 months will probably mark a continuation of the current trend: very weak gold, higher rates, strong dollar, weak emerging markets and further deflationary trend.

The U.S. Fed will not rest until they get inflation. Therefore, they will have to print a lot more, which will be quite positive for gold.

If gold goes back to the 1,200 level a fourth time, then it could get dangerous as it might fall to 1,050. This should bring in some major support. But currently gold is still in an ongoing bear market. It is not given that gold has found its bottom yet.

There is a seasonal correction. Is it going to develop into a major crash? Fact is, that money is parked, malinvestments are built up and if the economy weakens, then the “magic hand” will come up and help us to some more malinvestments further down the track. So it’s a very kaleidoscopic world, where the mixture of technical and fundamentals makes absolute return investors think that having lots of cash is not the worst idea. If you don’t find a decent risk-return, don’t do it.