The U.S. dollar has seen a steep rally since last summer, putting a lot of pressure on the commodities complex. Crude oil went more than 50% lower while the CCI, a commodities index, has lost 30% of its value.

Interestingly, gold has not been a victim of the strength in the U.S. dollar. That could sound counterintuitive to most, because the perception of most investors is that gold and the dollar are inversely correlated. The inverse correlation between gold and the dollar has not been that outspoken. The inverse correlation becomes even more meaningless when looking at gold in non-U.S. dollar currencies (euro, British pound, yen, etc).

The first chart shows the U.S. dollar (blue line) and gold (yellow line) since September 2014. Gold went through a whipsaw pattern, but it has certainly not declined meaningfully. Moreover, gold has gone up in non-dollar currencies. 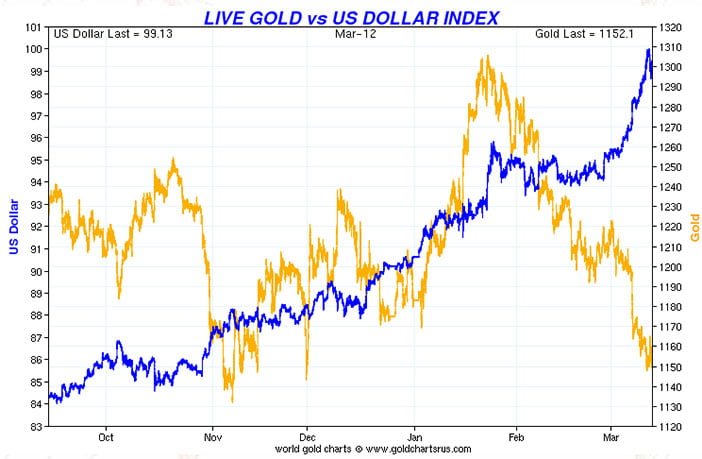 The following chart makes the point about the perceived inverse correlation between gold and the dollar. As readers can observe, there is no outspoken inverted move between the price of both assets. 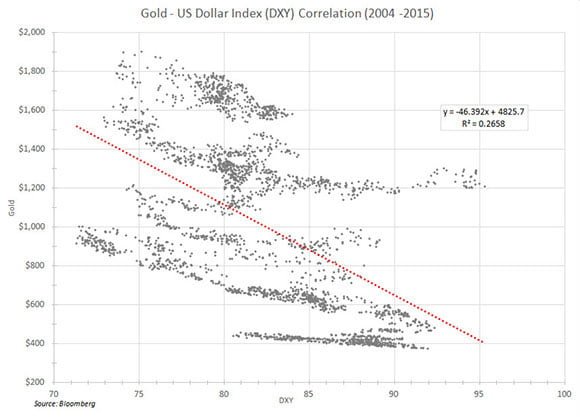 Still, it remains somehow intuitive that gold could have been higher in case the dollar would not have through its monstrous rally. In other words, with a weaker dollar, there would have been a higher probability of higher gold prices.

This leaves us with the question about the expected future strength in the U.S. dollar. To answer that question, we looked at the very long term dollar chart. 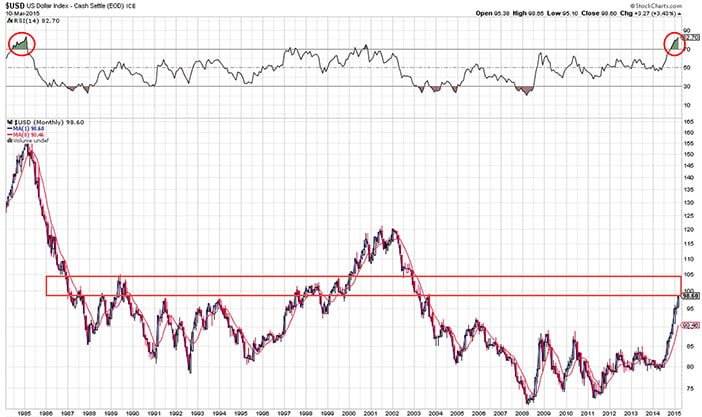 From a chart perspective, there are three conclusions. First, the steepness of the recent rise is unusual. There are no other instances in the last 30 years where the dollar has risen more than 25% in 9 months. Second, the dollar is severely overbought, as measured by the RSI momentum indicator. In fact, it has not been that overbought in the last 3 decades. Third, and foremost, the dollar is entering an area of powerful resistance. We have indicated that area with the red rectangle. There have been several (unsuccessful) attempts to break through that magical 100 area, going back to 1987, making that area even more important.

The key take-away is that the dollar can certainly go higher from here, but the rally is close to cool down. The recent strength in the dollar has been quite unusual, so it should not be realistic to expect a similar strength going forward. These factors make us think that the pressure on commodities, including the precious metals complex, is about to fade. One sidenote on that point: do not confuse inevitable with imminent, timing has always been the real challenge.