The Dow to Gold Ratio At A Decision Point

Gold has had a very nice bounce from its recent lows. However, the larger trend is still down, as the yellow metal is setting lower lows, as seen on the first chart.

The good news for gold bulls is that the pace of decline is slowing down significantly. That does not exclude the possibility of lower lows; it rather means that we are approaching the end of the decline.

The very long term trend still looks quite bullish. To make that point, we look into the Dow Jones to gold price ratio, going back to 1800. 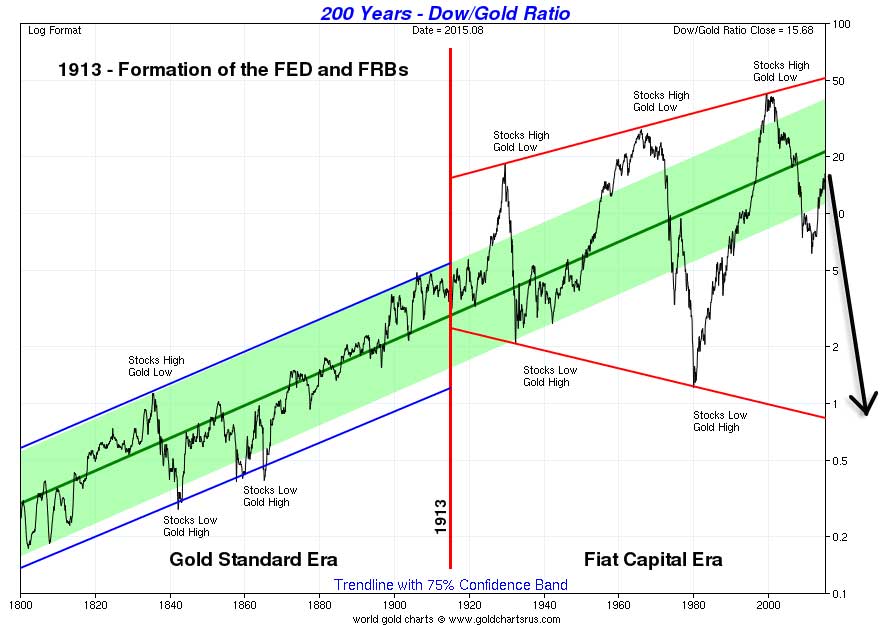 Today, we are at an interesting juncture, close to the middle of the uptrending trend channel. Historically, that point has acted as strong resistance for the Dow – Gold ratio, which means that gold coud rise going forward.

Next to that, we have experienced 3 tops but only 2 lows, another argument for a coming gold top. Today’s point is similar to the one in 1977, when the Dow – Gold ratio started a significant decline, after it bounced from outside the trend channel.

On a more general level, note on the chart how the highs and lows have become more aggressive after the Fed was created. That is no coincidence, as the monetary policies of the central bankers do not favor stability, even if they pretend to do so.

We will soon know whether the Dow – Gold ratio is favoring a major gold top in the coming years.