No Follow Through In Gold And Silver Although Bullish Signs

There are several reasons to be moderately bullish when it comes to gold and silver.

The first reason is related to November and December being tax loss selling months, especially in the U.S. and Canada. Under performing assets have the tendency to be dumped during those two months. So far, a momentum of aggressive selling in the metals and miners has taken place in November.

It pushed the gold price down to $1,135 while silver briefly touched $15.25. The GDX miners index temporarily touched $16.50. At that point in time, we thought there was a 50% chance for a total capitulation scenario mainly because we were in the first week of the tax loss selling season.

So far, the rebound in the metals and miners has been rather impressive with the huge reversal of December 1st. We consider this a refusal to achieve lower lows. In other words, the demand is high enough to overcome even tax loss selling.

The second strength we notice is more of a technical nature. Although we are certainly not technicians, we scan the charts for bullish or bearish confirmations based on basic chart patterns. The bullish signs we find on the latest charts are presented below (notice the blue trend lines and red annotations).

In gold, the trendline going back to July of this year is currently being tested a third time. The previous attempts did not show any sign of strength as evidenced by the “spike” of the candlesticks. The ongoing attempt looks much more solid. This is confirmed in the momentum indicator RSI which is gaining strength. What gold bulls would like to see now is a decisive break through the $1,220 level. That would somehow make up for the lack of follow through action afer the huge price rally of Monday December 1st. 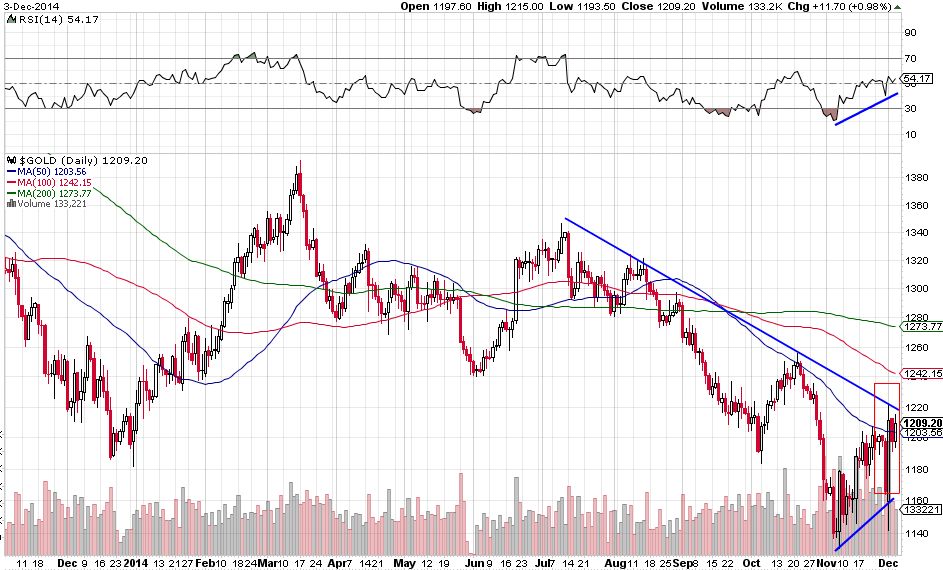 Similarly, silver is trying to break through the declining trend line. Since the bottom in November, the chart shows higher lows and a strengthening momentum (RSI). There is a large bearish gap between the prices in November and the huge support level at $19 which was broken in September. That gap should be filled in order to refresh the chart with bullish energy. 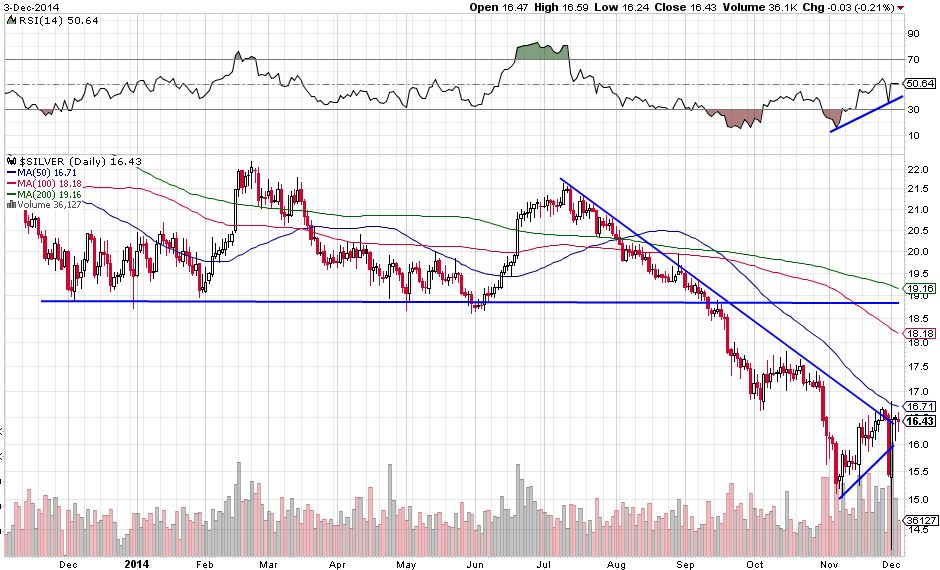 Another bullish observation is the huge (read: historic) support line in the gold to silver ratio. As the next chart shows (courtesy: Short Side Of Long) the support area in the 80ies goes back three decades. Only in the 90’s did the gold to silver ratio move decisively above 80, and it marked a multi-decade low in silver. Since then, the ratio only temporarily spiked above 80.

Reades should not forget, however, that there is much work required and many hurdles to overcome by the metals. They are in a long term downtrend. No matter how great the fundamentals look, the ongoing trend is down for now, and it remains that way until the metals are able to consistently reverse the trend.