Back in good old days of 2013 and 2014, most investors and pundits were shorting gold like there was no tomorrow. The need for a reliable asset like gold seemed to only exist in history books.

In 2015, however, the world appears to be a different place. Volatility is on the rise in the markets, and that should not come as a surprise right after the U.S. Fed has ended its Quantitative Easing program.

The volatility index (VIX) is in a structural uptrend in the last 4 months. Without any doubt, there is a correlation between the end of the extreme QE program of the U.S Fed, the collapse of oil and copper, and the rise of volatility in the markets.

Gold Is A Safe Haven

In such an environment, it should not come as a surprise that the demand for safe havens is back. To illustrate that, we collected 4 safe havens in one chart. Below is an overview of the price evolution of two safe haven currencies (the Swiss Franc and the U.S. Dollar), long term bond prices, and gold. One could rightfully ask the question why the U.S. Dollar is considered a safe haven given the massive debts by the U.S. government. It is hard to argue that the U.S. debt situation is healthy on the long run. However, if money is flowing to the Dollar in an uncertain environment, we can conclude that the market is considering it a safe haven for the time being. That is probably related to a lack of better alternatives, or, in other words, the Dollar seems to be the best performing currency relative to all other underperforming currencies.

The chart shows that the U.S. Dollar began a steep rise right after the end of the QE program. Interestingly, gold has been holding up quite well relative to the strong rally of the U.S. Dollar.

The Swiss Franc has always been a safe haven. The peg to the Euro has resulted in a loss of more than 10% in 2014. However, since last week’s unpegging, it seems that the Franc is back as a traditional safe haven. Look at the price in the last week. 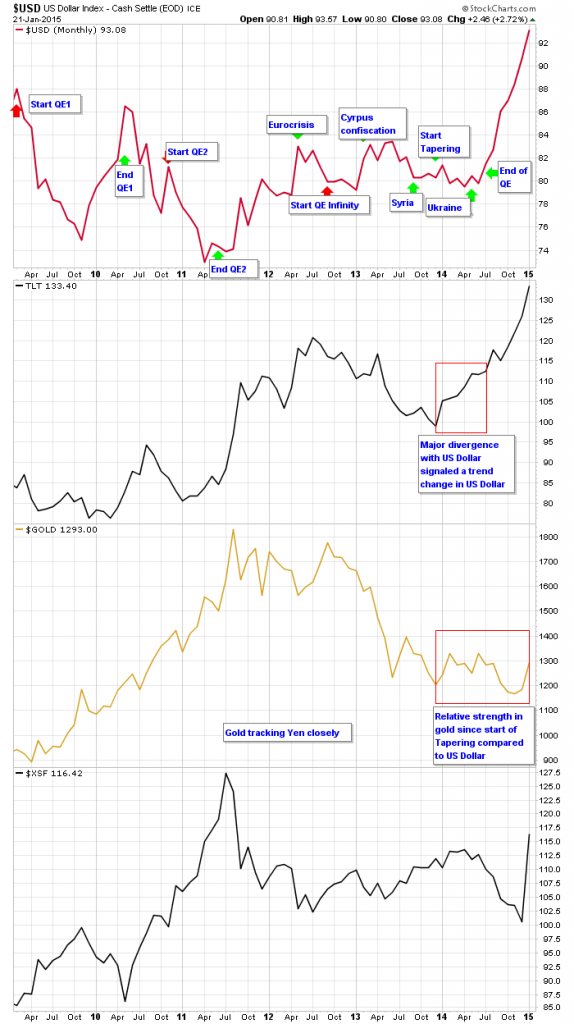 The key take-away here is that gold has not lost its luster, contrary to what mainstream media and pundits have been explaining in the last two years. Despite the big decline in the price of gold in the first half of 2013, gold has been holding up very well since then, and is clearly acting as a safe haven of late.