The beaten down commodities sector was THE most important theme in 2015, much more important than the U.S. Fed rate hike. We believe mainstream media has overly emphasized the importance of the interest rate hike.

Crude oil is the most important energy asset in the world. Investor sentiment for crude oil has recently reached the lowest levels ever. Only three times in the last 25 years did sentiment reach similar low levels. Even the 2009 crash did not create such a damage in sentiment.

The first chart illustrates our point, see lower pane of the chart.

Interestingly, when sentiment collapsed to levels as low as the ones of today, it marked a secular bottom. In 2002, it marked the start of a strong secular rally, which accelerated two years later.
The point is that we have most likely a reached a long term bottom in crude and most other commodities.

As a reminder, Mr. Draghi and Mrs. Yellen continue to work towards their inflation target, as confirmed in all their speeches throughout 2015. Sooner or later, they will get what they are aiming for. Given the oversold condition in most commodities, we expect a huge rally in commodities at a certain point.

While gold is going sideways in recent weeks, gold stocks have moved strongly off their lows. 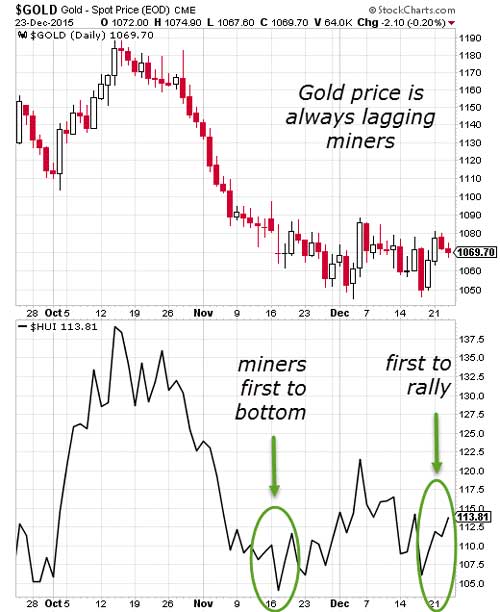 As the year comes to an end, and tax loss selling has run its course, we believe a gold rally should be in the cards in January. The key question is how high the next rally will go. For gold to start turning its downtrend, the next gold rally should go to $1,300 /oz. That’s some 25% above today’s levels, quite unlikely in this disinflationary environment.

Alternatively, a move to the $1,200 to $1,250 area would be helpful for gold bulls, as that would indicate a sideways pattern is unfolding, i.e. a bottom formation. Let’s see what January will bring.