Markets welcomed the new year. Major stock markets lost between 6 and 10% in a matter of five trading days! Never seen before, the damage is huge. Gold, meantime, is making its comeback. The yellow metal went several percentages higher in all currencies.

Throughout 2015, basically, gold has done quite well, except in U.S. dollar terms. Investors better not forget that gold is denominated in each existing currency. Although the world mostly looks at dollar gold, it is important to understand that gold should be monitored in other currencies as well.

The first chart shows gold denominated in several currencies. As one can see, only dollar gold lost at the close of the year. All other currencies on the chart show a ‘gain’ in local currencies between 0 and 35%. Obviously, this is the result of currency depreciation. Say Brazilian Reals did lose big time, so, consequently, real gold gained big time. 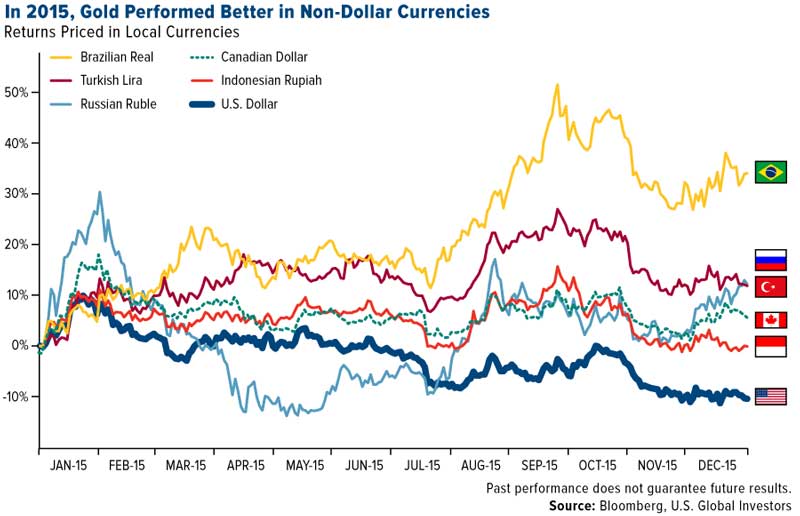 The good news is that gold in all other than U.S. dollars is holding up quite well. The bad news is that this is the last chance for dollar gold. As our long term dollar gold chart shows, the bull market that started in 2001 has created several trendlines. The steepest ones have been breached in recent years. Dollar gold is not trading at right at the last trendline, say the ‘slowest’ ascending trendline, as shown with the green line on the chart.

In other words, 2016 is about to become an important year for gold. Although gold in non-dollar denominated currencies is expected to hold up, gold bulls want to see a bounce right here right now in dollar gold. The trend started on January 4th 2016 should continue in which case it would prove that the bull market is still active.