Is Gold Preparing Its Next Bull Trend?

The sentiment towards gold remains very depressed. It currently stands at 32 (on a scale from 0 to 100), according to Sentimentrader. Readings around and below 30 are an indication of extreme pessimism.

For most investors, this is in line with their expectations, because precious metals prices and miners have been beaten down since 2012. Admittedly, this is one of the worst corrections in the last decades. At a certain point, one and two years ago, it seemed that there was one huge propaganda machine against gold in the mainstream media. No wonder everyone is negative about precious metals, and all major financial institutions keep on revising their gold price forecast downward.

When looking at the gold price chart (in USD), it is doubtful that someone can read something positive into it. 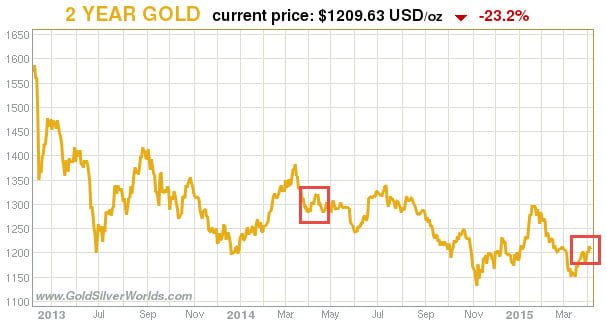 However … under the hood we are observing several interesting evolutions. Indeed, we stress the word “several.” More and more signs are pointing to a bullish setup in the gold market. Let us look at two major trends.

First, the price of gold in several major currencies is showing very bullish setups. The next chart shows the gold price in most major currencies since the first week of April 2014. Readers should compare the one year chart below with the one above, on which we have indicated the one year timespan with the two red rectangles. 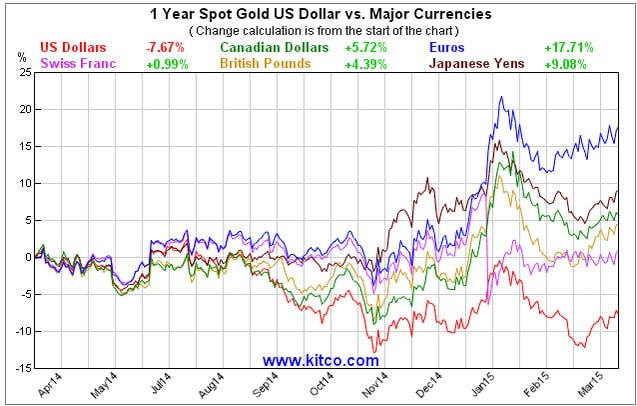 Note that all gold prices are trading higher, except gold in USD. That means that gold is trading higher everywhere in the world except for the countries which use the USD.

Second, gold miners are hedging their gold production again. As Reuters pointed out recently, “the volume of gold sold forward by mining companies rose by 103 tonnes last year, the biggest annual increase since 1999. That far outstrips an estimate given late last year of 42-52 tonnes.”

Reuters explains in that same article that hedging stands for selling future gold production. It allows miners of the metal to lock in prices for their output. It protects producers when prices are falling, but it also stops them capitalising on a rising market.

What is so special about that? Gold hedging has proven to signal the bottom and top of the gold market. Mining companies usually are the best contra-indicator as they unwind their gold hedges at the top of the market but hedge their gold at low prices at the bottom.

Do you see the contrast between the gold sentiment and the dollar gold price versus the indicators we explained above? It pays off to focus on the fundamentals and look how it translates into the charts. Sooner or later, prices will follow.