Earlier this week, an interesting article appeared, entitled “A Remarkable Proposition“. In it, Ted Butler describes a suprising evolution against the ongoing manipulation in COMEX. In particular, a paper was published by a Cornell law professor and CFTC staff counsel. Its main thesis was that many aspects of high frequency computer trading (HFT) may be illegal under basic commodity law. Up until now, it was assumed that HFT was legal, but disabused and impacted markets in disruptive manner on occasion. Ted Butler says that “Scopino makes a well-researched case.” The paper is 90 pages, but a summary can be read here:

Some interesting quotes from the study, specifically related to HFT (mind that “pinging scheme” is referring to HFT):

“One could argue that at least some of the trades in a high-speed pinging scheme are ‘false orders’ that are submitted solely to flush out other traders.”

“Given the high cancellation rates of trading by HFT firms, that behavior is arguably a component of many high-speed trading strategies, all of which are presumably illegal.”

Scopino’s paper states that HFT may be violating the law, which is remarkable as he is affiliated with the CFTC.

Another aspect that was not covered in the study was the monopoly of the largest traders on COMEX, which is another forbidden practice. Butler points out that the key to understand manipulation is to “convert the concentrated COMEX short positions into the equivalent real world quantities the short positions represent and do that for every regulated physical commodity, including COMEX silver. After all, commodity law has established that a commodity’s price should be determined by changes in actual supply and demand and that futures trading must not dictate prices to the real world. Every physical commodity, from oil to cotton to copper to silver has easy to establish world annual production and consumption data. By converting the concentrated short positions of the four and eight largest traders in every regulated commodity futures market to what that represents in terms of actual days of world production, this normalizes the data in a reasonable and practical manner that allows an apples vs apples comparison for every commodity.” 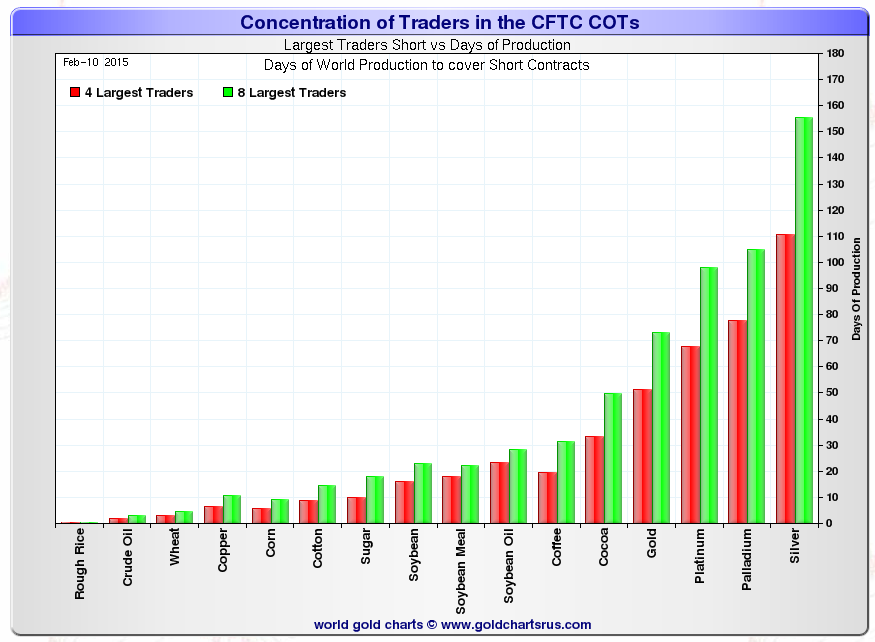 Especially in silver, the situation is truly out of balance, as evidenced by the previous chart.

Whether this paper will be a game changer is too early to say. But the number of attempts to stop the grip of COMEX on setting the gold and silver price seems to be accumulating. Combine this with an increasing desire from the East (China in particular) to have their say in the gold market, and you get a recipe for a potential game changer in the manipulation story.