Gold Steady In Major Currencies In 2014

While most of the time the gold price evolves in a similar fashion in the majority of the currencies, there are cases where gold diverges in a specific currency. Take the example of gold in Russian Rubles. As the first chart shows, gold has literally exploded in Russia lately; gold in Russia has doubled in a matter of weeks. Obviously that is a function of the collapse of the Russian currency. 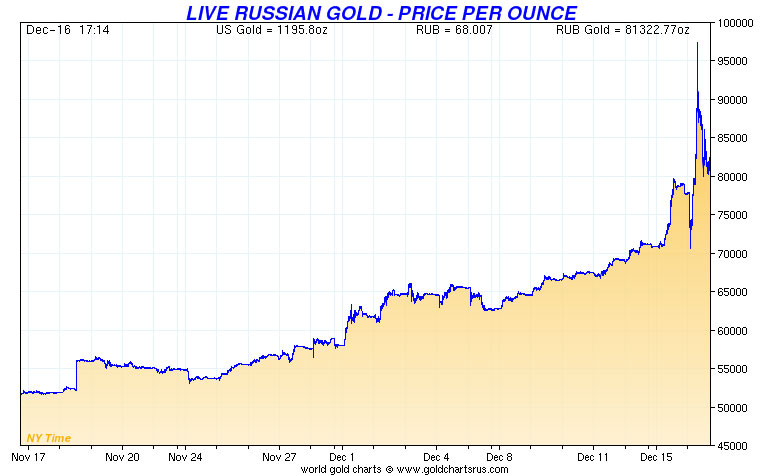 One of the key takeaways of this chart is that you better own gold before a currency crisis hits. We are clearly referring to physical gold here. It is during those times of crisis that gold “reveals” its protective power. Gold owners do not wish to use gold’s benefits, but they are safe when such a crisis occurs. It is really similar to having an assurance.

Now let us take a look at the price of gold in the major currencies across the globe. The second chart learns that gold has been steady, on average, in 2014. Although the yellow metal has fluctuated in price, there were no major ups or downs outside the price range. Gold in Yen, for instance, has increased in value with 10% while gold in Euros has 6% more value.

The chart also tells us that gold as an investment class has been stable in 2014. That is obviously not an interesting investment thesis when compared to some well performing sectors in the U.S. stock market. On the other hand, preservation of wealth is also a key objective from an investment point of view.

Another takeway of the chart is that gold in U.S. Dollars was the “worst” performer among all currencies, which makes sense as the Dollar saw a major breakout earlier this year. 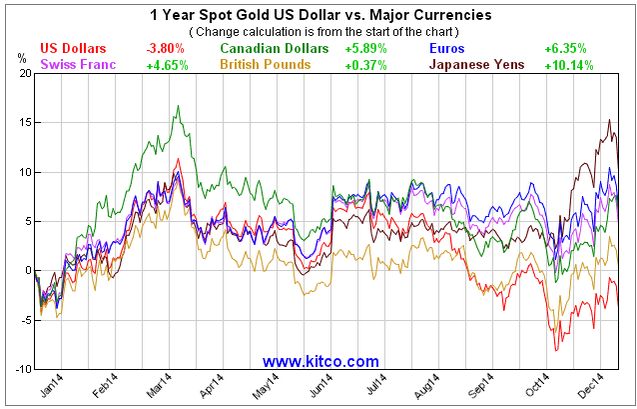 Now try to connect this picture with the extreme pessimism towards gold as broadcasted on an almost daily basis in the mainstream media. Something does not add up here. We do admit that there is no certainty that gold will go through another collapse, comparable to the one of April or June 2013, given the bearishness in the commodities market or a potential capitulation. On the other hand, if there would not be another breakdown in gold, it would be an important sign.

We believe these are the characertistics of a contrarian investment. Whether gold will see a comeback in 2015 is unknown. What we do know, however, is that gold in all major currencies could fare well in this environment because it is one of the ultimate contrarian plays. As investor Rick Rule often says: “bear markets beget bull markets and bull markets beget bear markets.”

Monitor gold in 2015 in all major currencies.