Why Is Gold “Suddenly” So Attractive?

What a difference two months can makes in markets. In December, literally nobody was talking about gold. Meantime, everybody is bullish, lead by major financial institutions.

Citi’s global asset allocation team already was bullish on gold, giving it an overweight recommendation, declaring that has “gone even longer” on precious metals. The asset allocation teams says: “To balance the portfolio, cash goes to underweight — in a negative rate world gold may replace cash in portfolios.”

Moreover, Bank of America Merrill Lynch said last week that “gold funds accumulated their largest inflows since 2009 and equity funds posted their longest run of outflows since 2008 in the last week as financial market turmoil continued to unnerve investors,” as reported by Reuters.

Now, we have said repeatedly throughout 2015 that gold’s reaction on the Fed’s “interest rate hike” narrative was exaggerated. Consequently, gold’s upward re-adjustment would be aggressive as well.

USfunds.com issued a very interesting comparison between January of this year and last year, which makes our point as well.

In January 2015, the five-year Treasury yield averaged 1.37%, while inflation, less food and energy, posted a tepid 0.2%. This resulted in an overall real rate of 1.35%. But this year, real rates have gone negative. With the five-year yield at 1.51 percent and inflation at a healthy 2.2%, real rates have dropped to negative 0.69%. This has helped make gold much more attractive to investors. For the month, as of February 24, the precious metal has risen nearly 10%. 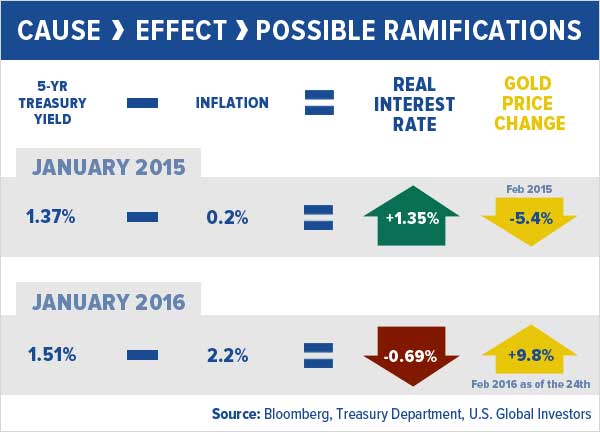 In closing, it is interesting to note that the San Francisco Fed is calling for a period of inflation overshoot. You read that correctly, inflation overshoot. The Fed sees possible benefit in allowing inflation to rise above 2% for a short period to achieve a better balance between the Fed’s dual mandates.