It has been an incredible year, so far, for precious metals. The move in gold this year is +17% and, last week alone, it rose +7%. Even mainstream media has jumped on the gold bandwagon. The Economist calls gold’s surge past $1,200 an ounce this week a “hedge against ignorance.” They are questioning the global economy and the fragility of global banks.

Chart-wise, the current setup looks great from an intermarket point of view. As the gold to Dow Jones ratio shows, we recently witnessed a breakdown, in favor of gold. 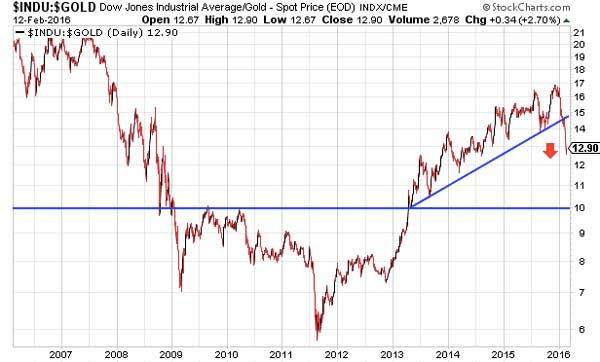 The more important view, however, is gold’s secular chart. It is easy to get caught up on the excitement in the gold market, as prices are jumping sharply higher. But where exactly do we stand in ‘time and space’?

Our secular chart provides the answer. We have added our ‘hidden trendlines’ in purple. Our hidden trendlines connect extreme swing highs and lows which were set in the last decades. Contrary to what most believe, those extreme swings carry a very important secular value.

Gold’s long term chart with the hidden trendlines basically show that the yellow metal is bouncing off secular support, right into secular resistance. So far, no breakout or breakdown took place.

The important price point to watch are $1080 on the downside and $1320 on the upside. In between those points, there is no trend change. Gold remains in a correction within its long term bull market, until it structurally breaks below $1080.