How Far Can Europe Boost The Price Of Gold

The price of gold is showing encouraging signs. A basing pattern, which has been in the making for a year and a half, seems to hold up quite well. That is in contrast to the doomsday prophecies of pundits on mainstream media who predict $800 gold.

Although Dollars gold looks god, the Euro gold chart looks even more constructive. It seems that the breakdown of early 2013 is offset by a long stabilization period. There is even a potential for a significant breakout. As the chart below shows, Euro gold is attempting to break above the long term resistance line, marked in red, which goes back almost a year and a half. One day does not make a market. Confirmation of the breakout is required. The gold price should stay above €1000, and, ultimately, it should find support around that price level before going higher (in order for old resistance to become new support). 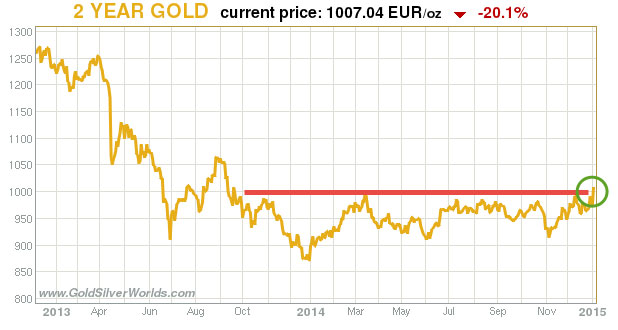 As the above chart shows, the price has attempted to break through the resistance line five times since mid 2013. So a lot of “energy” has been building up, making a stronger case for a breakout.

It is no coincidence that Euro gold is attempting to break out. On the one hand, the European currency has been decimated since last summer, collapsing from 1.40 to the U.S. Dollar to 1.18 recently. On the other hand, the Grexit scenario is becoming more plausible than ever, as Greece is going to the polls to elect a new government at the end of January. The weeks and months after the elections it will become clear whether the program from the Greek political party Syriza will be acceptable for the EU. If not, then the European Union, along with the currency, will be facing a very hard time. That will undoubtedly be reflected in Euro gold.

It is interesting to look at gold’s performance during the previous Euro crisis in 2011. The general opinion is that the Grexit scenario and quantitative easing by the European Central Bank (ECB) are a real possibility in the short run. The ECB was not involved in QE back in 2011, but still gold exploded higher during the sovereign debt crisis. The 2011 gold chart is below, and it shows two things.

First, gold was already in an uptrend and broke to all time highs in the heat of the Euro crisis in July-August 2011. Second, gold retraced as the Dollar rose from late August to late December. Strength in the Dollar ultimately weighed on gold. The Dollar Index was surprisingly flat from May to August and did not rise until September, which also marked reverse in gold. Gold had given up all its gains by yearend and the Dollar was finished the year strong. 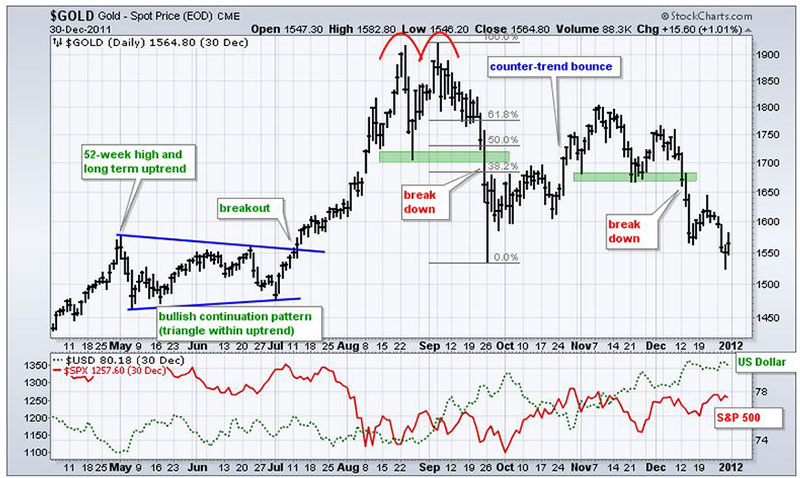 Now recent Dollar strength could weigh on the price of gold. Our opinion is that one should monitor multiple charts, gold in Dollar and Euro, as well as the U.S. Dollar and the Euro. By looking for logic chart patterns, one could get an idea of where gold is heading.