Where Is Silver Heading

There are several extremes in the silver market based on the data that we monitor. It is clear that a big move is underway. Which way? Let us review the most imporatnt data points.

Seasonal data shows that July and August are the strongest months of the year after January and February. We expect a rally during the summer months. 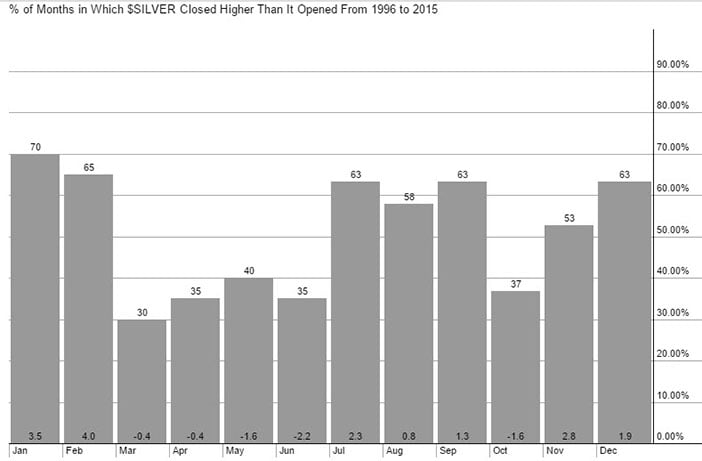 The daily chart indicates that silver is breaking out through a declining trend line that started last summer.

The weekly chart shows that silver is sitting exactly at the declining trend line that extends back to the peak in April 2011. These trend lines are quite important. The key questions are whether the breakout will be confirmed on the weekly chart, and whether it will hold.

Silver has declined 67% from its multi-decade top, which occurred in 2011. Since then the grey metal has been consolidating for 2 years. Market sentiment is neutral to bearish. These conditions suggest a rally and perhaps a new bull market.

Last summer the strong U.S. dollar capped a rally in precious metals. Because the dollar is consolidating its recent gains, we do not believe that precious metals prices will be suppressed this summer.

Last month the short positions in SLV, the largest silver ETF, decreased by a huge -38%. Currently there are 12.8 million shares of SLV short out of 332.9 million shares, one of the lowest in many years.

Interestingly, the SLV ETF holds 856 million ounces of physical silver, which is almost identical to the February 2013 amount before the silver price collapsed.

The COMEX Commitment of Traders report for positions at the close of trading on Tuesday May 19th showed that 19,706 short contracts were added by commercial traders. That is one of the largest changes in the history of COMEX silver. Open interest in that same week was 174,337 contracts, one of the highest in history. The only time when open interest in silver was higher was the first months of 2008.

Given the seasonally coming strong months, and the start of a breakout on the charts, we expect a rally in silver. However, given the large open interest in COMEX silver, a “false breakout” would invalidate that view. The pivot price is $16.50. Any sustained move above or below that price will determine the next short to intermediate cycle.