Silver: A Market Ready To Explode

The silver market is showing several multi-year (even multi-decade) extremes. A big move is underway, undoubtedly.

From a seasonality point of view, July and August are the strongest months of the year after January and February. Logically, a summer rally should be underway.

The long term silver chart indicates that a structural trendline is being tested currently. So we really are at a pivotal point.

The COMEX Commitment of Traders report for positions at the close of trading on Tuesday June 9th showed that 18,028 short contracts were covered by commercial traders, one of the largest increases in COMEX history. Three weeks before, the number of short contracts added by commercial traders were 19,706 which is also one of the largest changes ever in that market. The open interest currently stands at 189,524 contracts, the highest in history.

The rate of change in short positions by commercial traders, one of the key indicators we are monitoring, has moved aggressively from bearish to bullish in a matter of 3 weeks. There clearly is a lot of tension in the silver market, and the breakout or breakdown is going to be explosive. 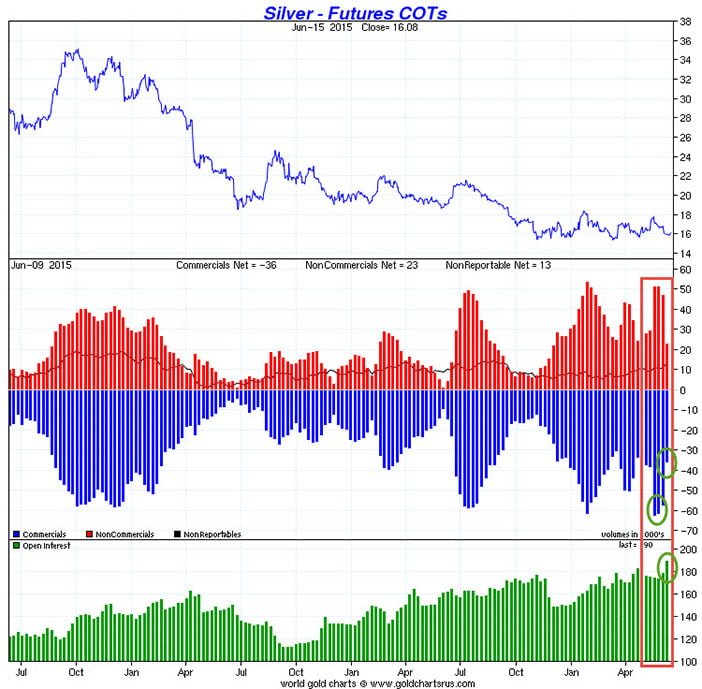 Clearly, something big is going on in silver. Silver is testing a critical trendline. Given the seasonally strong months of July and August, we expect a rally. However, given the large open interest in COMEX silver, a “false breakout” would invalidate that view. The pivot price is $16.50. Any sustained move above or below that price will determine the next cycle.

It is almost impossible to predict in which direction it will go. What we do know, however, is that it will be explosive.