What the Media will not Discuss about Gold

It has been one of the worst time periods for bullish investors of gold, with the metal down approximately 14-percent from its 52-week high after violating a series of both short- and long-term technical support lines, or price targets identified by traders as potential stabilization points. Nor has there been much comfort fundamentally as the U.S. Federal Reserve’s tapering of their bond buyback program and the resultant rise in strength of the dollar have conspired to place extraordinary pressure on the bullion market. Of course, the mainstream media has pounced on the latest developments, with virtually all articles and news segments calling for the painful death of the fabled gold bull run. While the bearish sentiment has its basis rooted in the immediate numbers, the contextual facts behind the recent setbacks have not been fully disclosed.

Most articles covering gold, whether for or against its investment, will specifically focus on the price charts along with a litany of interpretations and possible trajectory implications. Such analyses, especially those that incorporate Elliot Wave Principles, can obfuscate the realities of the precious metals market. Since this sector is naturally embedded with high emotions, a better approach is to look at absolute, irrefutable facts. 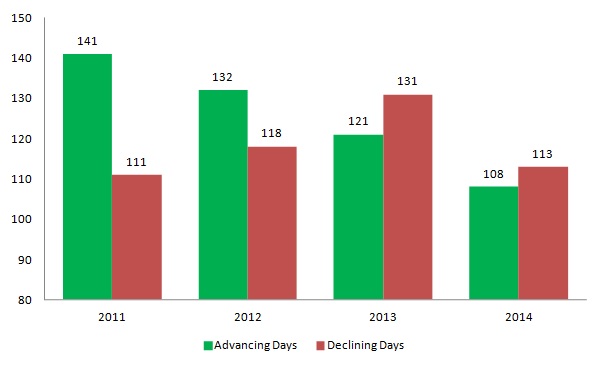 Looking this year’s available data from the GLD, the most popular “paper” fund that tracks the movement of the physical bullion market, there are currently 108 advancing days (days where the GLD moved up over the prior day) against 113 declining days (days where the GLD moved down from the prior day). Assuming the mathematical trend for this year continues until December 31st, we will end with 123 advancing days against 129 declining days.

Mainstream financial articles will note that should the above event play out, it will be the first recorded back-to-back annual losses since the 1997. However, that relatively meaningless statistic doesn’t take into account the declining effectiveness of the declines. In other words, while gold’s nominal price continues to be attacked in the marketplace, the bearish traders’ abilities to negatively impact the market has actually weakened.

Since 2011, the annual amount of advancing days in the GLD has steadily declined from a high of 141 to a low of 121 in 2013. That year was also the time when declining days jumped to 131, a statistically aberrant number considering that the declining totals for 2011 and 2012 were 111 and 118, respectively. This suggests that the loss of valuation in gold was due more to weak-hands leaving the market in search of greener pastures, considering the failure of the precious metals complex to build upon 2011’s parabolic highs. 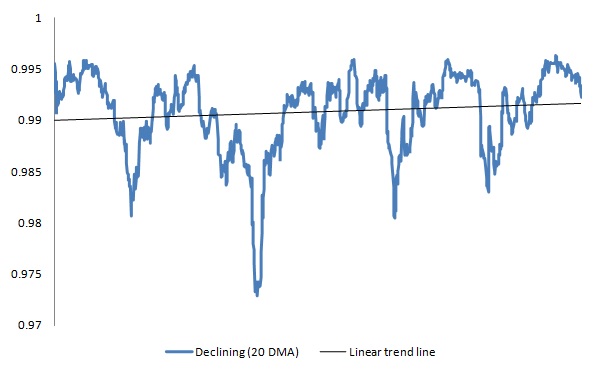 This is further evidenced when we look at the declining days’ percentage losses using a 20-unit moving average. Since the crash of 2008, the bullion market has not hit a singular low that has come close to replicating the volatility of that fateful day. In fact, bearish momentum is actually eroding, as evidenced by the linear trend line drawn against the declining day’s average percentage losses. While this does not necessarily signal a bottom in the gold price, nor does it guarantee that a rally is imminent, it does tell us of possible exhaustion in selling momentum.

As students of market history are aware, enormous pressure is built up when short-traders no longer believe their position offers favorable risk-reward trade-offs. Typically in such cases, a move to the upside is likely as the shorts move to cover their positions to avoid a painful whiplash. Given the current facts of the gold market, calling its end may be too premature.