We asked this question to gold analyst Ronald-Peter Stoeferle, Managing Partner and fund manager at Incrementum AG in Liechtenstein, author of the well known In Gold We Trust reports. In this article, we describe Stoeferle’s expectations.

Gold in all major currencies worldwide was a rather stable asset class in 2014. The first chart shows that the pessimism around gold is not justified. Dollar gold is slightly lower year-on-year, but gold in all other currencies is between 3% and 13% higher on the year. 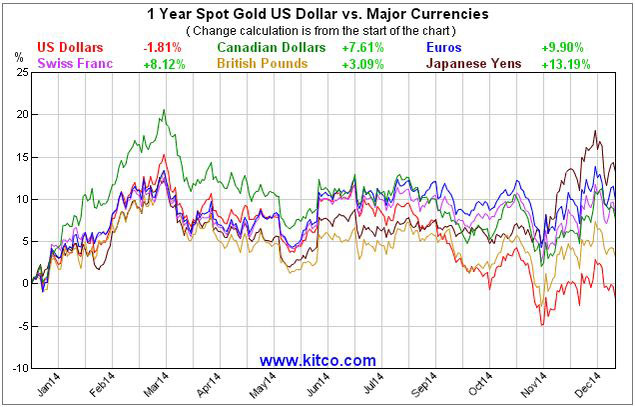 On the other hand, silver and precious metals miners went lower and broke below their trading range. That is clearly disinflationary, and disfinlation has been the main message that the precious metals complex has signaled in the past year.

Ronald Stoeferle’s outlook for gold in 2015 is based on a continuation of those trends. It would not be realistic to expect a major move higher in the first half of 2015. Why? Because the current monetary and economic environment, characterized by a rise in negative real rates and a weakening of inflation momentum, is not very gold friendly.

The next chart, displaying both real rates and the gold price, learns that the level of interest rates has mostly determined the steepness of the gold price change. Notice on the chart how real rates are currently in negative territory which suggests that the secular bull market is not over yet. Gold’s correction since its 2011 peak has simply reflected a lower level of real interest rate change. 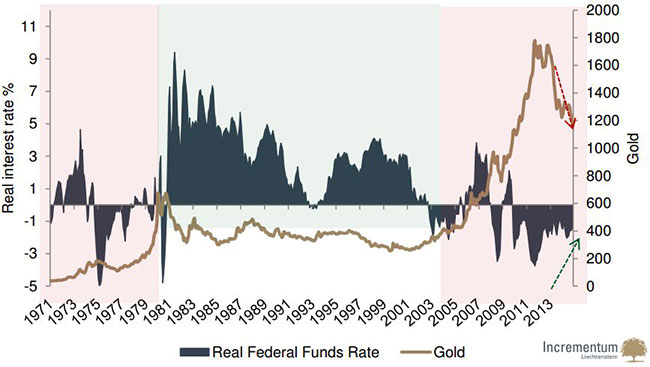 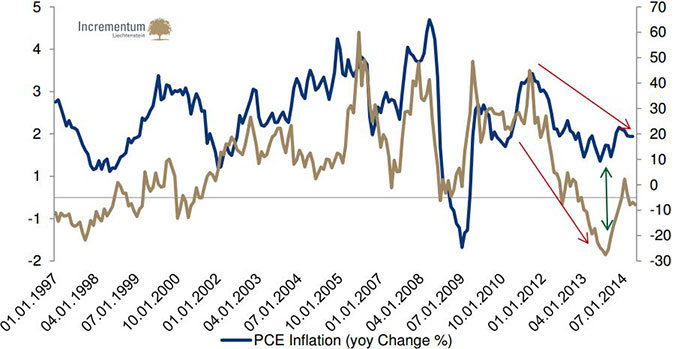 In order to track the rate of inflation / deflation, Ronald Stoeferle developed its proprietary Incrementum Inflation Signal. The indicator currently has a low reading, comparable to early 2014, suggesting that the first period of 2015 should not be very gold friendly.

Central planners in the U.S. and Europe have embarked upon monetary disinflation in 2014. In other words, they have reduced the speed at which Dollars and Euros have been created. The real economy has not shown meaningful acceleration, however. It is fair to expect that monetary inflation will return. That is a key fundamental driver for gold’s prospects in 2015 and beyond.

Monetary policy will undoubtedly be the key driver for markets, money and metals in the years ahead. Stoeferle’s fundamental belief is that we will experience unintended consequences of these monetary interventions resulting in increased volatility. Although nobody can predict the exact timing of this, it is realistic to expect this somewhere in 2015.

Assuming a continuation of the disinflationary trend and lack of real economic growth, a very realistic scenario in 2015, it would trigger central banks to launch one or more monetary measures, including:

Those measures are likely to result in monetary inflation and falling real rates, a very gold friendly set of circumstances.

Given the above trends and data points, Ronald Stoeferle feels that gold is setting in a long term bottom. Although gold could go lower in the short run, it seems unlikely that another price crash similar to the one in the first half of 2013 is about to repeat. That is clearly a contrarian call compared to the expectations of “pundits” in the mainstream media.