Why Volatility Is Good For Gold

For almost 3 years, volatility was at the lowest level in many decades. But that has changed since July of this year. The mini-flash crash in August was quite exciting, but a much more serious event took place in September, and it remained under the rader. We are talking about an intervention by the Fed in repo market, one of epic proportions.

The Fed intervenes in the repo market in order to ‘balance’ liquidity in the banking sector with the Fed Funds rate. In a repo operation, the Fed buys Treasuries from a back, and pays with cash, leaving the bank with cash on the balance and ‘less qualitative’ collateral. In a reverse repo operation, the opposite happens, leaving the bank with ‘qualitative’ assets on their balance sheet, i.e. Treasuries.

Investment Research Dynamics discovered an incredible spike in reverse repo’s in September. This is what they wrote last week:

“What’s interesting is that the spike-up in reverse repos occurred at the same time – September 16 – that the stock market embarked on an 8-day cliff dive, with the S&P 500 falling 6% in that time period.  You’ll note that this is around the same time that a crash in Glencore stock and bonds began.   It has been suggested by analysts that a default on Glencore credit derivatives either by Glencore or by financial entities using derivatives to bet against that event would be analogous to the “Lehman moment” that triggered the 2008 collapse.”

We know that the financial system was ready to collapse in 2008, but if you compare that with the intervention of last month, you can simply conclude that the latter was of of epic proportions. 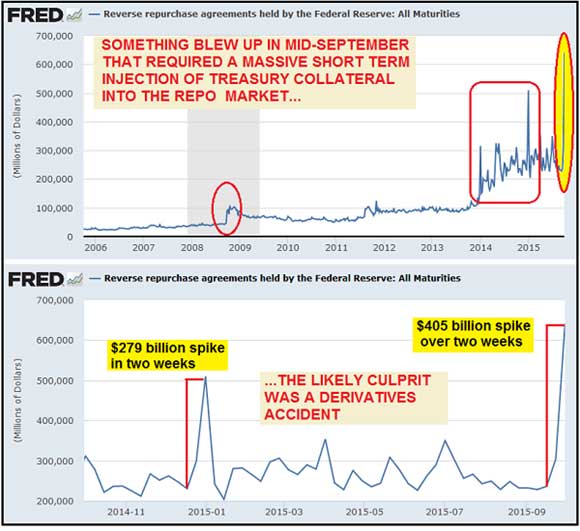 Note on the chart that the number of interventions taking place is significantly increasing, and the liquidity involved is truly exploding.

In the midst of rising market volatility, we see gold outperforming stocks currently. Gold has put a bottom on July 27th, and has been rising since then. The precious metals complex is ready to break out of a 3-year descending trendline, which would result in a huge breakout would that occur.

Meantime, we see an increasing number of bullish signs in the gold market. The next chart, courtesy of Sharelynx, shows gold volatility (red line in the upper pane) vs the gold price (blue line). Note that a spike in gold volatility always comes with a (temporary) bottom, as indicated with the orange rectangles (our annotation). 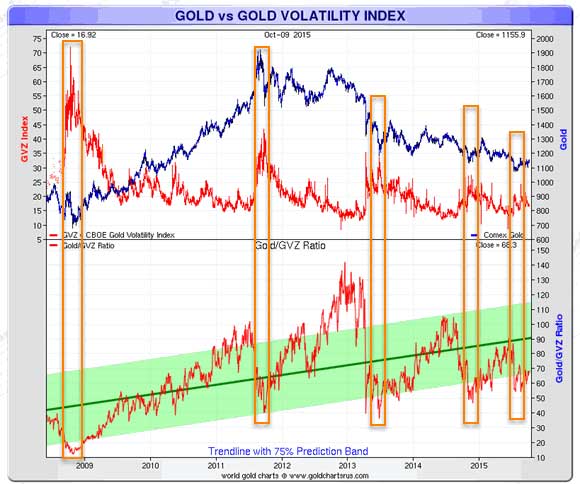 This is another sign that gold is able to rally in the short term, which, if that occurs, will take out the declining trendline, and result in THE breakout.