This article was written for Miles Franklin by Gary Christenson.

WHAT IF WE EXAMINE PRICES IN TERMS OF SILVER? 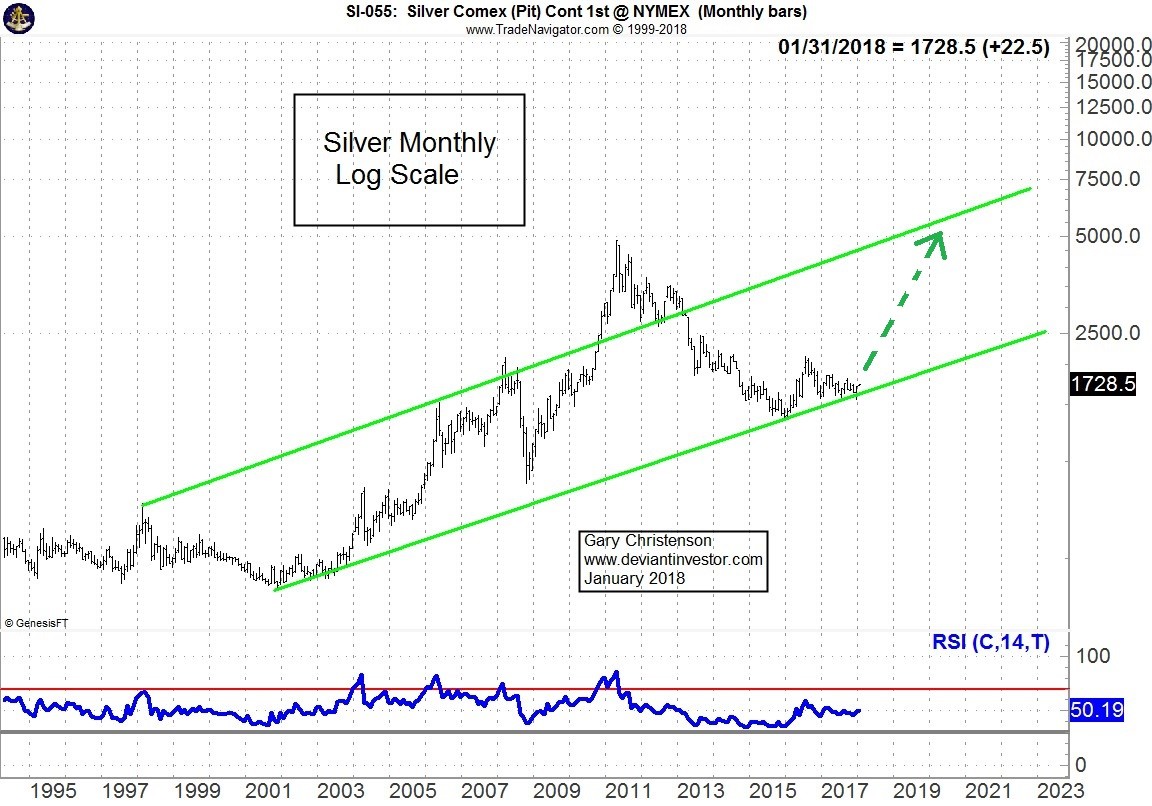 Crude oil is the world’s most important commodity. It takes three to four ounces of silver, at current prices, to purchase a barrel of crude oil. That has changed little in 35 years. 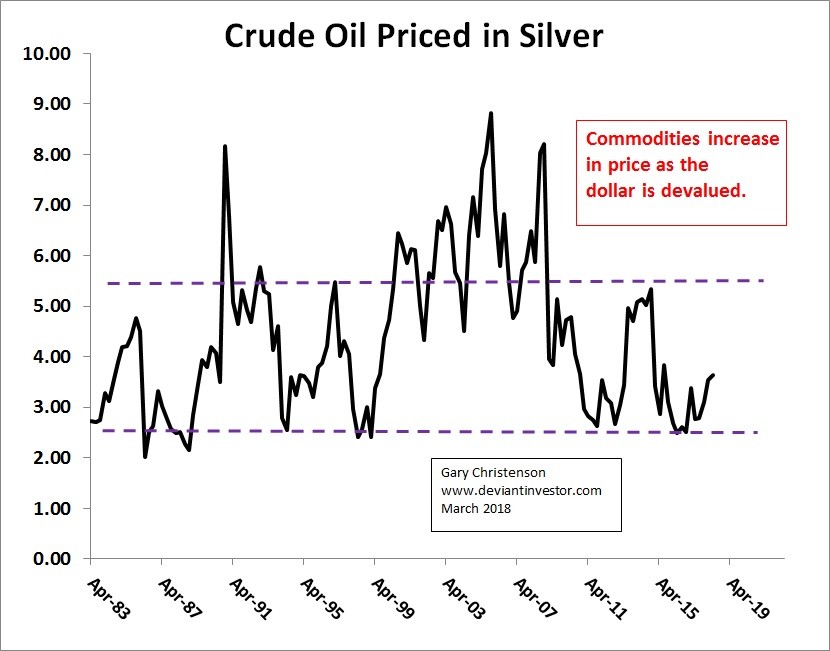 Crude oil and silver prices rise and fall, but silver’s purchasing power for crude oil has been flat for 35 years. As the dollar devalues, silver and crude prices increase.

Houses are a wasting commodity. We must maintain houses or else their value plummets. Regardless, nominal house prices rise because the dollar devalues. In terms of silver, house prices have been relatively flat for thirty years, excluding the obvious bubble in house prices in 2003 – 2007. 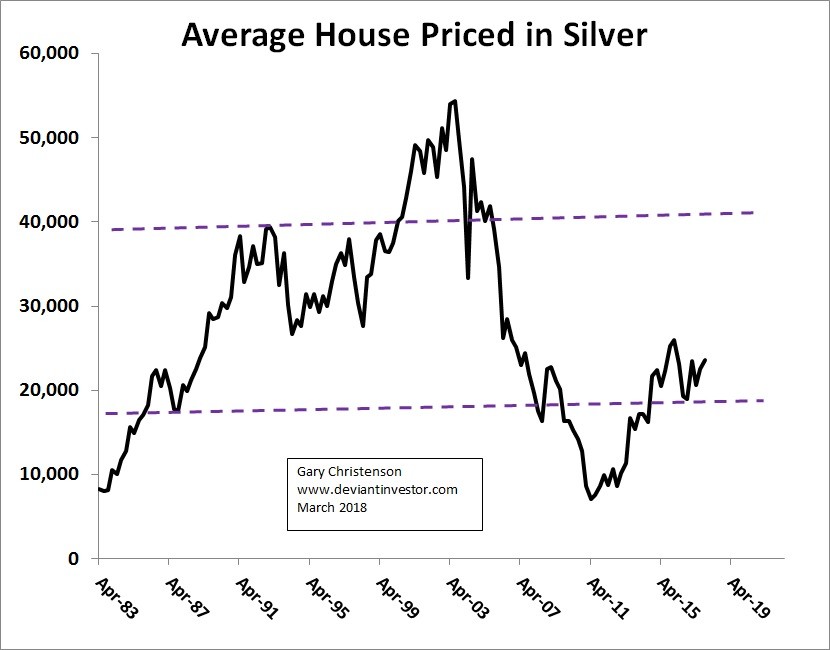 The St. Louis Federal Reserve reports average hourly wages. Average wages rise, but less rapidly than debt, government expenditures, the S&P 500 Index, and currency in circulation (M3). This benefits the political and financial elite and hurts the middle and poorer classes. However, the middle class and poorer class don’t own congresspersons or lobbyists, so this imbalance toward paper financial assets is not surprising. 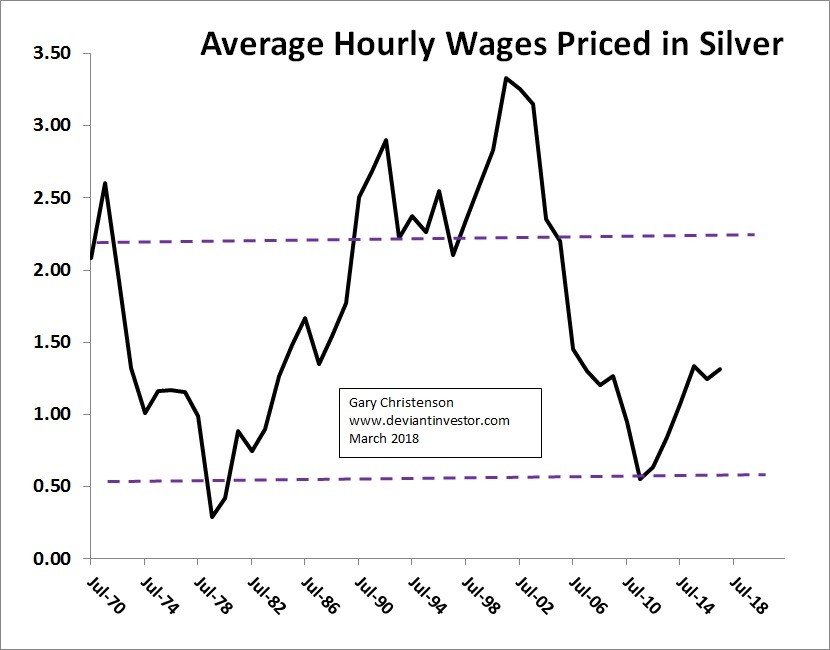 Commodity prices, house prices, and wages rise as bankers devalue the dollar. However, in terms of the purchasing power of silver, they have been flat for many decades, unlike debt and paper assets.

WHAT ABOUT DEBT AND PAPER ASSETS?

U.S. National debt approaches $21 trillion. Unfunded liabilities are five to ten times higher. The debt bomb will explode but it is difficult to find anyone in government that cares. For perspective:

Assume the impossible and pretend official national debt will increase at 8.8 % per year going forward. Due to tax cuts, military spending, baby-boomer retirements, Medicare expenses, and more it will probably accelerate. Regardless:

In 2024 the national debt is targeting $34 trillion

In 2030 the national debt is targeting $57 trillion

Exponential increases in debt, population, commodity production, pollution, and economic craziness cannot persist in a finite world. There will be a reset. The damage will be considerable unless we prepare with gold and silver assets. 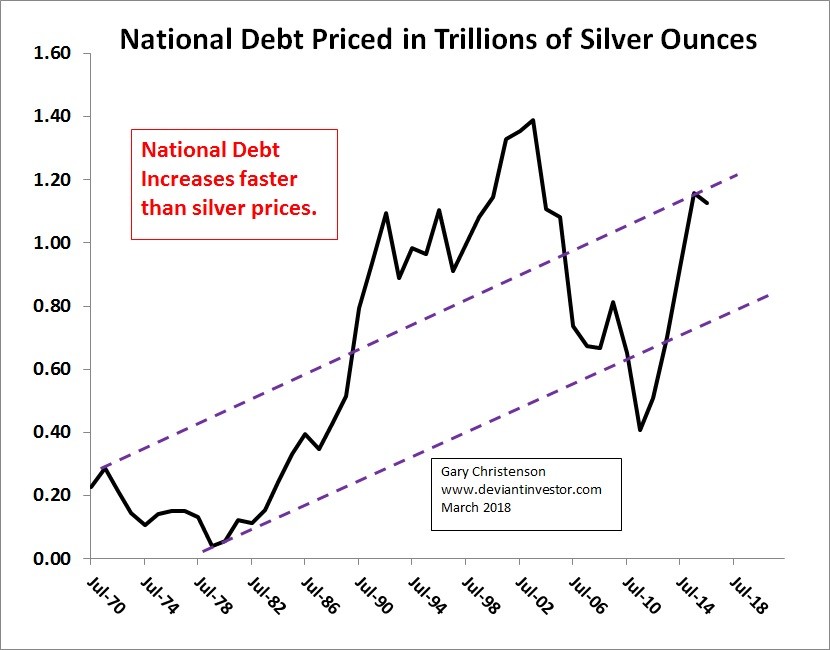 Excessive government spending is the primary reason national debt increases. Spending beyond income leads to tragedy, which takes longer for a government that controls the currency units, when compared to an individual. 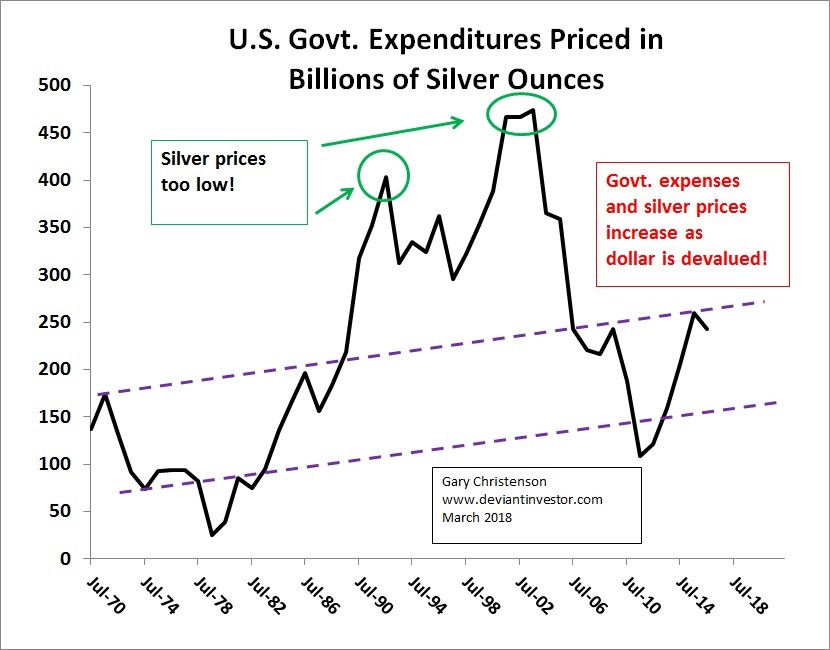 Social programs develop a life of their own. One example is the SNAP (food stamps) program. This program spends over $70 billion per year, or about one-third the current value of (supposed) Fort Knox gold each year.

Hmmmmmmm! Conclusion: Gold is under-valued and the U.S. government spends too much on SNAP. Expect a reset!

Examine the cost of SNAP when priced in silver. How long will silver and gold remain undervalued as uncontrolled spending blasts total debt into uncharted territory? 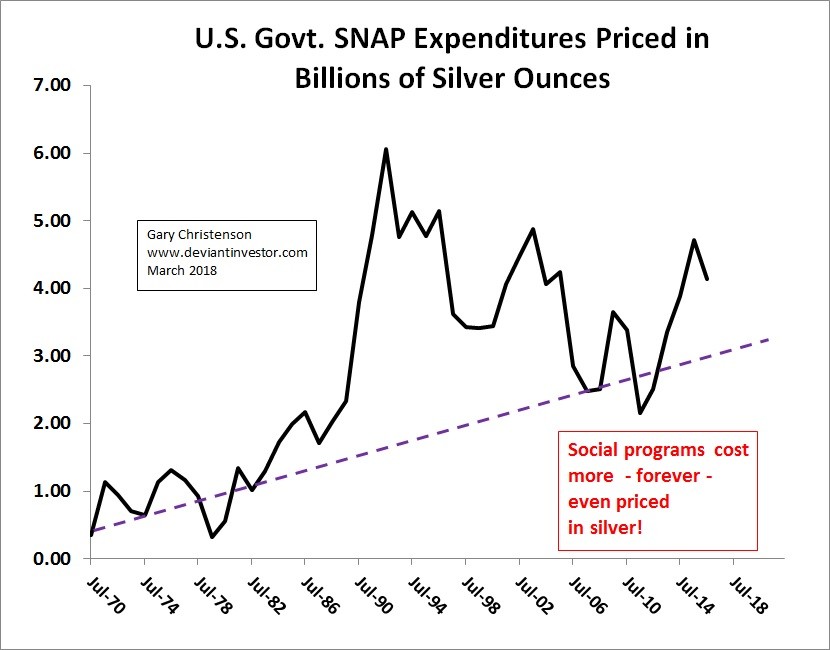 As dollars devalue the S&P 500 Index rises. As economic confidence, earnings, High-Frequency-Trading, central bank “printing” and media hype increase, so does the S&P 500 Index. Occasionally stocks “bubble” higher, as in 1987, 2000, 2008 and 2018. They inevitably correct. When priced in silver the index slowly increases. 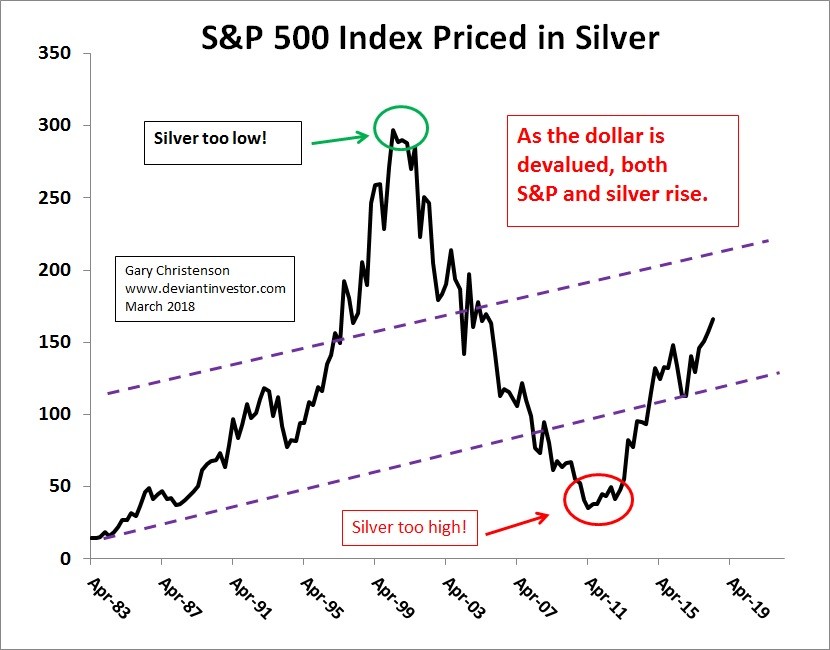 Paper assets, government spending and debt – unlike commodities and wages – increase more rapidly than silver prices. This benefits the political and financial elite who own more congresspersons and lobbyists than the poor.

Silver is one of the most under-valued assets in the world. Silver prices may not reset higher next week but silver prices will continue their exponential trend upward and rise far higher—unless the United States returns to sound money, honest accounting and eliminates the central bank.

One should purchase silver. I suggest Miles Franklin or WhyNotGold.

I write from a finite world filled with delusional people who believe in ever-increasing debt and unbacked fiat currency units. However, I trust silver.