The Real Reason Gold Shares Are Down Big

Junior Gold ETF is Creating a “Blood in the Streets” Moment

A Chain Reaction is Creating the Last Great Gold Stock Buying Opportunity of the Decade!

Dear Reader,I want you to take a close, hard look at this chart. 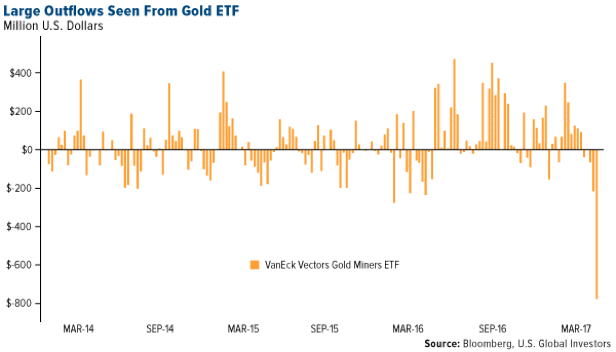 The GDXJ is the ETF that has become one of the world’s most popular investment vehicles for gold investors over the last decade.The idea behind ETFs is luring many investors by allowing you to buy and sell broad baskets of stocks with a single trade.

It’s a one-click way to buy a basket of small-cap gold exploration, development, and production companies, and from January 2010 to May 2017, the market capitalization of the GDXJ grew by 480%.

Since it became so popular, a technical challenge has emerged: by definition, junior gold stocks don’t have large market caps and their shares don’t have tremendous trading liquidity. The GDXJ grew in popularity so much that it had too much cash and not enough places to put it.

Here’s where this becomes interesting. I know many precious metal investors who are hurting big time right now because they missed the phenomenal move between January and August of 2016 and have been seeing nothing but a massacre ever since.

My gut and the research I’ve put together suggests that we are about to undergo a frenzy sell-off, something that will cause some gold investors (who have too much of their net worth weighting in gold-related stocks) to feel like puking, but for those who prepare, I am telling you that this is your “Bitcoin at $3” moment. 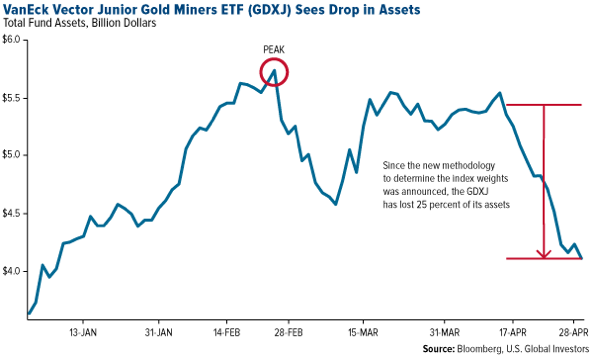 The sell-off has already begun, and it’s due to no fundamental reason at all – it is a “forced selling” based on technical issues.Many junior gold stocks are Canadian. As soon as an entity owns more than 20% of a Canadian-listed company, regulations restrict its trading ability and make holding the position a bureaucratic mess.

Because the ETF got so popular and the small-cap miners are truly a tightly knit group of companies that are not collectively worth that much, the ETF couldn’t find ways to deploy cash. As a result, it is now having to rebalance its components.

This rebalancing is already underway, with hedge funds, short-selling funds, and retail investors all looking for a way to either make a killing due to this selling avalanche or protect their holdings from further declines.

The rebalancing is set for June 16th.

Between now and then, expect significant volatility in all the sub-$1B market cap junior and mid-tier gold companies. Shares of companies will be sold by the GDXJ so the new ETF can become a “large mid-tier to small major” gold ETF.

The Chain Reaction:
Margin of Safety Will Be at All-Time High

Margin of Safety is the most important term in finance, according to Warren Buffett and his mentor, Benjamin Graham. Essentially, the idea is that no investment — and certainly no trade — are bulletproof, therefore the cheaper you can buy it, the better.

It goes deeper than that: a more effective use of Margin of Safety is contrarianism.

This means that you’re buying when assets are out of favor (and therefore cheap), with the certainty that demand will be increasing later.

But the most effective use of Margin of Safety is buying so cheap that the company actually trades at or below its liquidation value.

The GDXJ is going to dump close to $4B worth of junior mining shares – that’s a massive amount.

We all know how the market reinforces our most innate emotions, and as this forced regulatory selling commences, panic selling will ensue.

Gold stock investors have been hitting stop losses and dumping shares, which is creating even more selling.

What may be in the cards here is a self-reinforcing cycle of forced, ignorant selling that will feed on itself and cause a panic in some of the world’s best small-cap gold stocks. It could be a chain reaction, and again, this is coming on June 16th, right when the FED next announces an interest rate decision.

We are currently reviewing all the companies that the GDXJ will be forced to sell. I can already tell you that I have personally taken profits on a number of dividend-paying stocks and liquidated a real estate holding in order to be cashed-up.

The reason I did this is because at the bottom, after some companies’ stock prices basically go back in time to levels lower than 2015’s historical lows, guys like my partners and I — or funds like Marin Katusa’s, Sprott Asset Management, and Peter Schiff’s Euro Pacific — and other smart investors in the space will be making very aggressive moves into the sector. Gold is not in a bubble, nor has it displayed any “bubble-like” golf stick-shaped chart.At the moment, a total of 52 companies are estimated to be under excessive liquidation by the GDXJ, and we’re preparing for this as we speak.

You need to make a decision – one that will define you regarding gold stocks from here on out. You need to be absolutely sure that you can stomach high volatility, which will test every fiber of your being, because buying when Margin of Safety is at an all-time high is not as easy as it sounds. It requires nerves of steel, and most of all, it entails forgetting all about the pain you endured (if you endured any) by mismanaging positions in the past or getting the timing wrong.

There’s no escaping this – it will get bloody before we get our chance to create dynasty money.

Now is the absolute ideal time to learn exactly how industry insiders are finding the best values.