Talking Numbers, a popular financial news segment hosted by CNBC’s Brian Sullivan, recently interviewed Larry McDonald, an author and senior director of Newedge, to discuss the latest volatile conditions affecting the U.S. equities sector. McDonald is seemingly comfortable playing the role of the contrarian, having warned the general investing public about big banking’s financial excesses. This time, however, he is moving against the grain in the opposite direction, citing bullish reasons to stay true to the markets at a time when fear and guttural instincts are driving investors dead-center for the exits. Has the correction finally abated, or has McDonald and the contrarians picked the wrong time to charge a tsunami?

During the Talking Numbers dialogue, McDonald cited three reasons he believes indicate a potential market bottom. First, the Federal Reserve may be incentivized to re-expand the scope of quantitative easing, with the St. Louis branch president James Bullard offering uncharacteristically dovish comments in a recent interview, stating that the Fed should consider extending its massive bond buying program beyond its expiration next month. Second, McDonald believes in an energy rebound, which according to his research, short-term bearish activity following a sustained bull market usually begets another market rally. Finally, the Newedge director addressed the technical charts, noting that the (rarely used) 400 day moving average has been a “key inflection point,” with the bulls and bears using that pivot as a delineation marker.

Unfortunately for most viewers, the expressed research of McDonald fails to provide much confidence towards the potential of a resurgent bear market. First of all, the Federal Reserve, like any other central bank, can only do so much: macro-economic conditions can rarely be manipulated long-term by fiscal policy, as evidenced by the disappointingly slow inflation trend for the Japanese Yen, despite its issuing bank’s prodigious efforts. Relying solely on the Fed to maintain a “paper” bull market is a recipe for a speculation bazaar. Neither is an energy rebound likely to occur simply on the basis that what has occurred in the past will repeat itself in the future. Unlike other financial assets, energy is a commodity, and while trading activity can impact its valuation trajectory, it is also prone to its underlying supply and demand dynamics. Currently, a shift towards increasing domestic production combined with ever-fuel efficient vehicles are pressuring supply like no other time in near-term market history.

The point of interest from McDonald’s argument is the technical trend that, as of now, anchors itself on the 400 day moving average. Moving averages are simply mathematical lagging indicators, graphically displaying a general trajectory of an asset’s price action over a specified range. A similar and perhaps less confusing alternative is plotting the linear trend line over a given time period. 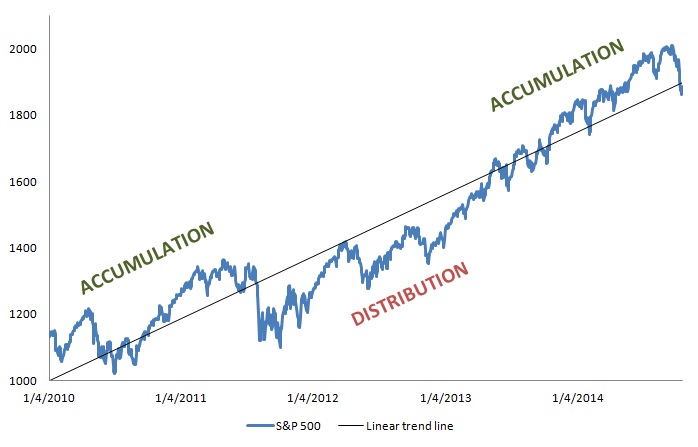 In the case of the broad markets, the linear trend line of the S&P 500 index between 2010 until now (Oct. 17, 2014) clearly separates cycles of accumulation (buying) and distribution (selling). It may be of significance that the current price point is below the trend line, and was pushed there violently over a short period of time. With nearly a year of virtually uncontested bullish trading, the natural rhythms of the market is pointing towards a full (read long) correction.

To gamble otherwise is to ignore both established chart patterns and the shaky fundamentals that uphold our misguided faith.