Culminating with the cold — but well-deserved — execution of a major character, the fifth season of The Walking Dead stunned audiences and left them clamoring for more. The producer of the popular post-apocalyptic zombie program, AMC Networks Inc. (NASDAQ:AMCX), will be hoping for a similar response by investors when its earnings report is released on May 4. Given strong trends in financial performance in the past, AMC is expected to do well, but can its stock still provide room for growth?

If prior narrative is any indication, AMC stands on envious ground. According to a posting from Zacks Equity Research, “This company has seen a nice streak of beating earnings estimates, especially when looking at the previous two reports. In fact, in these reports, AMCX has beaten estimates by at least 10% in both cases, suggesting it has a nice short-term history of crushing expectations.” Furthermore, analysts’ forecast adjustments prior to the upcoming earnings report point towards a rising level of bullish sentiment. Finally, AMCX stock carries a “strong buy” rating from Zacks, the highest rank that the investment research company provides.

Within the market itself, AMCX offers even higher odds from a statistical or quantifiable basis. Despite choppy trading conditions over the past five weeks, AMCX’s average performance is still in the black at 0.44%. Historically, such cumulative figures — though admittedly ho-hum — have resulted in a 75% probability that shares will move higher overall within the next five week period. Average returns are 5.5%, whereas average losses are 3.1%, giving a reward-to-risk ratio of 1.77:1. In other words, the magnitude of profit potential is nearly twice as high as the equivalent magnitude of risk.

On paper, AMCX appears to be a no-brainer investment. However, technical analysis does counter enthusiasm with notable warnings. First, technical gauges such as the Relative Strength Indicator (RSI) and the Moving Average Convergence-Divergence (MAC-D), which are algebraic tools that record cumulative market performance trends across variable criteria, suggest declining investor sentiment after shares failed to overcome a resistance ceiling at $78. Incidentally, this was the same resistance that failed the bulls back in early 2014, leading to a 30% drop in valuation. 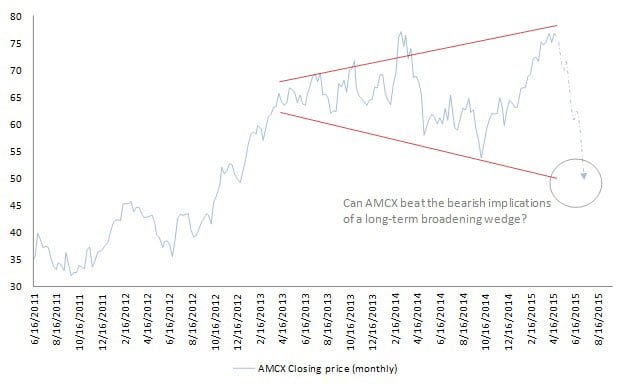 The greater implication is especially worrying when incorporating Elliot Wave Theory into the mix. Under the technical discipline, Elliot Waves is the study of recurring chart patterns that forecast future bullish or bearish price swings. In this particular case, AMCX is forming a long-term broadening wedge pattern, which hints at entropic market dynamics. Also known as a “megaphone pattern” in various Harry Dent publications, it describes a condition where a stock bounces up and down resistance barriers that are branching out over widening angles. As shares depart from the origination point, the angles of the pattern creates large swings in price, making market timing an especially critical skill.

While bullish factors both fundamental and statistical outnumber the technical arguments, the sheer weight of the broadening wedge pattern — and its enormously bearish forecast — necessitates investor respect. For those considering adding AMCX into their portfolio, watch the $78 resistance. Failure to rise above it would be extremely worrying given the technical context.