Ammunition as an Investment: Olin Corporation

As we head into the middle of 2015, one controversy continues to dog the United States: gun-related violence. Though thankfully, we have yet to witness a tragedy as horrifyingly steep in magnitude as the Sandy Hook incident, the broad issue of the Second Amendment has taken on racial and political overtones. And like it or not, such fundamental drivers almost always has an impact on Wall Street.

In previous years, the outcries in response to gun violence has typically been to attack the firearms manufacturers directly. The basic summation of the argument is that had a gun company not been allowed to produce certain types of guns — most notably the much-maligned AR-15 “black rifle” — then the people affected by the sad results of their products would still be either uninjured or alive.

It’s a thorny debate, certainly. While the mainstream media focuses on the unnecessary loss of life due to deranged maniacs wielding firearms, there is less attention paid to the number of lives saved by the very same firearms. But what’s interesting is that the general public has tunnel vision on the instrument, as opposed to the projectile that actualizes it.

Ammunition is the biggest factor in the gun debate. Without it, guns are essentially steel paperweights. Control the ammo, control the guns: it’s really that simple. So it stands to reason that investing in munitions factories would be a no-brainer investment. Unfortunately, this is where things take a complicated turn.

One of the few ways investors can actually invest in ammo — aside from storing it in a secret silo ala Alex Jones — is to buy shares of Olin Corp. (NYSE:OLN), which owns popular munitions-brand Winchester. However, it’s not a direct play. Olin is primarily a chemical production facility and Winchester is just a part of their overall business allocation.

Because of this diversification, there are many elements that can affect their technical trajectory in the markets. While shortage supply has been a major concern amongst Second Amendment advocates — thanks to a huge ramp up in ammo orders from the Department of Homeland Security — other fundamental concerns by non-firearms related issues have as much leverage, if not more, on Olin stock. 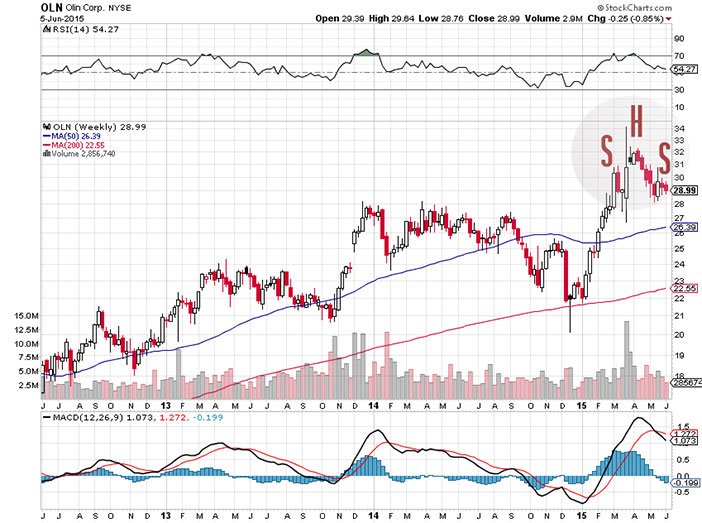 On a weekly chart of Olin, shares appear to be forming a bearish head-and-shoulders pattern. As the current price action wanders about in a consolidation phase, the likelihood that it would sharply correct grows worryingly. Ultimately, there’s a downside risk to between $22 and $24.

However, Olin is still a great company and there’s plenty of potential. It’s just that the near-term projections are not very stable.