Apple Can Do No Wrong

Such is the enigmatic power and charisma of Steve Jobs, whose vision alone commandeered one of the great paradigm shifts in consumer retail history. Just as Sony was once synonymous with portable audio technology for Generation X (anyone remember the Walkman?), the younger Millennials have largely self-identified with Apple’s ground-breaking and unabashedly quirky product line, and for good reason. No company quite captures the intuitiveness and visual clarity of their smartphones, tablets, and personal computers. While many try, the competition invariably falls short due to the derivative nature of their efforts. Several companies sell tablets. Only one sells the iPad.

But perhaps some trouble is brewing in the fantasy world that is 1 Infinite Loop, Cupertino, California. Apple’s product line is fairly predictable for anyone that has the most minimalist of arithmetic abilities, and their vaunted press releases, an oddity in and of itself due to their eschewing the world-famous Consumer Electronics Show, are beginning to show signs of lassitude. Their newly minted offerings still generate enormous fervor amongst the Apple faithful; however, the products are no longer sacrosanct, with several companies regardless of stature gleefully taking aim towards any vulnerabilities, as was most recently demonstrated by the so-called “Bend-gate.”

So far, Apple (NASD: AAPL) has managed to remain largely unscathed from recent volatility that has downgraded the broader equities market, with its stock trading close to all-time highs on an adjusted basis. But this condition is far from guaranteed, as the last time the stock peaked was on September 2nd of this year, with a closing price of $103.30. Since then, Apple shares have met overhead resistance, touching the peak on an intra-day basis but failing to close above it. 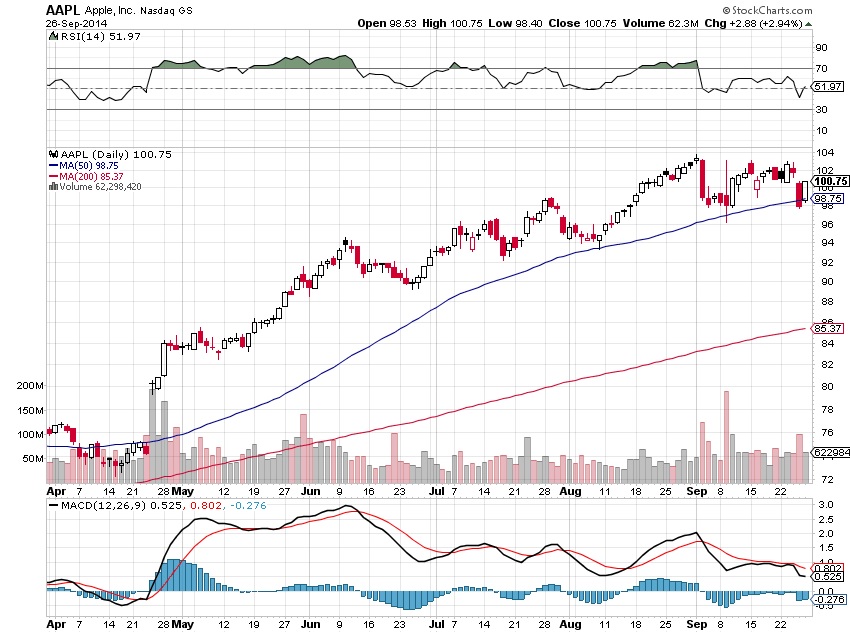 By itself, such failures does not constitute the necessity for fear: all publicly traded assets go through cycles of bullish and bearish sentiment. The one point of concern is that the volatility experienced between September 2nd through the 24th did not breach AAPL’s 50 day moving average. On the 25th, it did. The nearly four-percent loss of valuation on that day could be explained by broader fears towards the potential of foreign assets held on Russian soil being nationalized by the Putin-led regime. At the same time, what does Russia have to do with Apple?

According to the technical charts, not that much. The sell-off on September 3rd was far more severe, and the next significant bearish trade occurred on substantially heavier volume. Macro-fundamentals that negatively affect the broader indices will typically drag down a majority of the individual names that make up its numbers, yet the recent bearishness towards Apple suggests that something deeper is catalyzing the dumping. 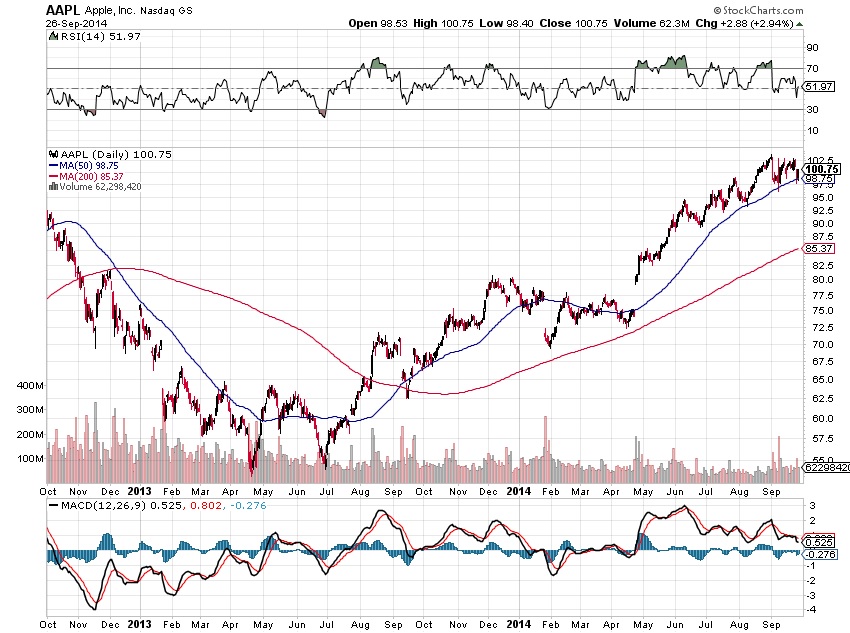 Looking at a two year chart, it’s pretty clear that momentum has been bleeding off for AAPL. The tell-tale signs are established by looking at the Relative Strength Indicator (RSI) and the Moving Average Convergence-Divergence (MAC-D). Both indicators are trending negative, charting a series of lower highs and lower lows, while the price action itself has continued to move up. Typically, a misalignment between the price and its historical performance suggest a changing of sentiment. In the case of Apple, its failure to establish a strong support line at its new lofty levels is an indication that further selling pressure may commence. If that is the case, the stock could eventually find itself at its present 200 day moving average, which stands at $85.20. Such a bearish downturn may take a few months but it would not be out of the ordinary.

All in all, Apple has done an admirable job of pumping out great products and maintaining its proprietary edge over its competition. However, the competition never rests and their efforts in closing the gap might just be reflecting itself in Apple’s valuation.