How Bad Is The Crude Oil Meltdown? Very

Crude oil futures contracts were the toast of Wall Street when it sprang up at the start of trading last week, shocking market bears with an 8% leap — capping off a three-day winning streak that added nearly 21% of valuation in the international benchmark Brent Crude index. Fundamentally, the rise was attributed to localized supply constraint issues as well as a negative revision on U.S. oil production rates. So big was the impact that a similar winning streak has not been seen for 25 years.

Unfortunately for the “knife-catching” speculators, the party came to an abrupt end. On September 1, the spot-price of oil dropped 8.4%, almost halving the gains made in the three-day rally. While the oil markets did churn a little bit, the Brent Crude index ended last week at $49.29 a barrel, which places it at a respectable 13% above the August 26 session but nowhere close in making up for the year-to-date loss of nearly -21%.

Adding more salt to the wound is the probability that there is more risk in the oil markets than there are rewards. Yes, the broad market correction in the Dow Jones Industrial Average certainly plays a hand in the bearishness towards commodities and the energy sector — no one is really in the mood to take a gamble in the recently turned volatile financial markets. But the greater issue is that there is simply no demand to accelerate the pricing complex for oil.

The mixed jobs report for August from the Department of Labor is a testament to the demand problem. While unemployment continues to hit multi-year lows, the economy added less jobs than expected. We already know that the bulk of the so-called recovery has been buoyed by “Wal-mart jobs” — hence, the rapid fall of technical unemployment rates. But if bringing in minimum-wage, or part-time seasonal jobs is so laborious for the economy, imagine how bad things really must be! 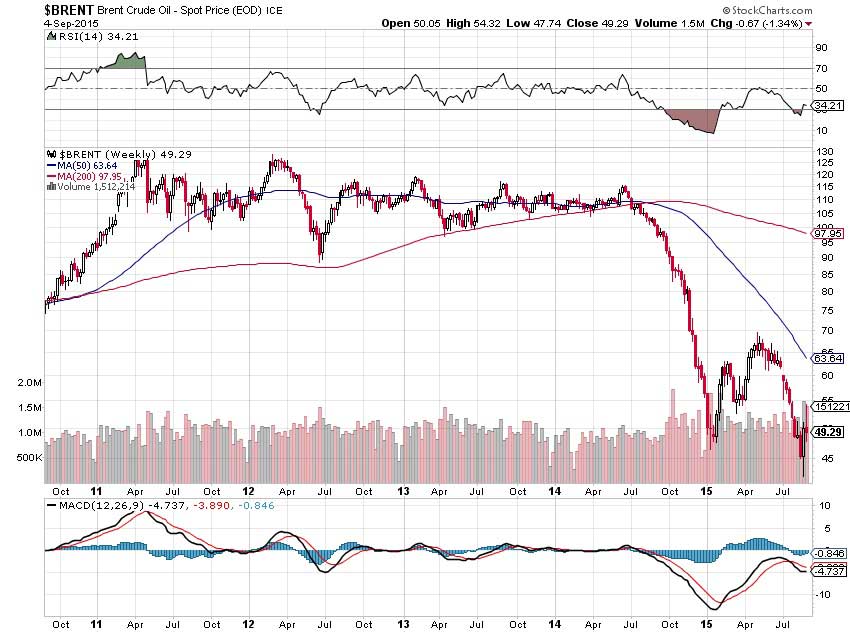 The technical charts certainly hold no punches. Brent Crude’s “rally” last week has only succeeded in bringing the spot-price to a very unstable support level. It’s unstable simply because there is no established trading pattern at that price point for several years. Should speculators fail to press the oil price higher, there is a very big risk that the bears will take control of the market, essentially driving it into the ground.

It may look like crude oil is trading at a discount, but such prognostications are of course dependent upon future price trajectory. For the oil markets, there is more than enough evidence to suggest that the worst is yet to come.