Should You Believe in the One Day Market Rally?

The financial markets are off to a rip-roaring start — or so Wall Street insiders would have you believe. Last Friday’s robust leap forward in which the benchmark S&P 500 gained 2% against the prior session was the signal equity bulls were waiting for. Because the markets were thrashed over the course of the previous five days, any hint of bearishness ahead of the long holiday weekend would have driven the nail in the coffin. But is this latest move something investors should buy with their hard-earned money?

I would have to argue no. In fact, I would have to argue hell no! Before the final trade of last week, the mainstream media was flooding airwaves with stories of impending doom and geopolitical calamity. Now, it turns out that a singular buying flurry could change the entire foundation — who knew?

Sorry folks, this isn’t Hollywood, and there are no guarantees of a happy ending. The fundamental factors, including an energy crisis, heightening conflicts internationally, and uncertain economic conditions won’t go away on the basis of a single positive trade — or even a series of them. Quite often, no matter how irrational financial markets can become, valuations tend to eventually reflect broad sentiment.

It’s not important any one particular trade on the S&P 500; rather, it’s the collective action. 2015 was a tug of war between the bulls and the bears. The same news we are reading today had pretty much filtered out last year, yet the financial implications of the news was yet to be determined. 2016, on the other hand, will likely be the year where that determination is made. So far, the signs don’t look good for the bulls. 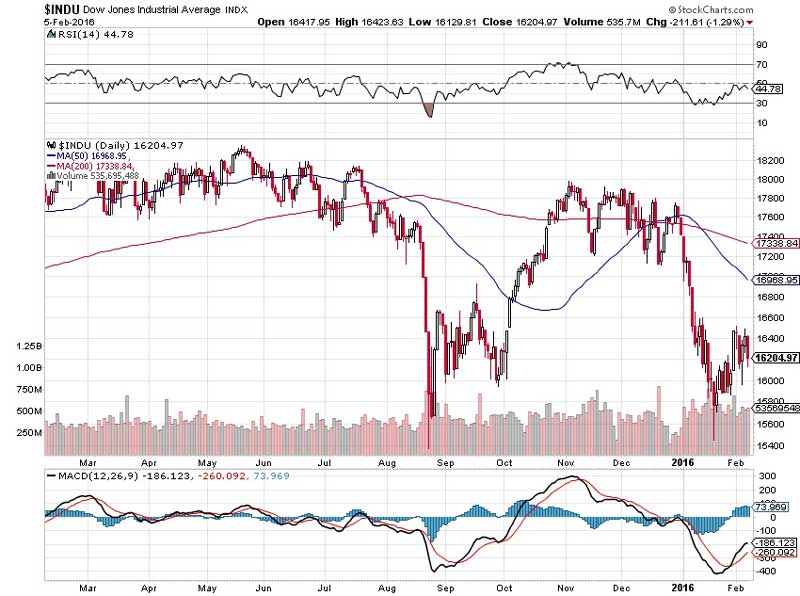 The S&P 500 is down -9% for the year, despite the aforementioned 2% lift. Essentially, the benchmark index is merely flirting on the demarcation point of market correction territory. Any bit of negative news — and it could literally jump out at any moment — would simply and swiftly drop the index back to the bearish abyss.

This is further confirmed by all the technical signals. The S&P 500’s long-term average price trends have trended decisively downwards. Other gauges, most notably the Relative Strength Indicator and the Moving Average Converge-Divergence tell the same story in a different language. The bottom line is that the aggregate total of bullish price action is massively outweighed by the bearish price action.

When considering the fortunes of a major index like the S&P 500, we must realize that only substantive and sustained data can shift the markets into a positive trajectory. We are sadly nowhere near that situation, and any assumption to the contrary runs the risk of severe capital loss.