What The Bloody Hell is Going on With Gold and Silver?

For both fiscal and political conservatives, this year’s election results were a Godsend. How else to explain the miracle that was Donald Trump’s victory? While supporters of the real estate mogul will argue that the much-touted “Silent Majority” carried the election, the reality is far more mundane — Democrats simply failed to show up. In particular, white women didn’t move the needle the way that African Americans did for soon-to-be former President Barack Obama.

In other words, the voting base for the Republicans hasn’t changed that much since 2008. What did change was participation by registered Democrats. They have consistently showed up less and less at the polls until finally, their truancy or apathy set the stage for a remarkable upset by Trump. Liberals are crying now — or in many cases, flat out rioting — but their pain will likely be subdued in four years time. They will not make the same mistake twice.

Why does this matter? Aside from the political implications, there are serious financial ones. The uneven economic recovery — if it were to be called that — has scared many individuals into hard assets. However, the precious metals complex has been given a body blow since early October, and were absolutely gutted in November. Since September 30, 2016, gold is down 8%, while silver is down 13%. 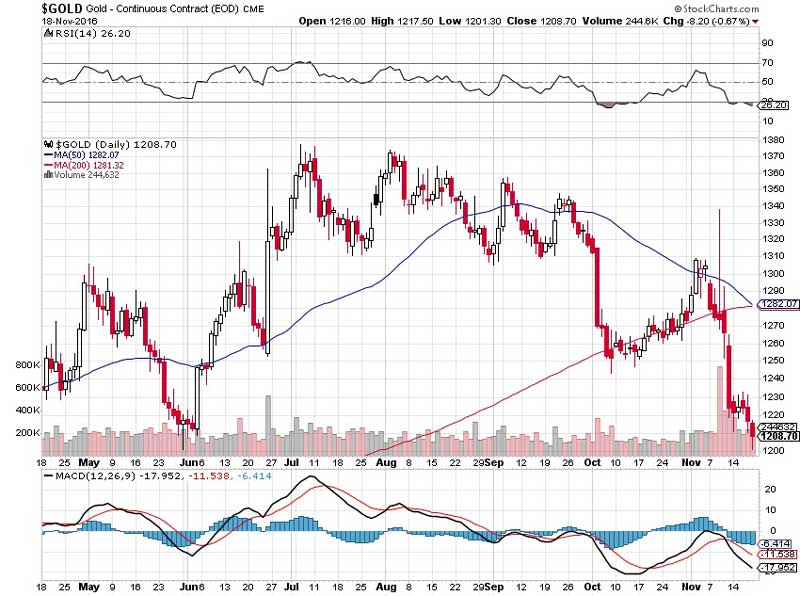 I’m afraid we have to call it like it is — a classic, unfiltered butt-kicking. For those that are unfamiliar to the markets, the sudden shift in gold and silver sentiment can be attributed to the rise of the U.S. Dollar Index. Over the aforementioned time frame, the greenback has jumped 6%. The enormity of this growth spurt cannot be overstated. Currency markets are often gauged by “pips,” not basis points. National currencies by nature should be stable as economies don’t tend to thrive under constantly fluctuating valuations.

During the campaign season, Donald Trump refused to hide his animus for the way Janet Yellen and the U.S. Federal Reserve were running monetary policy. That essentially was an attack against quantitative easing and inflationary strategies. But by winning the White House, people will be expecting Trump to carry forward his hawkishness. That may be great for the country, but it’s certainly a downer for gold and silver investors.

That’s the moral quandary of gold and silver investments — you sort of need the economy to do poorly in order to spark the mechanization for runaway inflation. But if the economy is growing, and monetary policy is stable, there’s not much reason to hold onto hard assets.

Even if Trump were to successfully rejuvenate the economy — a big “if” — the other reality is that his time in the White House may be shorter than his predecessor. The Democrats are going to wage all-out war on the Republicans, and that could very well lead to a volatile economy. Thus, even if the worst-case scenario for gold and silver occurs — that Trump boosts the economy — the idea of precious metal investments will still likely be extremely valid.