Why Brexit? “It’s The Economy, Stupid!”

Wall Street insiders and elite analysts that were caught off-guard by Brexit should re-examine one of the memorable phrases to come out of former U.S. President Bill Clinton’s campaign to unseat George H.W. Bush. Though the senior Bush thought he had the support of the American people thanks to a quick and decisive victory in the Persian Gulf War, he had underestimated the leverage of a negative economy. Regular folks, as it turned out, didn’t care so much for the war than what impact it would have on their wallet. Clinton exploited that, and the rest is history.

Many, however, are still playing the same game with Brexit, or the decision by the British people to leave the European Union. International markets were pummeled at the news that the U.K. became the first member state to leave the union. Prominent experts, such as former Federal Reserve chairman Alan Greenspan, denounced the will of the British people. Others chimed in, essentially calling Brexit economic suicide. And based on the tumultuous trading in the financial markets, it would appear that Wall Street feels exactly the same way.

Certainly, Brexit did catch many experts and financial insiders napping. Why else would the Dow Jones Industrial Average lose more than 600 points on the session following the split? With Friday’s loss, the Dow gave up all of the gains made in the week leading up to the panicked session. Of course, the biggest shocker of all was British Prime Minister David Cameron’s decision to step down.

All for what? So that the British people can determine the trajectory of their country? So that honest-to-goodness citizens of the U.K. can develop British culture the way they see fit? The manner in which much of the international media is portraying Brexit would suggest that people in their own homes should have zero right to pick the color they want to paint their walls.

This is tyranny at its most subtle. Yet the facts are very clear — the British did not so much as hate excessive government oversight as they did not having the opportunity for a better future. Since the U.K. joined the European Economic Community in 1973, there economy on a broad scale has never looked the same. 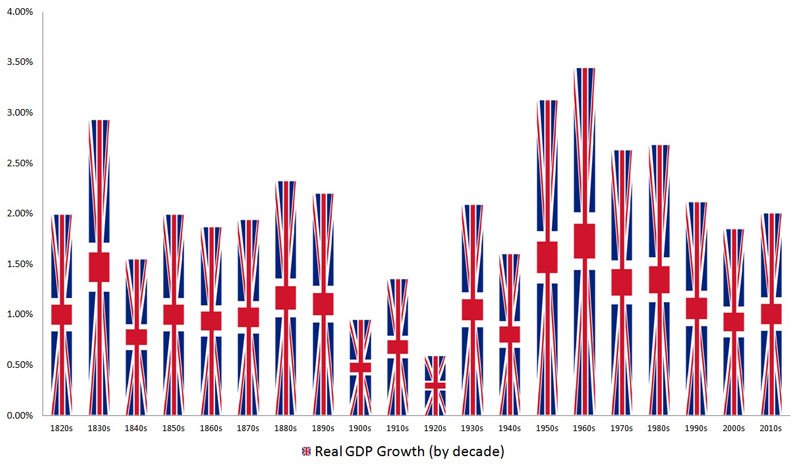 Proponents would argue that the nation’s GDP grew 6.54% in the year they joined the EEC. However, the biggest surges in GDP post-EEC occurred in 1987 and 1988. From 1989 onwards, average annual GDP growth has fallen to a pedestrian 2%. To put this number into perspective, this number is only marginally better than economic growth during World War I, and significantly less than the World War II years, where GDP averaged 2.5%.

There was really no point in feeding the giant bureaucracy that is the EU. Britons are British first, and European second. Virtually every country would feel the same about their respective identities and culture. To imply that Britons don’t have this inherent right is ludicrous. Submitting to a globalist agenda has neither benefitted them economically nor socially — as the egregious level of radicalization in British neighborhoods can attest.

Rather than view this as a net negative, investors really should take the contrarian view. This is an exciting time for the British people. It’s also my personal hope that their courage will be replicated everywhere.