Will Brexit Signal The End of Globalization?

It’s a heady call, to be sure. In just over a week since the U.K. voted to leave the European Union, proponents of globalization are doing whatever they can to reverse the will of the British people. The only certainty regarding Brexit is that the issue will be a hotly contested one. Based on the news cycle, it appears that the U.K. is far from officially revoking their EU membership. Nevertheless, if matters continue to move forward positively, Brexit could signal the end of globalization.

First, let’s be clear about the EU — this cabal is nothing more than a high-level welfare state. They take from the productive to give to the unproductive, all in the name of politically correct terms like “diversity,” “global unity,” and “sensitivity.” In any other era, the EU protocol would be labeled as soft fascism. The irony of political correctness is that all ideologies are to be tolerated except the one that exposes the agenda of political correctness.

Brexit does away with this madness. No longer confined to bureaucratic underpinnings, the U.K. can conduct business and engage in competition the way they see fit. The imposed tariffs that were part of the E.U. protectionism clause may have engendered a short-term boost for British industries, but in the long run, the lack of professional “fitness” severely curtailed the potential of the companies that tariffs supposedly protected. It’s no secret that for quite some time, British-made cars had a bad reputation for reliability. Without tariffs, the message to British automakers is clear — do or die. 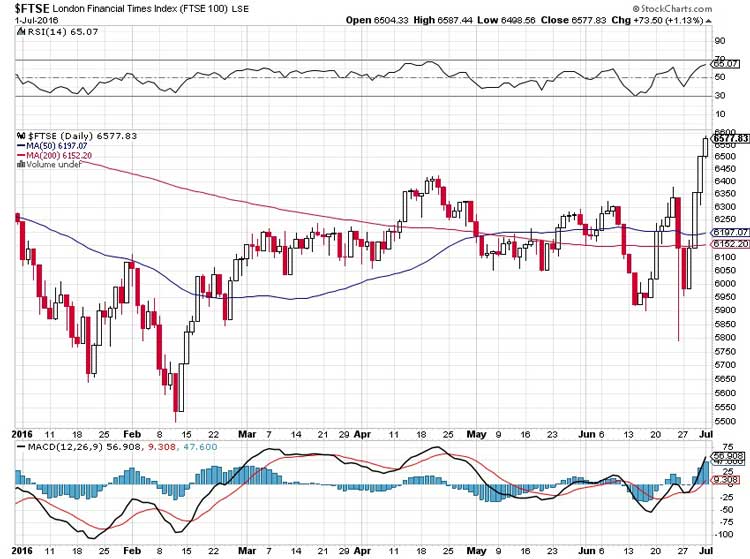 It will be a tough road ahead for the U.K. However, they are on the right path. Globalization has really not done any favors for the British. I laid out this case in last week’s article for Future Money Trends. Joining the EU did not build upon the rising momentum in economic activity during the 1950s and 1960s. Instead, Britain’s GDP went into a lethargic autopilot, and since the 1980s, GDP growth has slipped significantly.

I also made it a point that investors should consider the idea of buying the “blood on the streets.” The sudden crash in the British markets and individual stocks is overdone in my humble opinion. Britain’s benchmark FTSE 100 has jumped 10% last week, immediately recovering the Brexit losses, and then some. Although it’s not the end all, be all, it’s an encouraging sign.

Should the U.K. gain long-term success and stability — and I think there’s a strong chance of this — perhaps other countries may reconsider the globalization agenda. Yes, it’s great to be part of the “cool club” in school. But what is the price of being cool? For many countries, it’s prolonged recessions and anemic growth. Surely, there’s no status symbol worth that steep a price?