The political firestorm is in full swing, yet one sector of society has been alarmingly quiet. For all of last week, the Dow Jones Industrial Average went nowhere, gaining a pitiful 0.2%. Worse, it ended last week on a bum note, down half-a-percent, or nearly 89 points. With all that’s been going on domestically and internationally, we would expect the markets to react one way or the other. Instead, it’s been a deafening pensiveness.

In certain cases, no news is good news. But with the markets theoretically being an aggregate of all available information, the sideways trend is fairly ominous. Consider that human psychology is more risk averse than it is reward-seeking. Studies show that the pain of losing is much more intense the joy of winning. Therefore, most investors tend to err on the side of caution. And that means there is a psychological probability that the markets will fall from where they are.

But let’s play devil’s advocate. Suppose that we are bullish on blue-chip equities. What would be our logical upside target? Are we going to hit the psychological threshold of 19,000 points? That would be an amazing run on paper, but it’s only a 5% gain from the Dow Jones’ current valuation of 18,124 points. And what would get the markets to go that high? The labor market, perhaps a surge in economic activity and thus, GDP growth?

It’s unlikely that any of those things are in the cards. If the economy could be improved by pulling on specific levers, those levers would have been pulled long ago. Come on! We’re in a heated political climate. The balance of power in the Supreme Court hangs tenuously. If there was any way the Democrats could game the fiscal system to their favor, they would have generously taken advantage of it. 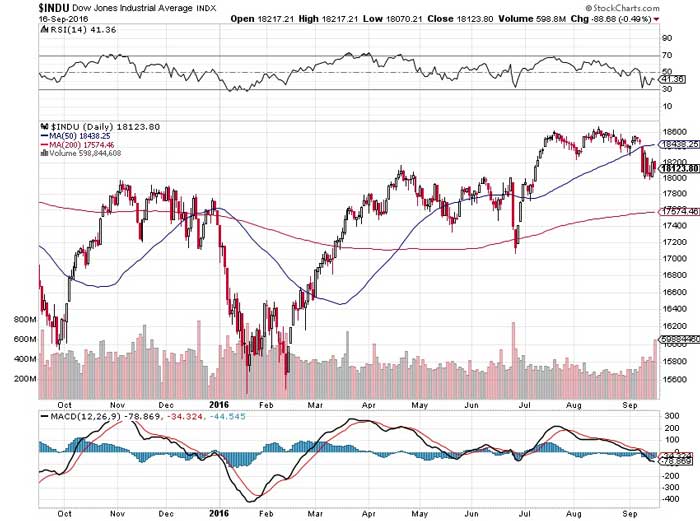 Instead, what we’re actually left with is a technical chart of the Dow that simply doesn’t inspire confidence. Recent trades have only gone sideways, and are occurring below the 50 day moving average. That’s just inviting a trip down to the 200 DMA, or a 3% drop. But from the beginning of April, the Dow Jones looks like its charting a broadening wedge pattern. Worse, if this is the case, we’re in the mid-development phase of the pattern.

That implies massive volatility. Again, if the pattern holds correct, the Dow would be facing at least 16,600 points over the next few months. That’s more than an 8% loss. But corrections are rarely so neat. If the markets fall, they could fall big time. Ultimately, we would be staring at a risk-to-reward ratio of 2:1, or greater.

That’s too rich for my blood.