Markets tumbled drastically during the trading session of April 17, with the major equity indices losing an average of nearly -1.40%. The Dow Jones Industrial Average (INDEXDJX:.DJI) was particularly hit hard, losing almost 280 points against the prior day. Sparking anxiety across the investment community was the Greek debt crisis — an increasingly painful thorn in the European Union’s side — and heightened concerns over an equity bubble forming in China’s stock market. Economic unease of this magnitude typically bodes well for gold and silver bullion, which naturally operate as hedges against fiat currency-generated volatility. However, reality hasn’t been so kind, especially for silver: year-to-date against January’s peak price range, current valuations are down nearly -6%. Can investors hope for some magic for a year that started off promisingly?

Over the last 20 years, quarterly performance trends of the silver market has, in general, shared a direct relationship with market returns three months later. That is, investors can often bank on the probability that bullish trends in the past would usually translate to bullish trends in the immediate future. Likewise, those looking to hedge their positions in the metals could use recent volatility as a forewarning of more pain to come.

As it stands now, the lagging quarterly performance (past 90 days) of silver bullion is approximately -1.93%. Given similar technical conditions since 1995, the white metal’s chances of rising higher by July of this year is poor: only 37.5%. The reward for taking a gambler’s bet today is only an average profit potential of 4.69% whereas the risk is an average loss of -5.13%. In short, the markets are very choppy and the conditions are not favorable to make a directionally biased call. 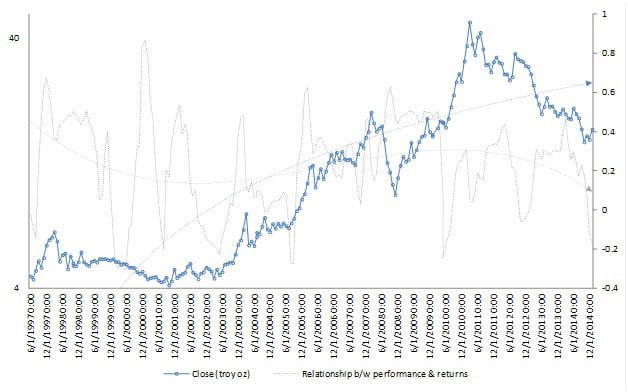 But on a longer term scale, we may potentially see the fireworks that many investors feel is long overdue. There is evidence to suggest that extreme changes to the statistical relationship between past market performance and future market returns result in high-magnitude price swings. Such changes can be witnessed now, where the relationship is at an extreme low whereas the price action itself is attempting to build a support level. Because of the predictably cyclical nature of the relationship, we can expect a response to the other side of the spectrum. When this occurs, it is only natural to anticipate a bullish reversal in silver’s spot price.

It may take some time, however. The aforementioned statistical analysis gives very poor probabilities that silver will be trading higher during the coming summer months. Instead, investors may have to wait until the fall to winter season before the fireworks begin. This also happens to be the traditional strong season for the precious metals complex.

All in all, silver bullion, despite taking some recent beatings, looks poised to recover significantly by the end of this year.