Crunching The Numbers Behind The Transportation Industry

According to a recent Yahoo Finance article which cited statistical analyses conducted by NPR (formerly known as National Public Radio), truck driving may be one of the core catalysts of the alleged job market recovery in the United States. Although the findings are based on particular modulations of data pulled from the U.S. Census, NPR’s studies revealed that in 29 states, “truck drivers made up the majority of full-time working adults in 2014.” The article’s writer, Mandi Woodruff, goes on to exclaim that the trucking industry “it seems, is immune to the effects of globalization and automation — two trends that have sent blue-collar jobs in the U.S. spiraling toward extinction over the last four decades” (Woodruff, Mandi. “Truck driving may be America’s most popular job“. Yahoo Finance. February 6, 2015. Web.). The rise of the truckers reflects a paradigm shift in the economic landscape, with the most popular job in 1987 being secretary, and in some states at the time, it was farmer. On surface level, this change runs counter to the mainstream criticism that the nation is a service-oriented economy, one that has a decreasing manufacturing and production base. However, there are important caveats to consider within the trucking bull market.

The large 18-wheelers that take up an inordinate amount of roadway real estate are suffered silently by a majority of drivers with the justification that they are hauling commodities critical to societal functioning. Yet the trucking category is a broad one which also includes private courier services, such as FedEx or UPS. For the latter, e-commerce shipments accounts for nearly half of domestic shipments, thanks to the popularity of online retailers like Amazon or eBay. Most of the consumer dollars that are responsible for discretionary purchases are income for professional business services, which still dominates the job allocation for the middle class on a per capita basis. Commercial truck drivers, in contrast, make an average of a little over 17-dollars an hour, according to Ms. Woodruff’s article. While policy makers can hoot and holler over the supposed rise of America’s production base, the optimism is disingenuous if it is merely driven by what is left of the middle class, a category that is in severe decline. 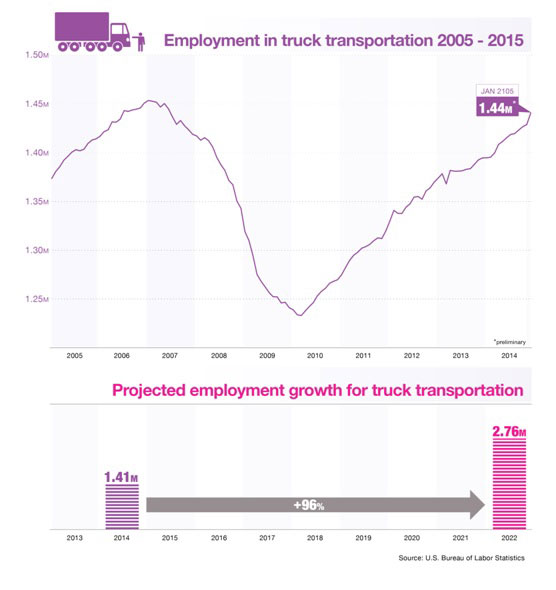 This makes the Bureau of Labor Statistics recently forecasted projections for the trucking industry all the more perplexing. According to their dubious methodologies, employment growth in truck transportation will increase to 2.76 million by the year 2022, a near two-fold jump from 2014’s figure of 1.41 million. The government’s forecasting is woefully inaccurate since it’s fairly obvious they are employing linear regressions, which are blind to fundamental economic shifts. Reverse engineering the BLS methodology is a simple matter of calculating the growth rate between mid-2009 to January of 2015, and multiplying that rate over the next seven years. The fact that the government’s own bureau that has statistics in its name relies purely on elementary school algebra is alarming on a number of levels and should give serious concern as to their highly politicized messages.

The ultimate context behind this latest revelation is that nothing has truly changed. While it is true that the trucking industry has surged, so has many other occupations, especially since the measurement is conducted within a biased framework post-2008. If the study reflected growth since 2006, the industry would be in decline. Thus, the famous words still apply: there are lies, damned lies, and then there are statistics.