July 8, 2015 will go down as the day of cyber infamy that no one has ever heard of. In a seemingly impossible series of circumstances, the New York Stock Exchange, the Wall Street Journal, and United Continental (NYSE:UAL) all experienced temporarily debilitating “computer glitches” that quickly reverberated through breaking news alerts. What was odd, though, was just how abruptly the masses dismissed the events as mere coincidence.

Blame the uneducated and hopelessly naive public. Despite the fact that the magnitude of the damage — both reputational and functional — was enough to justify a briefing with President Barack Obama, followed up with a White House statement, the near-instantaneous denial of any nefarious activity by governing authorities was apparently enough to satisfy the media’s curiosity.

Hello? Think McFly, think! It is the media’s job to investigate, not to take statements — no matter the source — as the words of Jesus Christ in bolded red ink. In this regard, this was a major failure, not only of journalistic integrity but of mere common sense. How can the authorities be so quick to rule out cyber-terrorism when the explanation of the malfunction at the NYSE was ambiguously blamed on “technical” issues?

The answer is that while the purported explanation of coincidence is possible, it is not probable. Using models commonly deployed in advanced financial analysis, we can determine the individual odds of the strange events of July 8: 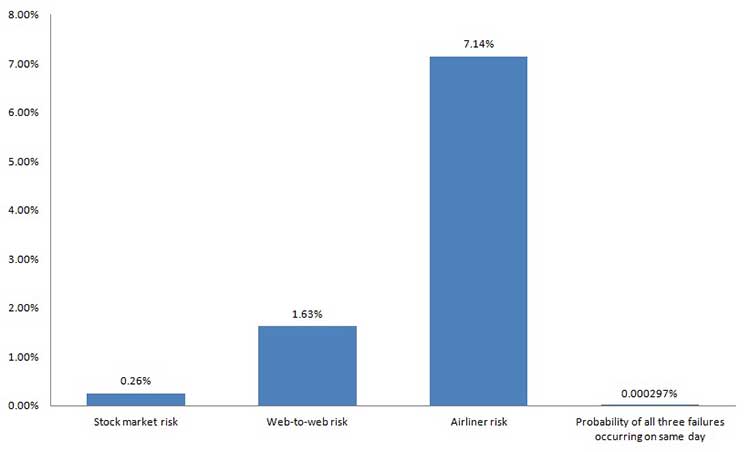 The average odds of any one of these incidents occurring is quite low, at approximately 3%. However, the likelihood that all three would occur around the same time? It’s exponentially lower, at 0.0003%, or roughly, 1 in 300,000 odds. Again, this is not mathematically impossible, but it’s similar to the odds of throwing a single grain of sand into a typical school-ground sandbox and expecting to find it.

Given that the probability is so stacked against random coincidence, it would behoove authorities to shut their mouths until they find the correct or most likely answer. But by not looking into the cyber-terrorism angle, they are ignoring a very critical component to the investigation, one that could bring us all closer to the truth and to find solutions to prevent such an occurrence in the future.