Can The DAX Continue Its European Dream Ride?

While most eyes are understandably focused on the remarkable bull market in Chinese equities, the European sector is hardly a laggard. Buoyed significantly by the DAX PERFORMANCE-INDEX (INDEXDB:DAX), Germany’s equivalent of our S&P 500 index is up nearly 17% year-to-date. However, some negative financial performances by top German companies, including European stalwart Deutsche Bank AG (US) (NYSE:DB), has led to questions regarding the future trajectory of the DAX.

Since first breaking the 12,000 point barrier in March of this year, the German benchmark index followed up with an overall lackluster showing in April despite breaking an all-time single-day closing record. The situation hasn’t improved appreciably this month, with the index trading inside a very tight consolidation range. Based on other technical metrics, including the Relative Strength Indicator (RSI), the Moving Average Convergence-Divergence (MAC-D), and the variance between different simple moving averages, sentiment is shifting bearishly.

Should the markets continue to go awry for the DAX, the logical downside target is around 10,500 points. This is roughly where the 200 day moving average sits currently, and this level coincides with a rising support line. So long as the benchmark doesn’t appreciably cross below this point, bullish investors can confidently speculate on a recovery.

Even better, the German market statistically has a better-than-chance probability of moving higher without testing this critical support line. Based on a statistical analysis utilizing quarterly market performance as a control, the calculated probability of a bullish swing over the next 90 days is 65%. Should the forecast prove accurate, investors can expect an average return of 6.73%. 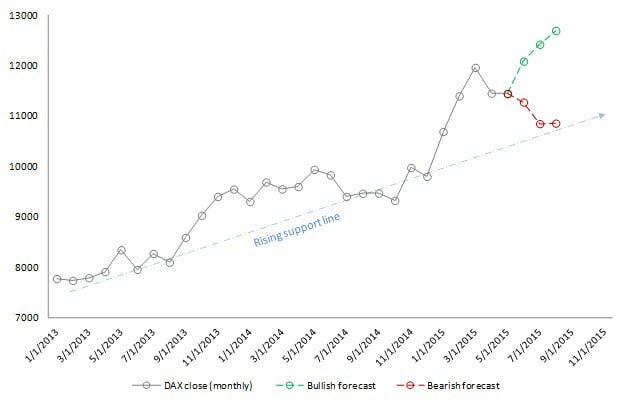 Of course, the flipside to any forecast is the risk. A failed projection — at a probability of 35% — would net an average loss of 5.4%. Though the magnitude of risk is less than that of the reward, the variance is hardly sizable at 25%. This means that for every dollar put at risk, the potential reward is only 25-cents. For conservative investors, this may not provide enough justification for taking a gamble. On the other hand, it is interesting to note that the failure probability places the price action right on the long-term support line. Translation? Even if the bears take control of the DAX over the next 90 days, they may only succeed in discounting the market instead of destroying it.

That may be enough to assuage some who are apprehensive of the German market and the European sector in general. However, one thing does seem more likely to occur than not: the next three months will be an important pivot for major European equities.