Death Cross Voodoo? A Critical Examination of the Dow Jones

Wall Street was abuzz early last week when the Dow Jones Industrial Average formed what is known as a death cross — a bearish signal that occurs when the faster-moving trend represented by the 50 day moving average dips below the longer-term 200 DMA. In market lore, this is an important harbinger of future volatility. However, the mainstream media has been quick to dismiss the uproar, stating emphatically that — for the most part — there’s nothing to worry about.

Brett Arends, columnist for the financial publication MarketWatch, summed up the popular sentiment in rather blunt — if not crude — fashion: “I call B.S. on the “death cross” bearish stock market omen.” Mr. Arends provided several specific reasons for his skepticism which can be broadly summarized in that the death cross indicator “…like most others, is just hocus-pocus, based on the selective use of data and some bad logic.” We will examine his arguments closely, upon which we will conclude that not only is Mr. Arends wrong in his interpretation of the death cross, but that his own arguments are laced in irony. 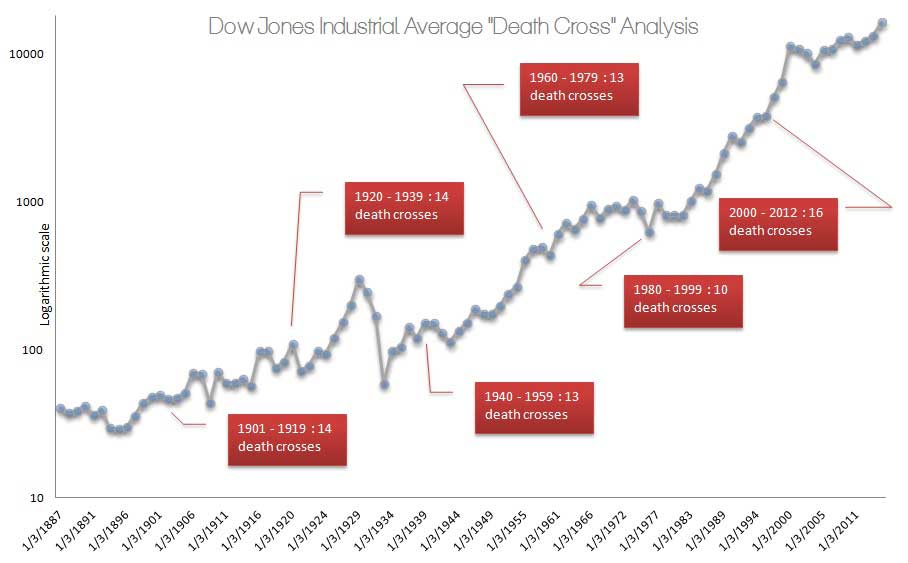 In addition, for Mr. Arends to cite the failure rate of “27 occasions” demonstrates either numerical illiteracy on his part, or that he is depending upon said ignorance of his reader base. The numerator of 27 is utterly meaningless without a denominator by which to compare. Mathematically and intellectually speaking, Mr. Arends has no right to impugn the validity of a particular methodology since he blatantly ignores the numerical distribution of his own argument — “winning a race” is not nearly as impressive if it were later found out that only one person was competing.

Mr. Arends continues: “Some instances were particularly egregious. The death cross in December 1914 got you out of the stock market just before it went up 80%.” While the argument is true, it demonstrates a critical unawareness of the Bayes Theorem — statistics require a distinction between broad distribution (ie. how many men and women live in the United States?) and conditional distribution (ie. of American women, how many are aged 40 years or younger?). A month after the death cross of December 12, 1914, the Dow was up over 5%, indicating that this particular variant was “weak” and unlikely to produce further bearishness. Technical indicators like death crosses are measurements of probabilities, not certainties. To state otherwise is to reveal intractable incompetence.

Finally, Mr. Arends proclaims that, “…in 1929 the death cross was triggered in November — after the infamous crash was over, and just before shares started rallying.” This is perhaps the most misleading of his arguments. While the 1929 death cross did engender a rally, this was merely a dead-cat bounce, a knee-jerk reaction to an unprecedented market collapse. Three months after the death cross, the Dow was down -18%. Worse yet, in a little over a year later in December of 1930, the Dow was negative by -26% against the original death cross.

The skeptical article ended with the affirmation that “…the death cross is just voodoo. We might as well read tea leaves or throw bones in the dust.” However, such jingoistic exercises do not yield a 58% probability on broad distributions — ie. what happens when the Dow suffers a death cross? That alone is worth investigating the potential validity of the death cross indicator.

But when we apply a specific condition of “strength” of the death cross, the probability yield is significantly higher. A month following a death cross, if the Dow is negative by -3% or more, there is an 84% chance that the markets will be bearish a half-year from the original signal. That level of magnitude is something that no investor should ignore.

Unfortunately, it seems that the mainstream media has a vested interest in keeping the public unaware.