Delta Airlines and The Ebola Virus

A contagion is in the air and for once, we’re not referring to the endless dump of artificial liquidity by global central banks, nor are we discussing the rapid downfall of governmental or societal ethics. It is an odd circumstance indeed for a common metaphor to materialize in actuality but here we are: the Centers for Disease Control recently confirmed the first diagnosis of the Ebola virus within American borders and its impact has been particularly fierce against the airline and transportation indices.

For its part, the CDC has been reassuring millions of Americans that the situation is under control, with the infected and the possibly compromised being quarantined and/or closely scrutinized. However, mere words have not comforted investors who have been understandably skittish with their capital. Moving forward, how will this affect the fortunes of the airlines industry, where derivative safety concerns have weighed heavily on valuations?

For this article, we will focus on Delta Airlines (NYSE : DAL). In light of substantial consolidations initiated within major airline companies in order to maximize profits under a demand-stricken ecosystem, Delta had adjusted their corporate strategies fittingly. As a result, the airliner’s equity shares was one of the big success stories of 2013 regardless of industry, rocketing up nearly 126% from January to December. The trend continued into early June of 2014, when the share price hit $42. Since then, the price action entered a bearish cycle, with current valuation at time of writing down 16% from the June peak. 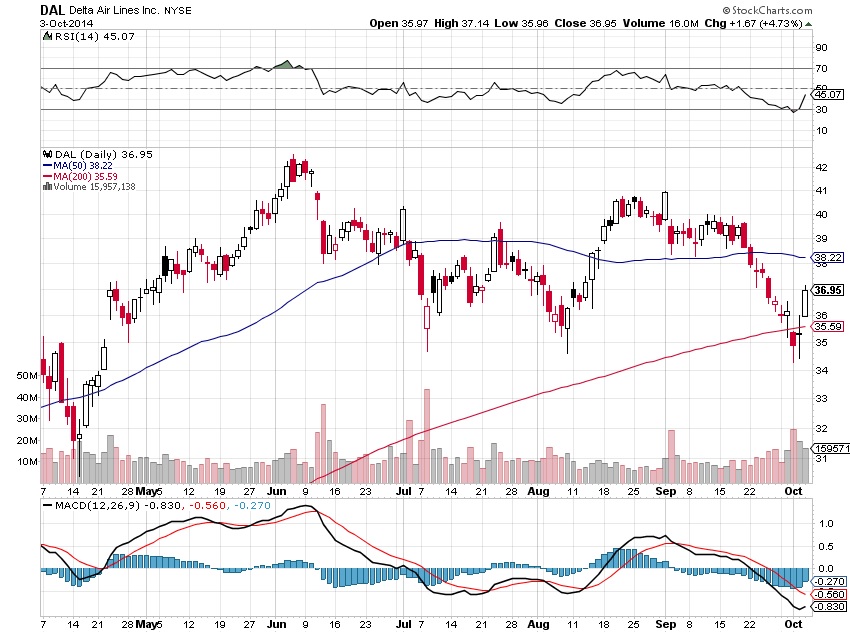 Those investors that were originally surprised by Delta’s shock move from last year are no doubt looking for an opportunity to get back on board. Its stronger financial position as compared to years past, and the increase in income trends, particularly gross profit margin, provides fundamental reasons for optimism. However, from a technical discipline, bullish buyers may want to exercise some patience.

Against a long-term backdrop, the 50 day moving average has clearly lost momentum, and is now angling towards the lagging 200 DMA. This is a significant development as the bearish crossover has not occurred for almost two years. Having run up a “deuce” in valuation since January of 2013, investors are signaling a lack of confidence that the price action will hold, especially at these lofty levels. 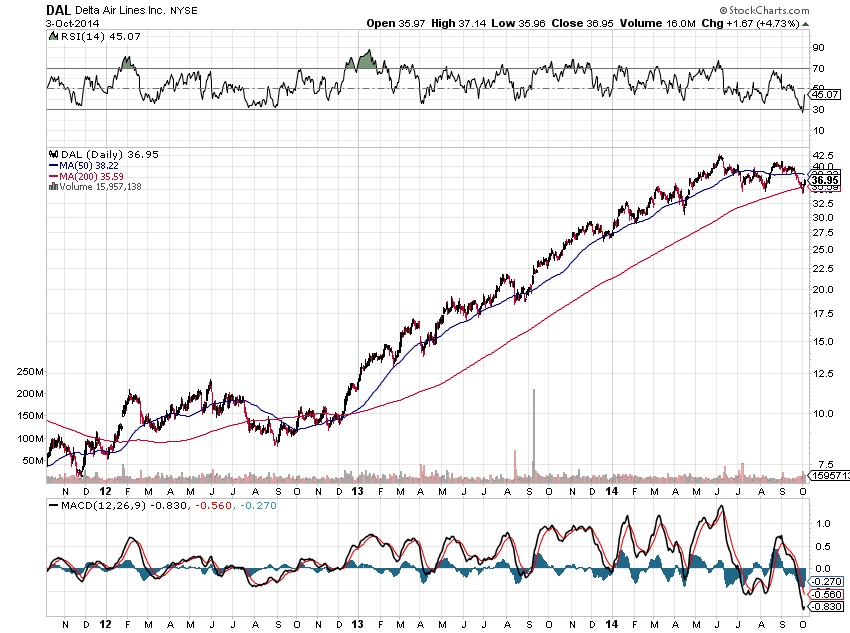 The main technical indicators, the Relative Strength Indicator (RSI) and the Moving Average Convergence-Divergence (MAC-D), also confirm bearish probabilities. Notice the MAC-D specifically, where its wide undulations have decisively twisted negative. Although this is by no means a magical crystal ball, it does suggest that traders are not willing to sustain efforts to move the price higher. Since these market participants have been eyeing the lagging 200 DMA, in which the current (time of writing) price has been hanging right below it, it’s a safe assumption that a majority of the smart money will hold back, letting the minions do the heavy-lifting while they strategize for their next big move.

Delta’s top management has demonstrated competence and the willingness to adapt to shifting business environments. It hasn’t been easy and there are still many bumps left in the road. However, the positives do outweigh the negatives and there are ample reasons why investors should consider a position in Delta. Picking the right valuation is obviously the key.

Given the precarious technical condition of the share price, investors may want to look for support between the $27.50 to $30.00 range. The recent Ebola scare, perpetuated by the mainstream media as well as the CDC to some extent, has unfairly penalized the airlines industry as a whole. That provides the smart money with a discounted price for a quality name: just be sure to exercise some street smarts as the volatility may not be over quite yet.