Deutsche Bank Just Upgraded Valero Energy But Will It Continue to Rally?

The oil sector has been a contrarian favorite in recent months and for good reason. Since bottoming in the opening month of 2015, the international benchmark Brent Crude has been steadily gaining steam, up approximately 22% since the middle of January. The domestic index for light crude oil — West Texas Intermediate — has exhibited more volatility than its counterpart yet is up a healthy 12.6% over the aforementioned time frame.

In conjunction with significantly improved sentiment towards the major oil indices is the overall performance of several industrial producers and equipment providers of black gold, which has borne witness to a near-term renaissance. Especially amongst mid-tier and junior producers, this sector veritably exploded in valuation growth over the past 90 days. It is therefore of little surprise that investment powerhouse Deutsche Bank AG (NYSE:DB) recently upgraded their call for Valero Energy Corp. (NYSE: VLO) from “hold” to “buy.” Other investment research firms, such as Zacks Equity Research, rank Valero as amongst their top stock picks.

A number one pick and the Germans love it. What could go wrong?

Valero is a more complicated beast than mainstream prognosticators are letting on. For starters, it is easy to see why the company has re-emerged as a financial media darling: since the end of 2010, equity valuations has skyrocketed more than 350% despite the oil market collapse of 2014. That’s the kind of performance that Wall Street rarely dismisses. And since humans are creatures of habit, there is a biased tendency to believe that current strength will beget future profitability.

Such an assumption, at least for Valero stock, is technically valid. Over the course of the past three months, the average market performance of VLO is 4.84%. Using this metric as a statistical control, it can be determined through past historical data — going all the way back to Valero’s initial public offering in January of 1982 — that the average return over the next three months will be 19.69%. That is, by Friday, July 10, VLO will be trading hands at around $74 per share. 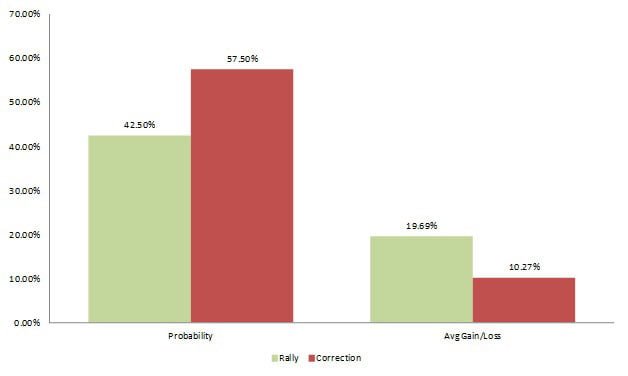 This certainly justifies Deutsche Bank’s and Zacks’ enthusiasm for the company. However, using the same statistical methodology above nets a likelihood that VLO will be in the black at only 42.50%. There is a less than random chance probability that a bullish investor will reap the 20% average market returns. More often than not, the technical conditions currently experienced by VLO results in a 57.50% probability that shares will move south, to the tune of $55 by the second week of July.

So is Valero a fool’s pick? Not necessarily, since we know that whether the stock moves up or down, it will do so with a high degree of magnitude (+20% vs. -10%). The smart money will instead employ an advanced options strategy to straddle bullish call options and bearish put options at the identical strike price. In this manner, the investor plays the market movement instead of betting on a directionally biased forecast.

Which would, of course, qualify as a sucker’s bet!