Frequently discussed by Future Money Trends founder, Daniel Ameduri, as well as leaders within alternative media, the rising cost of higher education is setting up an unstable bubble. Regardless of what institution is selected or the chosen field of specialty, the unique economic challenges facing the current generation of college students is rapidly accelerating education costs beyond their real or even perceived forward-value. The incredible debt burden of student loans will inevitably curtail enthusiasm for college applicants, hurting both the scholar and academia alike.

Case in point is DeVry Education Group Inc. (NYSE:DV), which owns the subsidiary DeVry University. After its share price went on a two-and-a-half year rally since the summer of 2012, bullish momentum began to wane in November of last year. The market veritably went bearish when DV stock plummeted this past February and any hopes of a recovery were dashed on Friday, April 24, when DV closed down more than 18% against the prior session.

The primary reason for the fall from grace? Despite beating Wall Street expectations for profitability in the third quarter, revenue for the education and training services provider was down, largely due to a persistently negative enrollment trend for DeVry University. Recognizing the situation, DeVry’s management outlined a turnaround plan for their struggling flagship but is it a case of too little, too late?

The facts are undeniably staggered against a comeback for at least the next quarter. Using a 90-day lagging average performance metric as a control (non-inclusive of the April 24 trade), the statistical probability that DV shares will be trading at a higher price come late-July of this year is a measly 52.5%. An advantage of only 2.5% above random chance is roughly the same probability of the long-term bias of the S&P 500 (run a histogram analysis of the benchmark index to prove this). Worse yet, getting the call right leads to average gains of 14.4% but getting it wrong leads to a 16.3% penalty. In other words, the risk-reward ratio favors the short-sellers, which is a fairly unusual circumstance for a New York Stock Exchange traded company. 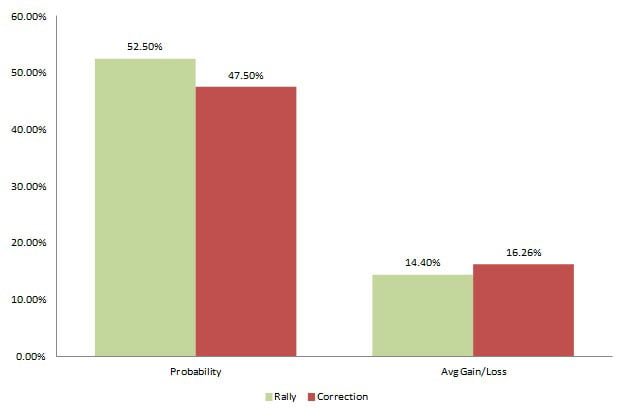 Using the same analysis above but inclusive of the April 24 trade, the forecast is severely bleak, with a 93% probability that DV stock will continue to plummet! This is more of an indictment of the underlying economy than it is with DeVry management. If even under-skilled workers see no confidence towards job prospects after receiving certified training or a specialized degree, what hope is there for education providers and their efforts for a turnaround?

The academic industrial complex may very well be facing a bubble similar — or perhaps greater — in scope than the housing bubble a decade ago. One of the confirming indications is how poorly education providers are performing in the financial markets.