If you’re like millions of Americans, you tuned in Sunday night to watch the closing ceremony of the vibrant, but trouble-plagued Rio Olympics. The games were well-mired in controversy before athletes started to pour in, with issues such as crime, the Zika virus, and poor infrastructure providing plenty of harsh headlines. But another problem has taken center stage, and this time it has nothing to do with Brazil.

It’s no secret that the television medium has been on the decline since the advent of streaming entertainment. Even the big screen is not immune to slowing demand in traditional platforms. Thus, it was no surprise to hear that viewership for the Summer Olympics has also been on the decline. However, the sharp rate of erosion is enough to give jaded analysts pause for thought.

According to Daniel Roberts of Yahoo Finance, “Television ratings for the Summer Olympics in Rio on NBC have not been good. They have been bad. They have fallen 17% from four years ago in London. Before the Olympics began, Bloomberg points out, NBCUniversal CEO Steve Burke said that his “nightmare” would be a 20% ratings drop. That has basically happened. And if you drill down to 18- to 49-year-olds, it did happen: ratings fell 25% among that key group.”

By any measure, the ratings performance is a complete disaster. That’s got to be worrying for NBC, which has exclusive rights to the Olympics until 2032. Even more so, demographics are going to be an issue. Yes, baby boomers will continue to watch through traditional media platforms. However, engaging them will be a tough challenge. Those who are actively working — ie. the Millennials — can be engaged. And they are almost always on social media.

Here’s the deal about the pesky Olympics coverage. Digital viewership is up exponentially at the games. Last Saturday, 155 million minutes of coverage were streamed live. That’s up 263% from the same day of the London Olympics. 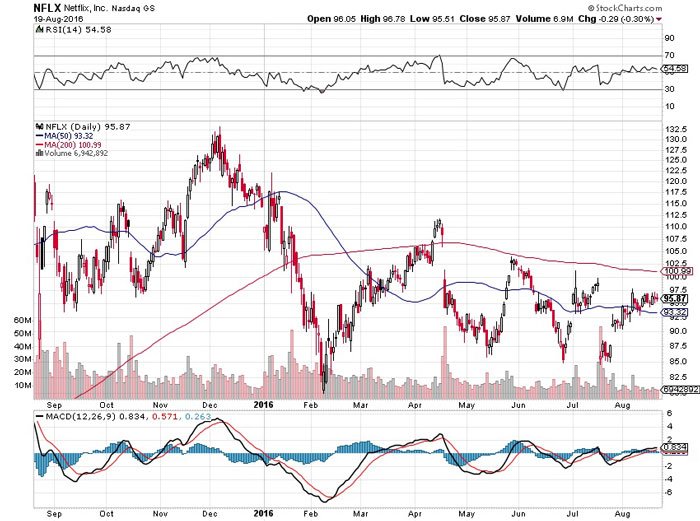 Streaming and the general idea of digitalization is in — everything else is going to take a hike. That’s why I’m not too downbeat on Netflix, Inc. (NASDAQ:NFLX). Yes, the stock is down 16% year-to-date, and yes, that entails significant technical risk. Fundamentally, though, the company has a massive tailwind. Demand is virtually guaranteed to move towards digital and social media, not away from it. The hits that the organization takes is largely based on misguided expectations.

I just don’t think we’re going to see triple-digit annual returns for NFLX. The phase of easy money is probably over. That said, it doesn’t mean that Netflix is suddenly a bad investment. Shares have been moving in a sideways consolidation — they haven’t dropped off the face of the earth. I would be worried if Netflix was a movie theater chain, but they’re not. They’re in the right place at the right time.

This year’s Olympics coverage gives you all the data you need to know.