As one of the earth’s rarest precious metals, platinum’s mystique extends deeply into the collective cultural consciousness. According to jewelry specialists Flash Manufacturing, all the platinum ever mined in human history would fit inside the space of an average living room. Contrast that with gold, where the equivalent figure is often stated to expand to the square footage of an Olympic-sized swimming pool. Allegedly, Louis XVI of France once proclaimed that platinum is the only metal worthy of royalty, and throughout its relatively short life as a traded commodity, its spot-price has reflected this supply and demand based premium. Rarely has gold’s market valuation approached a one-to-one ratio with its more illustrious cousin, and even rarer still has the yellow metal exceeded the price of platinum. But as we approach this very scenario again, a definitive “blood moon” event for the commodity markets, what does that imply for the precious metals complex in general? And should investors advantage what seemingly appears as a discount of a lifetime?

Historically speaking, platinum almost always maintains a premium over gold. According to a 2012 Forbes.com article by Adrian Ash, the most pronounced period when platinum lagged gold was in December 2008, a technical abnormality that only lasted for three trading days. Before that, the recession of 1991 and the disinflation of 1984 provided the acutely rare backdrops for the unusual dynamic (Ash, Adrian. “Gold Becomes Pricier Than Platinum, That’s Rare And Scary”. Forbes. April 12, 2012. Web.). As such, any momentum for gold bullion in excess of the acceleration in platinum has always been a warning flag for professional traders, who have been quick to dump out of positions given the extraordinarily consistent historical propensity. In theory, however, the inverse position, or the acquisition of platinum, should provide a higher probability of positive returns.

On a broader technical scale, some caution is advised. While gold has had strong performances against platinum in recent years, the context involved a secular bull market supported by unprecedented fiscal engineering by the Federal Reserve. Though the underlying economic conditions are arguably just as tenuous, if not more so than during the reign of former Fed Chairman Ben Bernanke, the new monetary policies governed by Janet Yellen has been, in a word, confusing. The chaos has further manifested itself in unusually high equity valuations and a decided bear market cycle in precious metals and hard assets in general. Thus, the current reality is that neither gold nor platinum may be considered a discount in the near-term perspective, and that the tightening of their price ratios is a reflection of investor psychology, not of one metal’s intrinsic worth against the other. 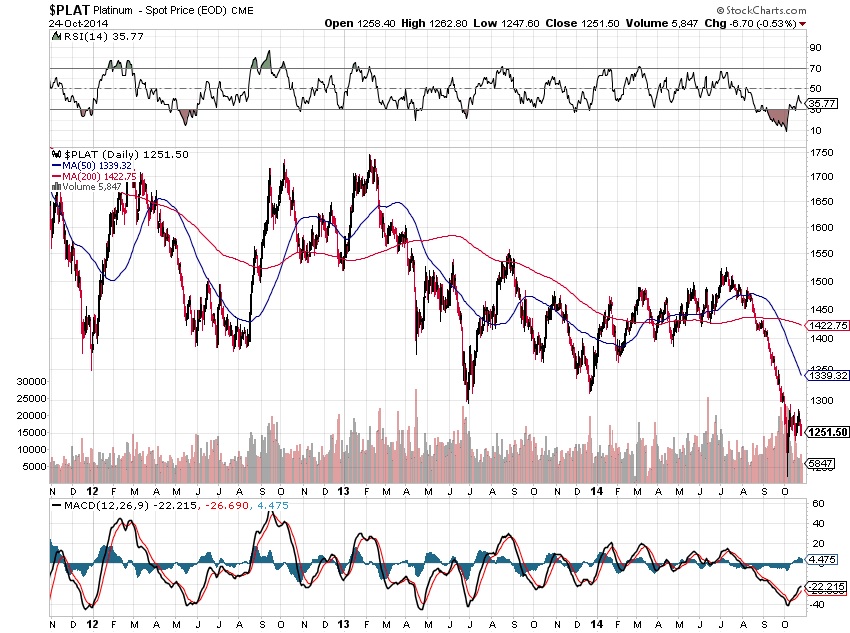 A look at the long-term chart of platinum better illustrates this conundrum. Where gold suffered seemingly intractable losses in the spring of 2013, platinum maintained some semblance of respectability during the same time period. It wasn’t until mid-summer of this year that the esteemed white metal suddenly fell victim to gold’s cruel fate. Even then, it took until just recently for platinum and gold to approach a (dreaded?) one-to-one ratio.

In hindsight, the factors leading up to this abnormal condition are clearer. Gold was simply abandoned by the professional investment community as the place to be was firmly in the domestic blue-chip sector. Platinum faded but still traded at relatively lofty levels due to its industrial utility. But as global economic indicators imploded this October, so too did platinum.

An argument could be made for “contrarian investing,” buying up positions of unwanted assets, especially those with demonstrated intrinsic value. Ironically, however, the better discount may be in gold. Because platinum is so tied to industrial well-being, it could easily fall below gold’s valuation, especially if global conditions in Asia and the Eurozone don’t improve substantively. In that case, the rise of a new cycle of fear may actually benefit gold (and perhaps silver) over its PGM (Platinum Group Metals) counterparts.