DOJ To Probe Gold Price Fixing But What To Do In The Interim?

Just recently, Bloomberg ran a controversial headline that the U.S. Department of Justice will investigate accusations of gold and silver price fixing by major financial institutions. Stemming from the ongoing success of extracting information from the LIBOR scandal — where currency traders were caught manipulating the benchmark London Interbank Offered Rate for profit — the DOJ hopes to resolve improprieties in the bullion market, as well as possible illegal activities within U.S. Treasuries and certain types of crude oil markets.

On paper, the Justice Department will expand the scope of their financial crime analytics program to uncover statistically aberrant transactions within the gold and silver markets. Realistically, however, this would be a time-intensive project that would undoubtedly run in conflict with higher — and perhaps hidden — interests. Therefore, the DOJ would prefer the old-fashioned route: getting big banks to rat on each other and thereby saving all entities involved unnecessary headaches.

That may be fine and well for the fat-cat establishments but where does it leave the general investing public? Should gold investments take a sideline while government agencies tinker away in order to make the markets fair? Either way, this has all the appearance of the fox guarding the henhouse.

In the near-term, the technical trajectory of gold bullion — as measured through the SPDR Gold Shares (GLD) — is unfavorable. This is not an indictment on the asset itself but rather, a purely traditional interpretation of gold’s price action. The bullion market has had a very negative slant since a pennant formation collapsed in December of 2012 and subsequent trades have not approached the support levels witnessed in that year.

If we were discussing a corporate share as opposed to gold, such chart patterns would be indicative of either poor executive management, or a severe disruption in the company’s industry. Management issues can be resolved but would require painfully difficult eliminations of personnel. On the other hand, an industry-based disruption would be a tall order to address no matter which team is manning the helms.

For gold, neither situation applies. If anything, the uncertainty placed upon global economies would be enough to bolster gold prices. However, with price-fixing now being a mainstream issue, it is hard to predict a forecast for gold with any real reliability. Nevertheless, there are some key developments that should encourage gold investors. 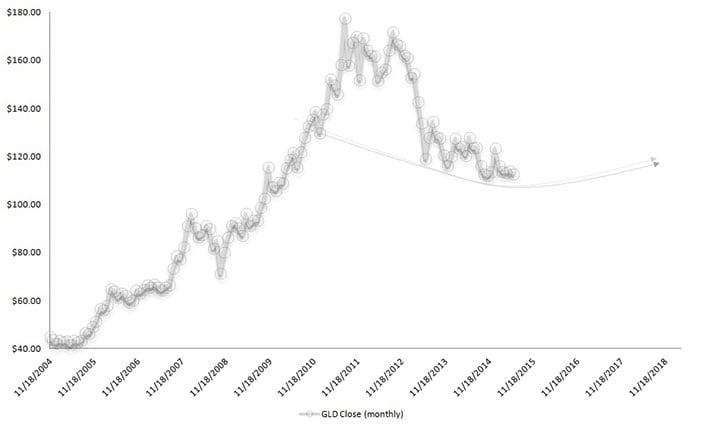 First, although the bullion market has declined severely since the parabolic highs of 2011, and the “support days” of 2012, the velocity of bearishness has also noticeably declined. Thus, an argument could be made that we have entered a period of consolidation: neither bulls nor bears have a distinct advantage. In such phases, the next great move will determine the course of the markets for several years.

Second, because of the slowing bearishness and the entering of a consolidation phase, the gold chart appears to be forming a rounding bottom pattern. This occurs when fundamentally sound assets are building a base to eventually explode higher into another rally. While such patterns may take years to work out, it does lend hope for those willing to take a long-term perspective.